WASHINGTON - A jury Wednesday convicted the three men charged in the death of Ahmaud Arbery on multiple counts, including malice murder for one defendant, in the fatal shooting that became part of a larger national reckoning on racial injustice.

All three men still face a federal hate crime charge, which will is scheduled to go to trial in February.

Unlike many states, Georgia doesn’t have degrees of murder, but instead has malice murder and felony murder. Neither requires prosecutors to prove an intent to kill.

According to Georgia state law, felony murder is when "in the commission of a felony, he or she causes the death of another human being irrespective of malice." 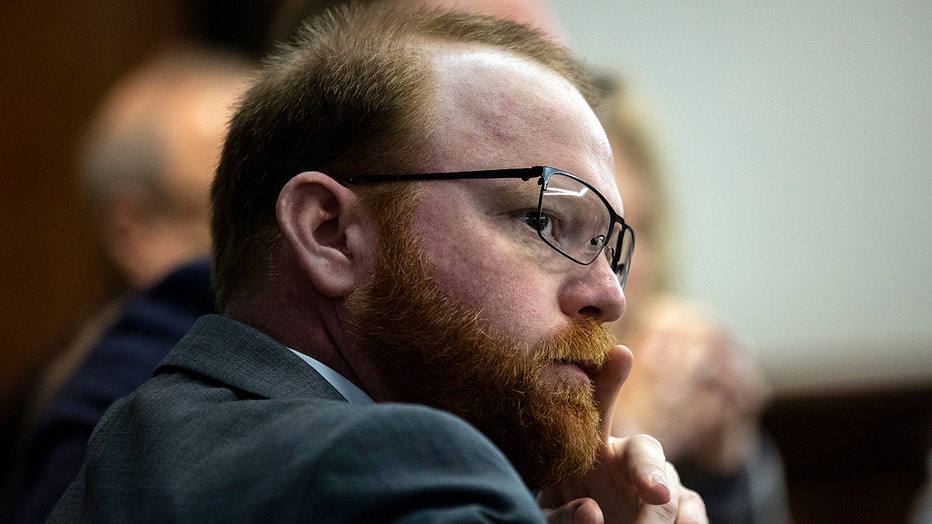 Defendant Travis McMichael watches a video clip the jury asked to see as part of their deliberation during the trial of McMichel and his son, Travis McMichael, and a neighbor, William "Roddie" Bryan in the Glynn County Courthouse on November 24, 2021

For example, felony murder applies when someone who has no plans to kill intentionally commits another felony and a person dies as a result. The person must be convicted of the underlying felony to be found guilty of felony murder.

"Felony murder is a legal statute that expands the definition of murder. It occurs when someone commits a serious or inherently dangerous felony, and someone else dies during the course of committing or attempting to commit the felony," Lawson & Berry, a law firm in Atlanta, stated. "There does not need to be intent to kill or even an expectation that someone will die once the felony is commenced. The defendant will be liable for the death either way."

To be convicted of felony murder in Georgia, the state must demonstrate that the accused is guilty beyond a reasonable doubt. This includes showing that the accused attempted or completed a felony that is deemed serious or inherently dangerous under Georgia law. Therefore, the State must show that all of the elements are present for the commission of the underlying felony, according to Lawson & Berry.

Arbery family attorney Ben Crump on Wednesday cheered the final verdict in the Ahmaud Arbery murder case. "Nothing will bring back Ahmaud, but his family will have some peace knowing the men who killed him will remain behind bars and can never inflict their brand of evil on another innocent soul," he tweeted. He added: "Today certainly indicates progress, but we are nowhere close to the finish line. America, you raised your voices for Ahmaud. Now is not the time to let them quiet. Keep marching. Keep fighting for what is right. And never stop running for Ahmaud."

"You don’t have to be the one who pulled the trigger," legal analyst Ben Taylor told LiveNOW from FOX. "If you were there and helping or assisting, that is basically what felony murder is."

A felony murder conviction carries a life-in-prison sentence with or without parole or the death penalty.

Malice murder is when a person "unlawfully and with malice aforethought, either express or implied, causes the death of another human being," according to law.

Express malice is the deliberate intention unlawfully to take the life of another human being which is manifested by external circumstances capable of proof. Meanwhile, malice is implied where no considerable provocation appears and where all the circumstances of the killing show an abandoned and malignant heart.

This essentially means the person has acted with extreme recklessness even if there was no intent to kill, said Georgia State University law professor Russell Covey.

On Feb. 23, 2020, Arbery was shot to death by a father and son who told police they grabbed guns and pursued him in a pickup truck because they believed he was responsible for break-ins in their neighborhood — a Black man, killed by two White men.

The McMichaels spotted Arbery and then pursued him in a Ford F-150 pickup. Their neighbor, Bryan, later joined the chase, which the prosecutor said lasted five minutes, in his Chevy Silverado truck. Travis McMichael approached Arbery with a shotgun and, after a brief struggle, fatally shot him.

"Out of malice, out of anger, out of trying almost intentionally to kill the person," Taylor noted further.

On Wednesday, Travis McMichael was convicted on a charge of malice murder.

Because Travis McMichael was the one to fatally shoot Arbery, he was the only one convicted with the malice murder charge. Meanwhile, his father and Bryan were both convicted of felony murder.

"You could be charged with a murder case, you can be convicted as you see, even though you weren’t there when you pulled the trigger, but you were there on scene, but the jury believes you participated in this, you can be charged and found guilty of what you call ‘felony murder," Taylor said.

FOX 5 Atlanta and the Associated Press contributed to this story.