Phoenix police are searching for a man suspected of stealing a wallet from an employee break room at a Fry's grocery store.

PHOENIX - Phoenix police are searching for a man suspected of stealing a wallet from an employee break room at a Fry's grocery store.

The alleged burglary happened at a Fry's near 19th Avenue and Glendale back on Feb. 26.

That morning, the suspect was seen on camera looking around the outside of the lounge before walking in and stealing the wallet.

He was then seen leaving in a blue sedan with a missing hubcap and some damaged paint, police said.

The suspect was described as a Hispanic male in his late 20s or early 30s with a goatee and tattoos on his neck. 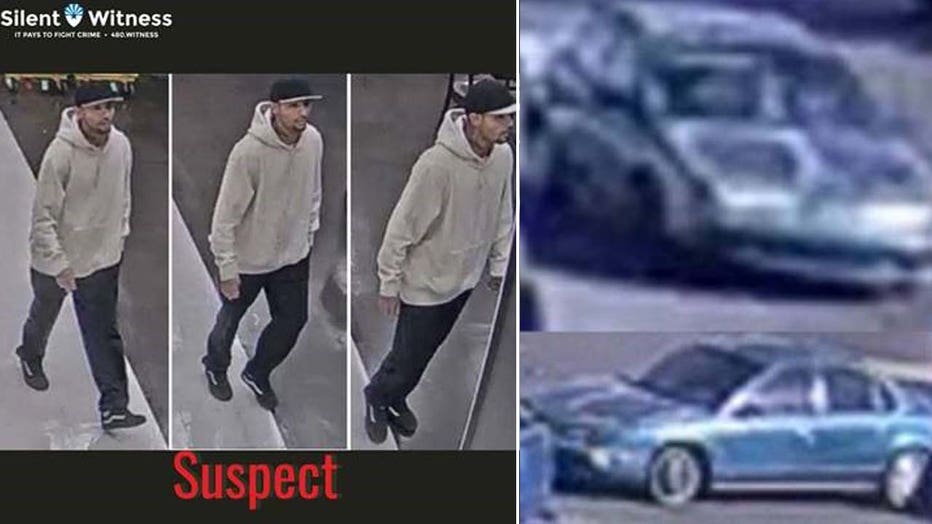 The suspect reportedly fled in a blue sedan. (Silent Witness)

Phoenix officers responded to a trouble call near 62nd Avenue and Camelback Road and found two men with gunshot wounds.

On April 29, 2014, officers were called to a home in Paradise Valley, where a 68-year-old businessman named Michael Gilman was found dead. 8 years after Gilman's death, police are still looking for the person responsible for his death.

Investigators say Aaron Mitchell drove up to the 15-year-old girl as she walked to school in Douglas on Monday.