Surfside Mayor Charles Burkett on June 28, 2021, shared a story about a young girl reading a Jewish prayer alone near the site of the collapsed condo in Florida.

SURFSIDE, Fla. - When an old high school friend lost a long battle with COVID-19, Jay Kleiman went back for the funeral from Puerto Rico to the condominium where he grew up north of Miami Beach.

But hours before the ceremony, the high-rise building in the affluent neighborhood of Surfside collapsed, leaving more than 100 people missing overnight. Now Kleiman may himself be dead, along with his mother and brother staying at the apartment.

"It is so tragic that he flew for a friend who died from COVID complications, and ended up there," said Mark Baranek, who coached both Kleiman and his friend George Matz for a flag football team from their synagogue.

Kleiman, 52, is part of a growing list of missing people along with his brother Frankie Kleiman, and his mother Nancy Kress Levin. For the family and their friends, the tragedy of the building collapse comes on top of the devastation that the coronavirus pandemic has already brought.

The family's roots in the Miami area go back decades. Like so many others in Miami, Nancy Kress Levin fled the Cuban Revolution in 1959. First she settled with her husband in Puerto Rico, and then in the 1980s she moved as a single mom with her two boys to Surfside. There, they lived in a then-new building popular with Hispanic Jews who had come mostly from Cuba. 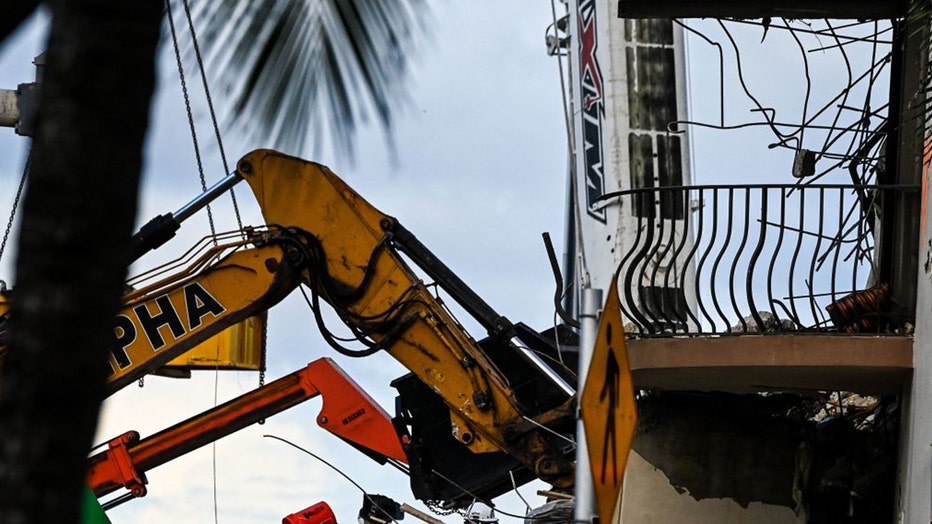 FILE - Rescue workers continue to search through rubble at the site of a collapsed building in Surfside, Florida, north of Miami Beach on June 27, 2021.

As an adult, Kleiman moved back to Puerto Rico to work with his father in the garment industry. He was used to hard times; the business suffered with the financial crisis in the Caribbean territory and Hurricane Maria in 2017. But they pulled through.

He and Matz, the friend who died from COVID-19, grew closer after they fathered children, according to another friend of Matz, Justin Gould. Their children also became friends through sleepaway camps and other trips and activities for the Jewish community.

Matz battled with COVID-19 since March, catching the virus before the state expanded eligibility for the vaccine to people 50 and older.

"He was a couple of days away from getting the vaccine," his friend Gould said.

At the funeral, the rabbi asked the congregation to also pray for all the people who were at the building.

Matz's death was not the family's only brush with the coronavirus. The father of Lauren Miller, a close friend who said Kleiman was her first love, died in January. Kleiman and his mother had checked in on Miller every day since, she said.

On Thursday, Miller saw the news on TV that the Surfside building had collapsed. She screamed frantically.

"I saw the building and I remembered the shape of the building, and I knew that was it," she told the AP. "It’s a building I had been in many times as a teenager."

She heard nothing. When she talked to the AP Friday, she whimpered on the phone, her voice breaking at times.

Miller said Kleiman's mother "was everything to him." She and Kleiman had met at a summer camp in Barryville, New York, when she was only 15, and had kept in touch over the years about their children and their lives.

"He was just always in my heart," Miller said. "Jay was not family. ... But he was the family I chose for myself."