Vice President Mike Pence visited Dallas Sunday to get an update on the COVID-19 response here in Texas.

DALLAS - Vice President Mike Pence visited Dallas Sunday to get an update on the COVID-19 response here in Texas. He also spoke at First Baptist Dallas.

He was forced to cancel official campaign appearances in Florida and Arizona due to spikes in coronavirus cases.

Pence spoke at the Celebrate Freedom event at First Baptist Dallas, where dozens of protesters stood outside demanding police reform in the wake of George Floyd's death.

First Baptist Dallas Pastor Robert Jeffress said Pence’s visit had been in the works for a year now.

People had their temperatures screened as they arrived, and everyone in attendance was encouraged to wear a mask.

“We'd all be better served if those leading the response were at their desks working their butts off instead of having political rallies,” Jenkins said.

Pence tried to strike a balance between caution and celebration while addressing hundreds of people inside First Baptist Dallas.

Pence spoke about faith and government, in a setting exempt from state occupancy limits.

“We believe that faith and family, not government and bureaucracy, are the true way of life,” he said.

The chair of the President’s Coronavirus Task Force also spoke on the pandemic further affecting Texas.

The congregation and the choir were only encouraged to wear masks, rather than required.

“Working with your governor, we will put the health of the people of the Lone Star State first,” he said. 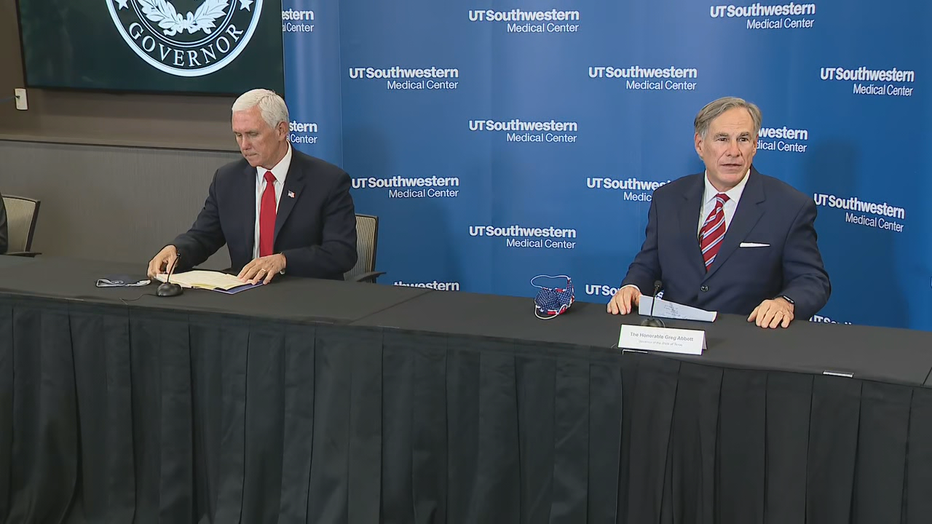 Upon his arrival to Dallas, Pence met with Gov. Abbott and other political leaders. Collectively, they attended the service, and later met for a coronavirus discussion at UT Southwestern.

“Well, we need to understand that COVID-19 has taken a swift and very dangerous turn in Texas over just the past few weeks,” Gov. Abbott said after the meeting.

Pence assured Gov. Abbott that Texas will have the resources and personnel to meet this moment in the pandemic. They also are having conversations on accelerating testing.

“We’re with you and we're going to stay with you,” Pence said.

The governor has said his biggest regret was re-opening bars but, when asked, Pence wouldn’t acknowledge any regrets from the national response to the pandemic.

As far as the pandemic goes, he told churchgoers that he’s confident moving forward.

“We’ll bring Texas and America back bigger and better than ever before,” he said.

Joe Biden released a statement about Pence's visit to Dallas.

“The Trump-Pence administration’s failure to get Americans -- including Texans -- the testing they need or offer an effective reopening plan based in public health and science has now exacerbated the pandemic in communities across the country. The agonizing reality in Texas right now is that COVID-19 cases are on the rise and hospitals are nearing ICU capacity. The state has halted its reopening. Just last week, on top of initially proposing to end funding for federal testing sites, we saw the President declare he wanted testing slowed. There are more than 130,000 reported cases in Texas and more than 2,200 deaths. Yet Vice President Pence’s trip to Dallas epitomizes the dismissive attitude this administration has taken in addressing this crisis from the onset. Our leaders should be tackling this pandemic head on and laying out concrete recovery plans for the American people -- not jet setting across the country to hold events that go against basic public health guidance. Families in the Lone Star state and across the country deserve better,” Biden said.

Political scientist looks at where Trump, Biden stand in the polls

Dr. Cal Jillson, a political science professor at SMU, talks to Good Day about the latest polls. If you believe them, they show President Trump trailing former Vice President Joe Biden in several battleground states and Texas is a tossup.