Lily Borden was recently declared cancer-free after being born with a malignant brain tumor and got to ring the bell at a hospital in California.

OAKLAND, Calif. - With the help of her parents, a baby girl in California rang a bell Friday that echoed through the halls of a children's hospital, symbolically declaring the child cancer-free.

Leann Borden said her daughter, Lillian “Lily” Grace Borden, was born Sept. 5, 2019 at 39 weeks gestation. The sonograms had been completely normal, but after she was born, a nurse noticed that Lily wasn’t moving her limbs quite right.

An MRI was ordered, and doctors found a spot on her brain stem. The family, who lives in Reno, Nevada, was directed to consult with medical staff at UCSF Benioff Children's Hospital in Oakland, California.

"It was a really bad situation," said Dr. Caroline Hastings, a pediatric neuro oncologist at UCSF Benioff Children's Hospital, who treated Lily. "She was born not moving most of her body."

Hastings said Lily was born with a high grade 4 brain tumor that couldn't be surgically removed.

After another MRI and biopsy, doctors found that the baby's tumor had grown larger and now ran from her brain stem, down to her spinal cord and below her shoulders, according to a GoFundMe page set up on the family’s behalf to cover medical and travel expenses.

As a result, Hastings said she scoured medical journals. The family’s option became general chemotherapy treatment as well as a recently approved targeted chemotherapy for tumors of a certain genetic makeup, which first needed to be approved by insurance.

"We were in uncharted territory," Hastings said.

Lily first underwent a general chemotherapy treatment at UCSF Benioff Children's Hospital in hopes of slowing or stopping the growth, according to her mother. By the time the second round of treatment was scheduled, the family had received approval for the targeted therapy.

The first MRI three weeks after use of the targeted therapy showed no sign of the tumor, according to the GoFundMe page. 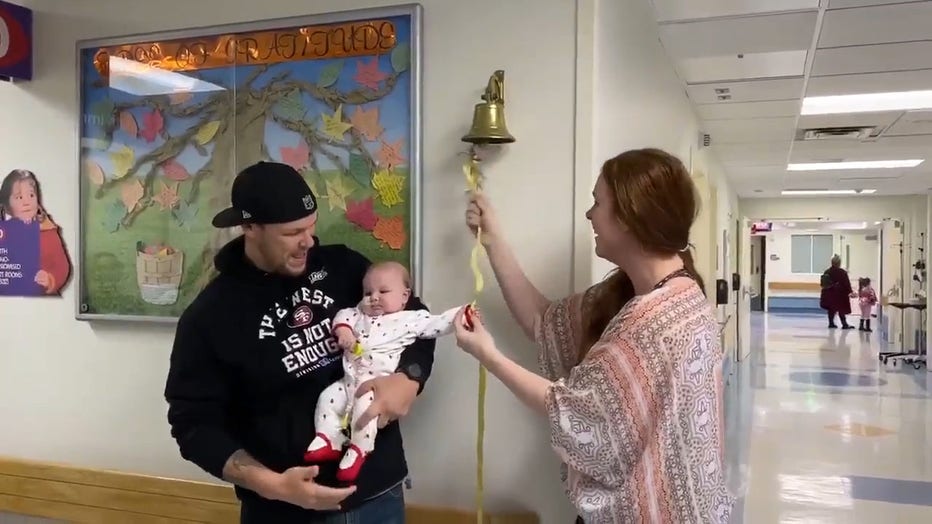 "There was no evidence of the brain tumor she was born with," Hastings added.

The diagnosis meant Lily’s parents got to ring the cancer-free bell before flying back to their home in Nevada.

"They didn't think they would be able to bring her home," Hastings said. "But Lily had an amazing response.“

Borden shared the touching moment in a video on Facebook.

“To everyone who has been through this journey with us, this is our big moment with Lily,” Borden wrote in the Facebook post. “We thank everyone who has been with us this whole time. From all of the donations, text messages and prayers. We hope you enjoy this video! And now her name will be hung forever.”

This story was reported from Cincinnati. KTVU’s Lisa Fernandez contributed.