More Americans than ever are dying young, study finds

Life expectancy peaked in 2014 at 78.9 years, and then dropped for the next three years, falling to 78.6 years in 2017, and the study's authors identified a diverse array of potential causes.

LOS ANGELES - More Americans are dying young, many of them in what should be the prime of their lives, and it’s a troubling trend that is uniquely American, according to a recent study out of the Center on Society and Health at Virginia Commonwealth University.

Researchers point to a significant increase in deaths among people aged 25 to 64 to explain the change, but it’s a complicated phenomenon rooted in more than just physical health or medical industry trends.

For most of the past 60 years, from 1959 to 2014, life expectancy of Americans was increasing. From 1969 to 1979, the rate of increase was the greatest, but it slowed over time, causing the U.S. to fall behind other high-income countries.

In 2011, the rate of increase for life expectancy of American adults plateaued. Life expectancy peaked in 2014 at 78.9 years, and then dropped for the next three years, falling to 78.6 years in 2017.

This change was due, in large part, to an increase in deaths among young and middle-aged adults.

Mortality from drug overdoses, suicide and alcoholic liver disease are major factors in the lowering life expectancy, signaling that the issue is tied to socioeconomic factors.

The greatest changes in life expectancy were noted in the Rust Belt — including the Ohio Valley, Appalachia and upper New England — where resource-based economies once boomed but began to taper off in the 1970s.

"The largest relative increases in midlife mortality occurred among adults with less education and in rural areas or other settings with evidence of economic distress or diminished social capital," the study’s authors noted.

Drug epidemics have also played a significant role in lowering American life expectancy because of the sheer number of fatal drug overdoses that increased exponentially from the 1970s onward.

The 1960s and 1970s saw a marked uptick in heroin use, followed by a surge in crack cocaine use during the 1980s, which disproportionately affected black populations.

With the 1990s came trends of abusing and overusing prescription opioids. OxyContin was introduced to the market in 1996, and this led the way for another surge in heroin use — many patients who became addicted to prescription opioids turned to heroin.

Then came the emergence of synthetic opioids (fentanyl analogues), which spurred a significant increase in overdose deaths beginning in 2013.

It was white populations that first experienced the largest surge in overdose deaths in the 1990s, and the study’s authors suggest that this is likely due to greater access to healthcare, and therefore prescription drugs.

“However, the increase in opioid-related deaths is only part of a more complicated phenomenon and does not fully explain the increase in midlife mortality rates from other causes, such as alcoholic liver disease or suicides (85.2% of which involve firearms or other nonpoisoning methods),” the study’s authors said. 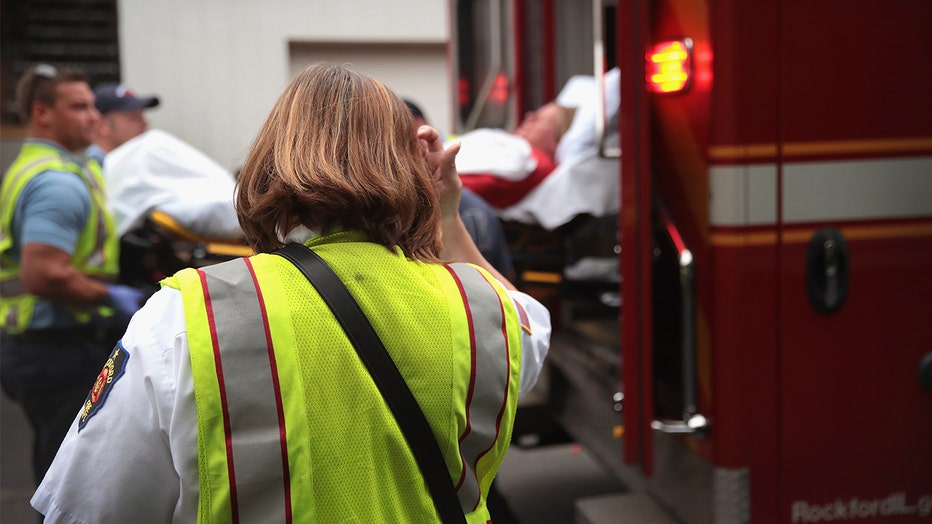 Firefighters transport an overdose victim to a hospital on July 14, 2017 in Rockford, Illinois. Rockford, a city of about 150,000 located in northern Illinois, averages about 2 overdose deaths per week, most which are heroin related. Nationwide, an e (Scott Olson/Getty Images)

The downward trend for U.S. life expectancy began in the 1980s, so opioids cannot be wholly to blame for the change.

According to the study’s authors, “Two recent studies estimated that drug overdoses accounted for 15% or less of the gap in life expectancy between the United States and other high-income countries in 2013 and 2014, respectively.”

When the National Research Council examined potential factors that could be contributing to the health disadvantage in the U.S., it honed in on nine domains in which the U.S. had poorer health outcomes compared to other high-income countries. In addition to drug-related deaths, the NRC also cited adverse birth outcomes, injuries and homicides, adolescent pregnancy and sexually transmitted infections, HIV and AIDS, obesity and diabetes, heart disease, chronic lung disease and disability.

The U.S. leads 16 other high-income countries when it comes to successfully treating cancer and cardiovascular diseases and has the lowest mortality rates in these two areas. But it has higher mortality rates across the board for most other major causes of death, including diabetes, infectious diseases, pregnancy and childbirth, congenital malformations, mental and behavioral disorders, and diseases of the respiratory, nervous, genitourinary and musculoskeletal systems.

Continuing on the same trajectory of the last two decades, the U.S. wouldn’t reach the average life expectancy that other high-income countries achieved in 2016 for more than a century.

The study’s authors stress that the decrease in U.S. life expectancy cannot be pinned down to one, two or even three particular issues — it’s a multifaceted problem that is caused by factors spanning many different arenas.

The authors suggest that things like tobacco use over the past century and the recent obesity epidemic have played a role by contributing to an influx of disease, while disparities in the health care system (access to health services, insurance, etc.) have likely compounded the effects of disease.

But they also point to despair as a likely culprit as well, noting that deaths related to drugs, alcohol and suicide are often referred to as “deaths of despair.”

“Some studies suggest that psychological distress, anxiety, and depression have increased in the United States, especially among adolescents and young adults,” the authors write.

“Psychological distress and mental illness are risk factors for substance abuse and suicides, and may complicate organ system diseases, as when hopelessness erodes motivation to pursue health care or manage chronic illnesses. Chronic stress has neurobiological and systemic effects on allostatic load and end organs and may increase pain sensitivity (and thus analgesic needs),” they added.

Finally, the authors identify socioeconomic as a potential influencing factor in the increase in midlife mortality.

When the increase in midlife mortality began in the 1980s and 1990s, the United States economy was going through a massive restructuring — manufacturing jobs started disappearing, the middle class began shrinking, wages stagnated and intergenerational mobility declined (the ability for one generation of a family to achieve different social status than those before it). At the same time, the gap in income inequality grew wider until it surpassed that of other countries.

Those populations most affected by the transformed economy (such as adults with lower levels of education) experienced the largest shift in mortality rates. Regions that were hit particularly hard by the economic changes (such as regions in the Rust Belt and industrial Midwest), saw the greatest increases in mortality rates compared to more populous regions with stronger economies.

To reverse the American mortality disadvantage, they say, it is vital to understand the complicated, interwoven underlying causes of midlife mortality.