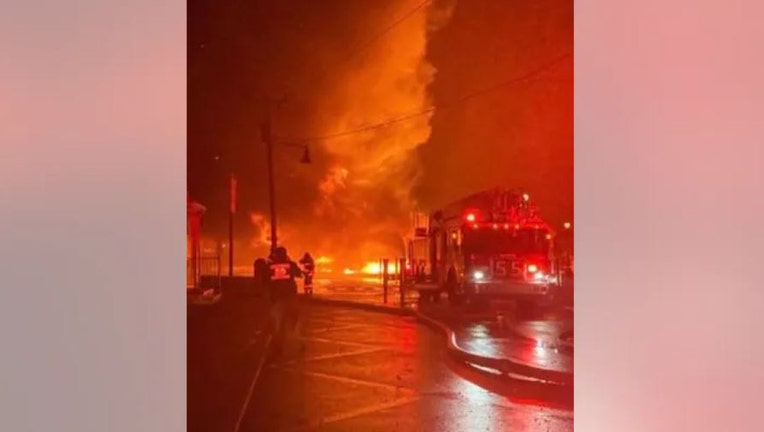 A fire engine is at the scene of a massive Old Mystic seaport blaze. (Old Mystic Fire Department)

The fire that erupted at Seaport Marine on Washington Street around 9 p.m. reportedly destroyed at least two buildings and prompted a response from several fire departments in the region.

Mystic Fire Chief Anthony Manfredi Jr. said some residents evacuated their homes amid concerns the blaze would spread to nearby homes including those on Willow Street, The Day newspaper reported.

As the hours passed, several explosions could be heard as the blaze raged on. 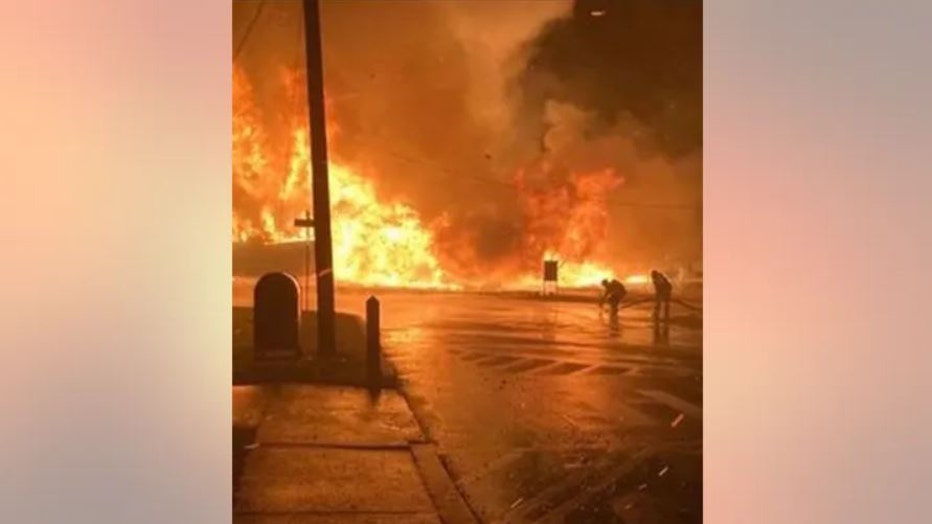 Images from the scene showed intense winds whip up a spiral of dark smoke and a massive fireball at one point on the south end of Cottrell Street. The flames stretched across the water and caused sparks on a telephone line.

Stonington Police Deputy Chief Todd Olson said the Whaler’s Inn, a boutique hotel, was also evacuated due to the amount of smoke in the air. The Day reported that crowds gathered across the Mystic River to see the fire, and a state fire marshal responded to assist with the investigation into the cause. At least one home was badly damaged.

Manfredi said no one was injured, but one firefighter was taken to a hospital for an evaluation. 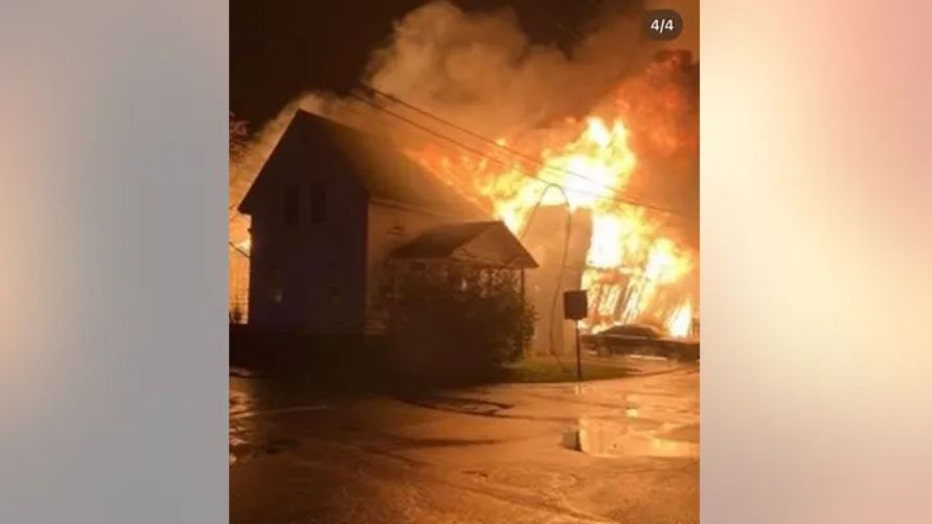 Flames engulf a nearby home after a fire ignited at the Old Mystic marina in Connecticut overnight. (Old Mystic Fire Department)

In a Facebook post, the Old Mystic Fire Department said it was requested at approximately 9 p.m. to assist at a structure fire in the Mystic Fire District. Upon arrival, two of its engines established water supplies and provided fire attack and exposure protection, the department said. 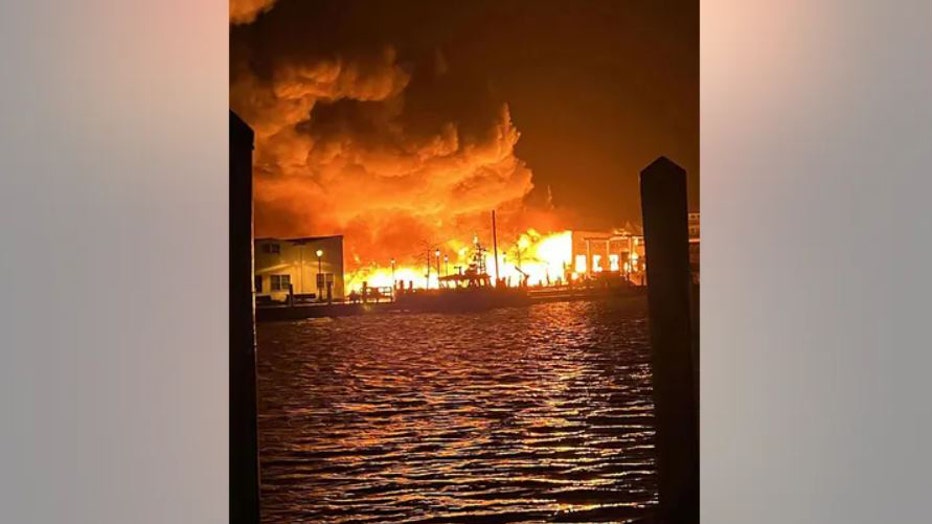 "Our Tower Ladder was also set up for elevated master stream operations. OMFD personnel and equipment were released and returned to district at approximately 2AM," the department wrote, sharing photos of the blaze. "Thank you to the East Great Plains and Voluntown Fire Departments for providing apparatus and personnel to cover our district while our units were committed at the fire." 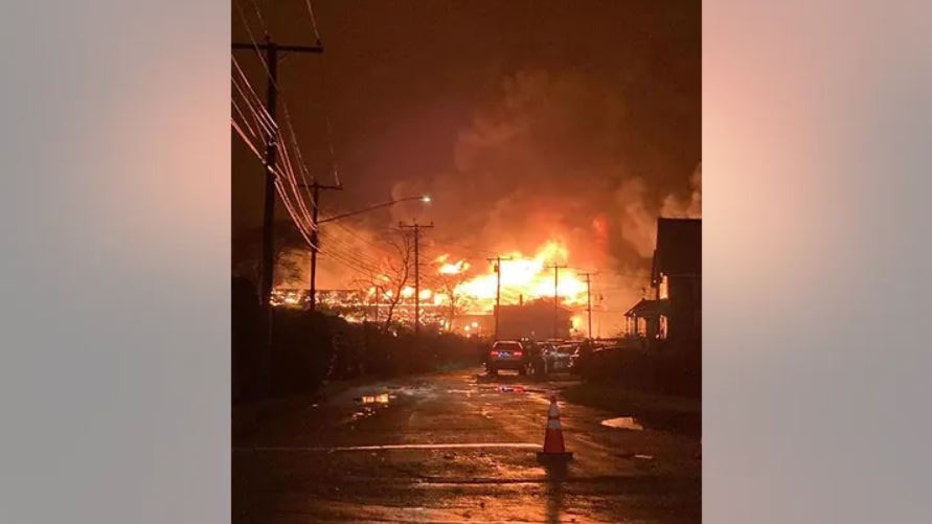 As of 3:20 a.m., the Old Mystic Fire Department said all its units had been returned to service. 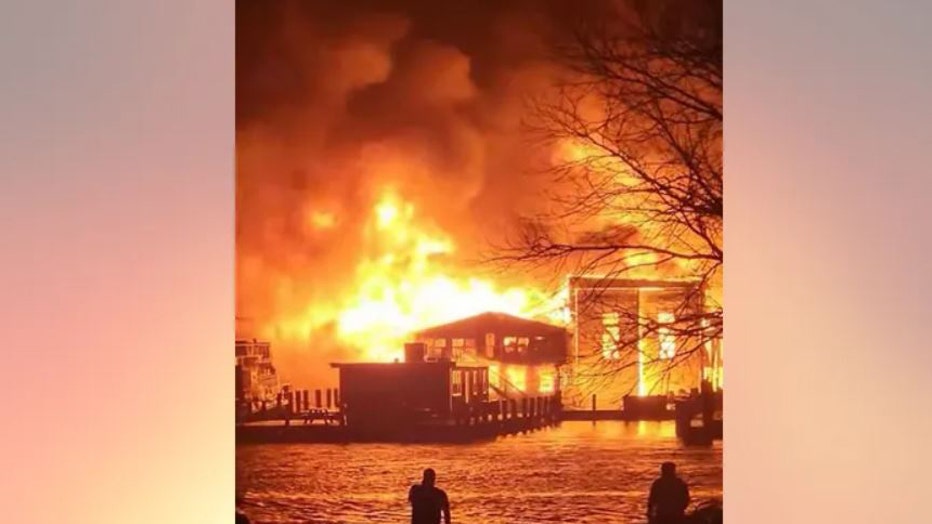 According to Norwich Firefighters Local 892, its Truck 1 and Battalion was working at the four-alarm wind driven fire on Washington Street in Mystic. The union said multiple buildings were fully involved and a few collapsed. Crews had numerous ladder pipes, deck guns, hand lines, and a fire boat in operation.