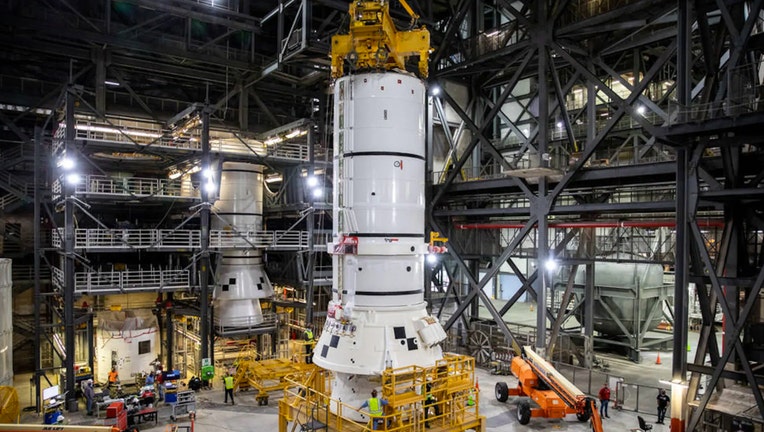 NASA has started assembling the Artemis Space Launch System, marking an important milestone ahead of future missions to the moon.

"At NASA’s Kennedy Space Center in Florida, engineers lowered the first of 10 segments into place Nov. 21 for the twin solid rocket boosters that will power the first flight of the agency’s new deep space rocket," NASA said in a statement. "Artemis I will be an uncrewed flight to test the SLS rocket and Orion spacecraft as an integrated system ahead of crewed flights to the Moon with the Artemis program."

The space agency said the booster segments arrived by train in June from Northrop Grumman’s manufacturing facility in Utah.

"Stacking operations began Nov. 19 with engineers transporting a booster segment from the Rotation, Processing and Surge Facility to the 525-foot-tall Vehicle Assembly Building," it said.

MORE NEWS: Jupiter and Saturn are about to do something not seen for nearly 800 years

The Artemis I mission is scheduled to take place in 2021.

"Stacking the first piece of the SLS rocket on the mobile launcher marks a major milestone for the Artemis Program," said Andrew Shroble, an integrated operations flow manager with civil engineering firm Jacobs. "It shows the mission is truly taking shape and will soon head to the launch pad."

NASA’s Artemis program aims to return astronauts to the moon in 2024. However, a recent report from the NASA Office of Inspector General described the 2024 timeline as overly ambitious.

Earlier this year NASA tested the booster rocket technology that will be used to power future Artemis missions to the moon.

Last year, NASA revealed details of its vision for the Artemis Moon Lander that will return astronauts to the lunar surface.

The U.S. is the only country to have placed astronauts on the moon, having last done so in December 1972 during the Apollo 17 mission. Only 12 men, all Americans, have set foot on the moon.

Fox News’ Chris Ciaccia and the Associated Press contributed to this article.