FOX NEWS - Since its launch in April 2018, NASA's Transiting Exoplanet Survey Satellite (TESS) has found a great number of exoplanets, including a so-called "missing link."

But now, the alien planet hunter has discovered its first Earth-sized planet in a star's "habitable zone," an area that could allow for liquid water to be on the surface.

Known as TOI 700 d, the planet is orbiting the star TOI 700, described as a "small, cool M dwarf star." It is 101.5 light-years from Earth in the southern constellation Dorado. One light-year is the equivalent of 6 trillion miles.

"TESS was designed and launched specifically to find Earth-sized planets orbiting nearby stars," said Paul Hertz, astrophysics division director at NASA Headquarters in a statement. "Planets around nearby stars are easiest to follow-up with larger telescopes in space and on Earth. Discovering TOI 700 d is a key science finding for TESS. Confirming the planet's size and habitable zone status with Spitzer is another win for Spitzer as it approaches the end of science operations this January." 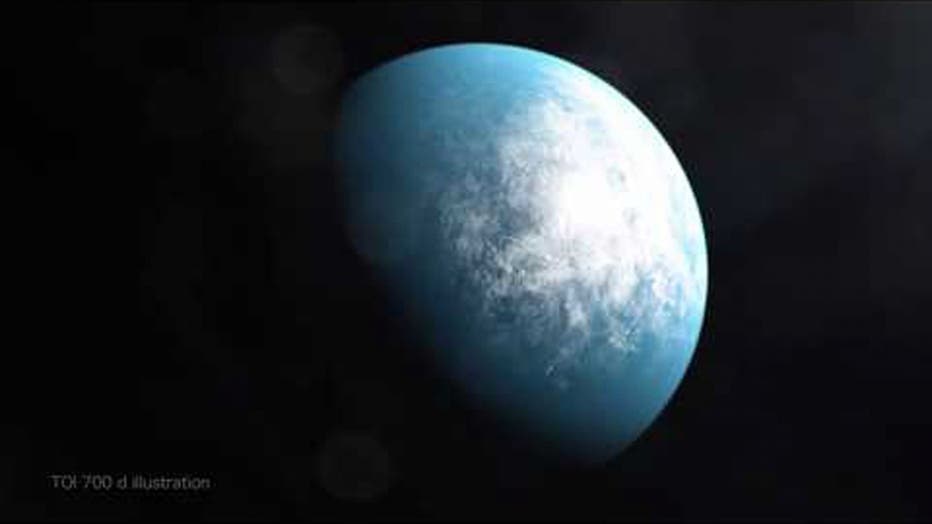 NASA's Transiting Exoplanet Survey Satellite (TESS) has discovered its first Earth-size planet in its star's habitable zone, the range of distances where conditions may be just right to allow the presence of liquid water on the surface. Scientists co (NASA's Goddard Space Flight Center)

The findings were presented at the 235th meeting of the American Astronomical Society and will soon be published in a scientific journal.

TOI 700 d, the outermost known planet in the system, is approximately 20 percent larger than Earth and orbits the star once every 37 days, NASA added in the release.

Aside from TOI 700 d, TESS discovered other planets circling TOI 700: TOI 700 b, which is "almost exactly Earth-size," is likely rocky and orbits the star every 10 days; and TOI 700 c, which is 2.6 times larger than Earth, orbits the star ever 16 days and is "likely a gas-dominated world."

Researchers used data from TESS, which monitors large sections of the sky for 27 days, to correctly identify TOI 700 after initially misclassifying it as being similar to our Sun. Instead, the M dwarf star is approximately 40 percent of the Sun's mass and size and roughly 50 percent of its surface temperature.

"When we corrected the star's parameters, the sizes of its planets dropped, and we realized the outermost one was about the size of Earth and in the habitable zone," Emily Gilbert, a graduate student at the University of Chicago, added in the statement. "Additionally, in 11 months of data we saw no flares from the star, which improves the chances TOI 700 d is habitable and makes it easier to model its atmospheric and surface conditions."

TOI 700 d has been spotted by another spacecraft, NASA's Spitzer Space Telescope, confirming its existence. 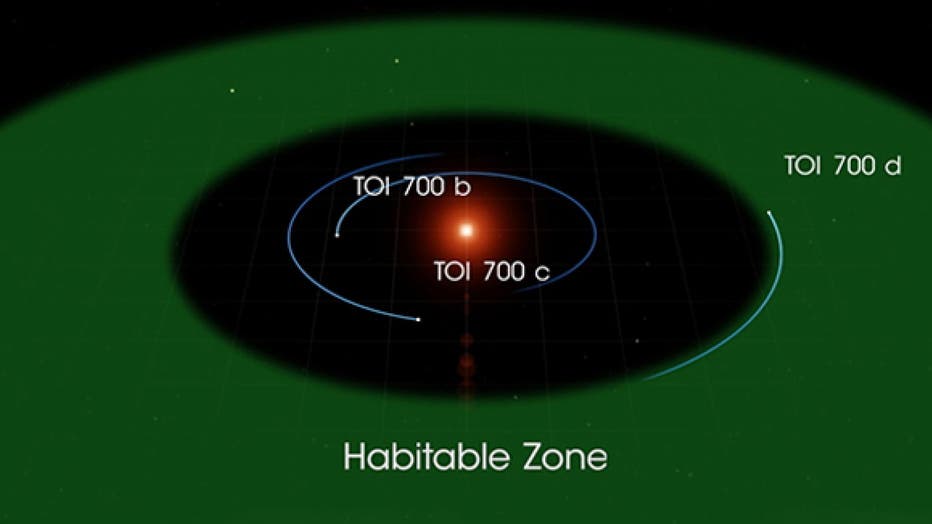 "Given the impact of this discovery--that it is TESS's first habitable-zone Earth-size planet — we really wanted our understanding of this system to be as concrete as possible," astronomer Joseph Rodriguez said in the statement.

"Spitzer saw TOI 700 d transit exactly when we expected it to," Rodriguez continued. "It's a great addition to the legacy of a mission that helped confirm two of the TRAPPIST-1 planets and identify five more."

Although TOI 700 is further away than the TRAPPIST-1 star system (40 light-years away and home to seven Earth-sized exoplanets, three which may be in the habitable zone), it can still be examined in great detail, including learning more about TOI 700 d.

"Someday, when we have real spectra from TOI 700 d, we can backtrack, match them to the closest simulated spectrum and then match that to a model," said Gabrielle Engelmann-Suissa, part of another team of researchers who did environmental modeling work on the planet, in the same statement. "It's exciting because no matter what we find out about the planet, it's going to look completely different from what we have here on Earth."

TESS, which launched in April 2018, replaced the Kepler telescope, which started to malfunction towards the latter part of 2018 last year and was eventually retired in October 2018 after discovering more than 2,600 exoplanets, including 18 Earth-sized exoplanets. In September 2018, the $200 million TESS found its first exoplanet, and in April 2019, it found its first Earth-sized planet.

More than 4,000 exoplanets have been discovered by NASA in total, approximately 50 of which were believed to potentially habitable as of September 2018. They have the right size and the right orbit of their star to support surface water and, at least theoretically, to support life.

Although TESS has discovered several exoplanets that could support life, it is unable to look for atmospheric or other signs of life. That job will be given to the James Webb Telescope, the next-generation successor to the Hubble Space Telescope, set for launch in March 2021.