NASCAR released on Thursday an image of the noose that was discovered in driver Bubba Wallace’s garage on June 21.

Representatives from the Department of Justice and the Federal Bureau of Investigation said on Tuesday that no criminal charges would be filed regarding the noose, noting that it had been in that same garage since 2019. 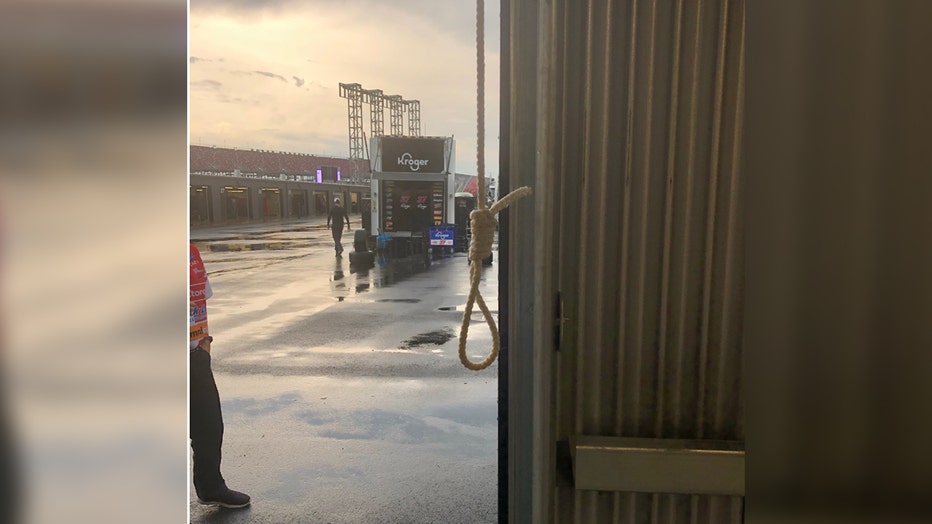 On June 25, NASCAR released an image of the noose found in Bubba Wallace's garage. (Credit: NASCAR)

Wallace, a Black driver, has been outspoken on racial issues in the wake of the civil unrest and global protests sparked by the death of George Floyd, an unarmed black man, died after Derek Chauvin, a Minneapolis police officer, knelt on his neck for nearly nine minutes.  On June 10, Wallace drove in a car with a #BlackLivesMatter paint scheme.

In an extraordinary act of solidarity with NASCAR’s only Black driver, dozens of drivers pushed the car belonging to Wallace to the front of the field before June 22’s race as FBI agents nearby tried to find out who left a noose in his garage stall over the weekend, before they eventually determined that there was no criminality involved.

The 26-year-old Wallace was surrounded by all 39 other drivers in the moments before the race and they were joined by their crews in a march down pit road as they pushed his No. 43 to the front of the line. Wallace climbed out of his car and wept.

On Wednesday, Wallace tweeted a message thanking NASCAR and the FBI for their actions.

In a media statement, the racing organization said that "after Sunday’s discovery, NASCAR officials asked each track to sweep through respective garages. Across the 1,684 garage stalls at 29 tracks, NASCAR found only 11 total had a pull-down rope tied in a knot and only one noose — the one discovered Sunday in the No. 43 garage stall."