PHOENIX - Police say this is a tough task because these groups are like tracking moving targets. Constantly changing locations to keep the police guessing -- and when officers do arrive at the scene, about the best they can do is disperse the crowd.

On Sunday night, a crazy scene was recorded on cell phone video. Dozens, maybe hundreds of cars and motorcycles crowded into a large parking lot and caused quite a commotion.

"Because we had a lot of people out on the balcony.. whoa... what's going on here?" he said.

This gathering brought a huge volume of vehicles, erratic driving, racing, blocking roads and even setting off fireworks. All the noise rattled windows and nerves.

"You can hear the cars.. we just thought, why does it sound like the freeway is awful close tonight? It must've been everybody racing here at night," said a woman at the scene. "If somebody's racing and loses control of their vehicle, that could be a tragedy."

From the ground level, it's hard to tell anything happened here near Interstate 17 and Thunderbird Road, but with a birds-eye view, you get a better look. You can see tread marks all across the parking lot, left behind by drivers doing donuts.

In the video, you can see and hear police cruisers converge on the scene, sending the crowd scurrying out of sight and away from trouble. But police admit they are playing catch up. With the car crowd always changing locations, they're hard to catch when officers arrive.

"That's a hard situation to be in because if it's one officer, you can imagine there's 250 cars in that parking lot by an officer by themselves, that's not a safe environment to be in," said Phoenix Police Sgt. Mercedes Fortune.

So far, there are no reports of accidents or injuries, making this more loud than illegal; more of a nuisance than a nightmare, but with chaotic scenes like this, there's not much sleeping going on anyway.

Police say they are working with businesses to barricade bigger parking lots like this one after hours and on weekends. They encourage people to report the problem when they see it or hear it. 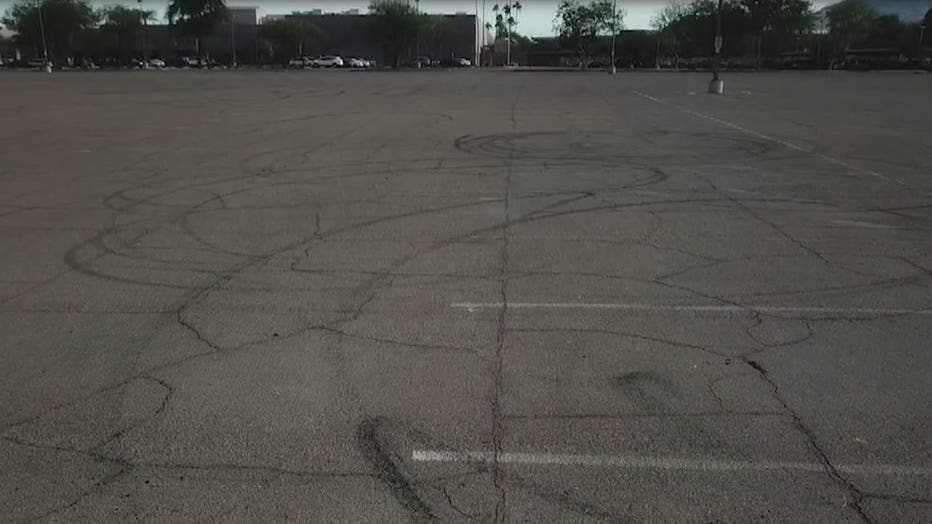