Just in time for Halloween, the Chicago History Museum is putting some of its creepiest dolls on display to help teach Chicago history.

CHICAGO - Just in time for Halloween, the Chicago History Museum is putting some of its creepiest dolls on display to help teach Chicago history.

When you say dolls, you probably think of Ken and Barbie, Raggedy Ann or maybe even Bratz. But if your tastes run more to Chucky, you'll be right at home this month at the Chicago History Museum.

"This particular doll was used in a puppet theater a while back and it's very old, very antique and very creepy looking," said museum curator Charles Bethea, pointing to a shriveled marionette in a display case.

Bethea said they have hundreds of historic dolls stashed in the museum's archives, and to celebrate Halloween, they've hand-selected 15 of the spookiest to come downstairs and meet the public in a program called "Haunted Dolls and History's Horrors."

"They're out on display, coming into cases where they don't belong," Bethea said. "And telling history tales of stories of Chicago's ghost tales, some famous ghost stories, as well as some of the tragic events that happened in Chicago history."

The dolls have been strategically hidden in 13 locations. Visitors are given a scavenger hunt program that helps tell their stories.

"This is Seeing Ghosts," Bethea said, pointing to a tiny doll with a frozen look of shock on its face. "And this particular doll represents all of the lives that were lost in the Eastland disaster."

It's because even today people report seeing ghost bodies floating in the Chicago River where the Eastland capsized.

Other dolls represent famous Chicago ghost stories like the "Woman in White" who is said to haunt the bathrooms at Lincoln Park Zoo. 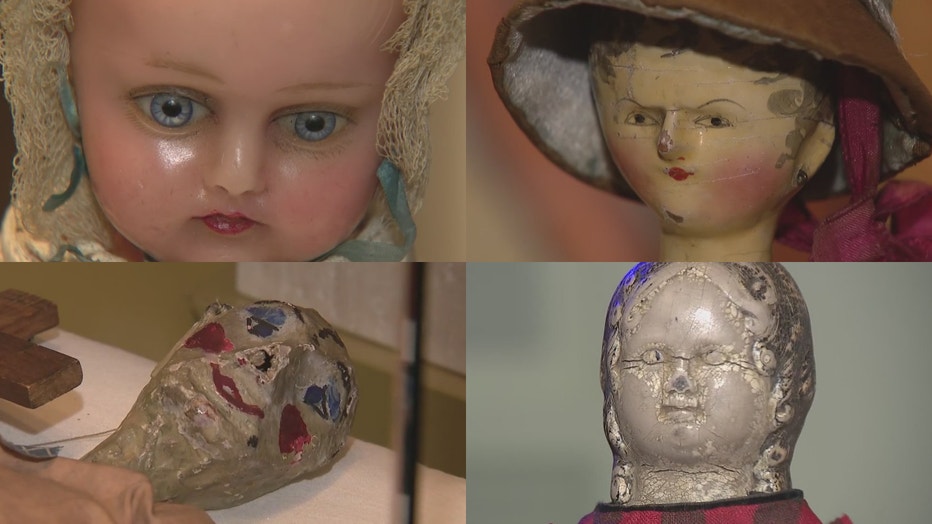 "Many people over the years have said they've seen some sort of apparition of a woman in white roaming the stalls within the bathrooms past the lions," Bethea explained. Perhaps that's because Lincoln Park used to be a graveyard before thousands of bodies were moved after the Great Chicago Fire.

"Halloween is a holiday that more and more people are starting to gravitate towards as being one of their favorite times of the year," said Bethea. "And this gives the museum an opportunity to capitalize on that in a very fun and educational way."

Haunted Dolls and History's Horrors began Tuesday and continues through November 6 at the Chicago History Museum.

And don't worry, if you have little ones, there's a kid-friendly version of the program as well.