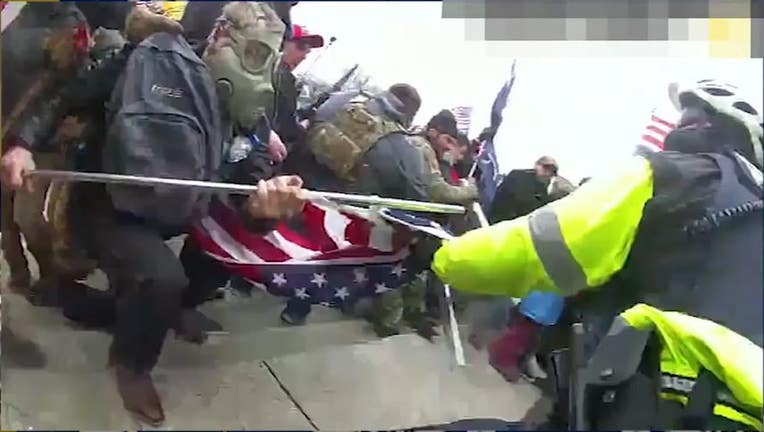 A New Jersey gym owner on Friday became the first person to plead guilty to assaulting a law enforcement officer during the Jan. 6 riot at the U.S. Capitol.

Scott Kevin Fairlamb’s deal with federal prosecutors could be a benchmark for dozens of other cases in which Capitol rioters clashed with police. Fairlamb’s attorney said prosecutors will recommend a prison sentence ranging from about 3 1/2 to 4 1/4 years, but the judge isn’t bound by that term of the plea agreement.

His plea comes less than two weeks after a group of police officers testified at a congressional hearing about their harrowing confrontations with the mob of insurrectionists. Five officers who were at the Capitol that day have died, four of them by suicide. The Justice Department has said that rioters assaulted approximately 140 police officers on Jan. 6. About 80 of them were U.S. Capitol Police officers and about 60 were from the Washington, D.C., Metropolitan Police Department.

Fairlamb, a former mixed martial arts fighter whose brother is a U.S. Secret Service agent, was one of the very first rioters to breach the Capitol after other rioters smashed windows using riot shields and kicked out a locked door, according to federal prosecutors. After leaving the building, Fairlamb harassed a line of police officers, shouting in their faces and blocking their progress through the mob, prosecutors wrote in a court filing.

A video showed him holding a collapsible baton and shouting, and shouting, "What (do) patriots do? We f——— disarm them and then we storm the f——— Capitol!"

The hordes of rioters and protesters that converged on the U.S. Capitol on Jan. 6 included the pro-Trump, far-right, anti-government Oath Keepers and Three Percenters, a loose network of anti-government militias.

U.S. District Judge Royce Lamberth set a sentencing date of Sept. 27 for Fairlamb, who has been jailed since his Jan. 22 arrest at his home in Stockholm in Sussex County, New Jersey.

Fairlamb, 44, pleaded guilty to two counts, obstruction of an official proceeding and assaulting a Metropolitan Police Department officer. The counts carry a maximum of more than 20 years in prison.

He had been indicted on 12 counts, including civil disorder, assaulting a police officer and engaging in physical violence in a restricted building or grounds.

Another video captured Fairlamb shoving and punching a police officer in the head after he left the Capitol, according to an FBI agent’s affidavit.

"As a former MMA fighter, the defendant was well aware of the injury he could have inflicted on (the officer)," prosecutors wrote. "His actions and words on that day all indicate a specific intent to obstruct a congressional proceeding through fear, intimidation, and violence, including violence against uniformed police officers."

Fairlamb’s social media accounts indicated that he subscribed to the QAnon conspiracy theory and promoted a bogus claim that former President Donald Trump would become the first president of "the new Republic" on March 4, prosecutors wrote. QAnon has centered on the baseless belief that Trump was fighting against a cabal of Satan-worshipping, child sex trafficking cannibals, including "deep state" enemies, prominent Democrats and Hollywood elites.

Devlyn Thompson, another defendant charged with assaulting an officer at the Capitol, is expected to plead guilty before the same judge on Friday after Fairlamb’s hearing. Thompson, a resident of Washington state, was charged last month with using a baton to assault a Metropolitan Police Department sergeant.

Thompson hasn’t been arrested. His defense attorneys said in a court filing that he has Asperger’s syndrome, a condition on the autism spectrum. They cited that as a reason for keeping him out of jail while awaiting sentencing.

"Counsel is currently evaluating whether (Thompson) should be examined by an expert who may opine on the impact (his) Asperger’s Syndrome may have had on the offense conduct," they wrote.

On July 27, a House panel investigating the deadly riot heard emotional testimony from four police officers who tried to defend the Capitol when the mob of Trump supporters stormed the building.

At least nine people who were at the Capitol on Jan. 6 died during or after the rioting, including Capitol Police Officer Brian Sicknick, who collapsed after he was sprayed by rioters with a chemical irritant. Four other police officers have died by suicide, including two Metropolitan Police officers who were found dead within the past month.

Police shot and killed a woman, Ashli Babbitt, who was part of a group of people trying to beat down the doors of the House chamber. Three other Trump supporters who died had suffered medical emergencies.

More than 560 people have been charged with federal crimes, and authorities are still searching for hundreds more. At least 165 defendants have been charged with assaulting, resisting or impeding officers or Capitol employees, including more than 50 people charged with using a deadly or dangerous weapon or causing serious bodily injury to an officer, the Justice Department said in July.

Fairlamb is at least the 32nd defendant to plead guilty. Most of the others have pleaded guilty to misdemeanor charges, including parading, demonstrating or picketing in a Capitol building.