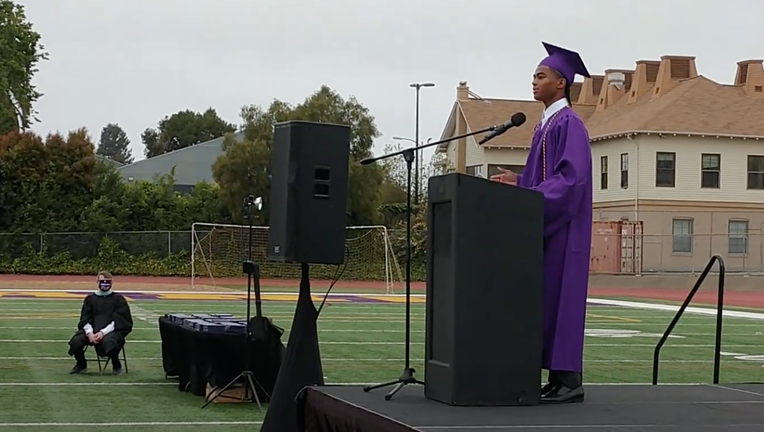 18-year-old Ahmed Muhammad delivered a speech during Oakland Technical High School's commencement ceremonies on May 29, 2021. He made history as the school’s first Black male valedictorian.

OAKLAND, Calif - Eighteen-year-old Ahmed Muhammad has inspired, led and motivated his fellow classmates at Oakland Technical High School on countless occasions over their four years together.

And on Saturday, he brought it all home with an uplifting, empowering commencement speech as he addressed the class of 2021 as his school’s first-ever Black male valedictorian.

During a ceremony that brought classmates together in-person for the first time since the pandemic shut down schools in March 2020, the Stanford University-bound teen reflected on the challenges endured by the class which saw the last two years of their time in high school dismantled by a once in a century pandemic.

With the world around them shutting down, Muhammad said that he and his classmates faced "a completely altered way of life and no template, no blueprint" to follow. He went on to describe it as a feeling of "being trapped in a glass jar, our wings banging against the glass ceilings, as we were unable to fly."

But while the pandemic challenged them in ways they could have never imagined, he reminded the class of 2021 that time and time again, it has proven its strength and fight in the face of adversity.

"It's not like we hadn't been tested before," Muhammad told his classmates, as he listed moments in history that marked their high school years.

"In 9th grade, 17 people were murdered in the Parkland, Florida school shooting," he reminded them. "Upset and horrified and fed up, we took a stand. Thousands of us led, organized and participated in the walkouts to protest gun violence. Remember being out there in front of the school?" he asked.

Muhammad also brought up the Oakland Unified School District’s teachers’ strike the following year when they were in 10th grade. "We went on strike alongside our teachers and protested for fair wages and equitable resources," he said. "We rallied, we organized, we marched." And he described how in 11th grade, the students joined thousands in San Francisco to take part in a global youth climate demonstration, as they marched "for the sustainability and longevity of our planet."

Then the summer before their senior year as the pandemic intensified, they marched for Black lives and racial justice-- for Ahmed Aubrey, Breonna Taylor, George Floyd, Rayshard Brooks and others. "Piling on top of the trauma, Black people were being gunned down by police. We marched in the streets in the middle of the pandemic because we'd had enough," the teen said, noting that they were continuing the work of those who came before them.

"That summer of 2020, even until now we made our ancestors from the civil rights movement proud. We honor the legacy of the Black Panthers who hailed from our great city, some even from this great school," the valedictorian reminded his fellow classmates, adding, "A pandemic didn't stop us."

Muhammad, who earned a 4.73-grade point average overall during his four years at Tech, has been celebrated not only as a standout student but also as a member of the Bulldog’s varsity basketball team and even as an entrepreneur and champion for equity in education through the science education company he founded, Kits Cubed.

He was officially named valedictorian of Oakland Tech earlier this year, making him the first Black male to hold that title in the school’s history, a school where Black students make up the largest racial and ethnic group at 35 percent.

It’s something that was cause for reflection and prompted a call for more action from the teen.

"As some of you may have heard, I recently became the first Black male valedictorian in our school's history," he said, prompting loud cheers and applause from the crowd of masked students. 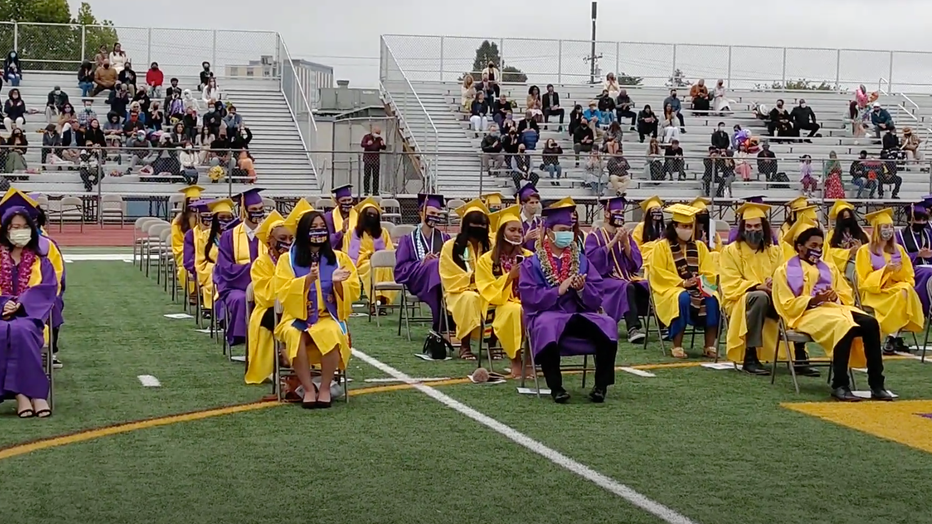 As the cheers quieted, he followed up with, "And I want to say something about that. Oakland Technical High School has been around for 106 years. And there's absolutely no way you can tell me that I'm the first Black person [male] capable of being valedictorian."

More cheers erupted, as he said, "Not even close."

"So why me?" he asked. While he said he didn’t have the answer to that question, what he did know was that the honor of being recognized with the distinction was not only his own but also belonged to those who came before him and alongside him.

"For all of those who didn't get to maximize their potential, for all of those who had the ability but lacked the opportunity, I owe it to them to appreciate this history made by the people who put me in this position," the teen said, as he challenged his classmates to do their part to lift up those who come after.

"We owe it to them to make sure that while I may be the school's first young Black man to make it as our school's valedictorian, I won't be the last," Muhammad said.

Then he looked out into the audience, noting that he wasn’t the only one in his class to leave their mark as "a first."

"Some of us here are the first in our family to graduate from high school, the first who will be going to college, the first to live in America," he said, celebrating them but also challenging them. "We all owe it to the people who didn't make it, who weren't as blessed as us to appreciate this position that we are in, and to continue turning imaginations into realities."

As he closed his speech, the valedictorian of Oakland Tech’s class of 2021 reminded his fellow Bulldogs one more time what they were made of and what they're capable of.