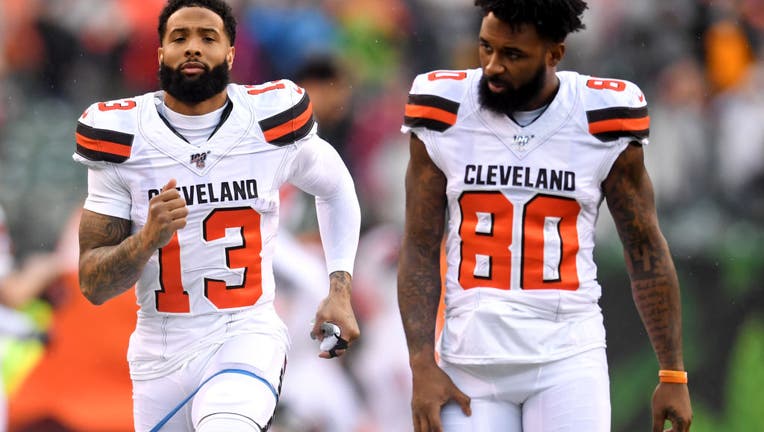 CINCINNATI, OH - DECEMBER 29, 2019: Wide receivers Jarvis Landry #80 and Odell Beckham Jr. #13 of the Cleveland Browns walk down the sideline prior to a game against the Cincinnati Bengals on December 29, 2019 at Paul Brown Stadium in Cincinnati, Ohi

LOS ANGELES - On Monday, the Los Angeles Rams and the Cincinnati Bengals hopped on the league-issued computers for a Super Bowl media day unique to the COVID-19 pandemic.

Instead of sitting podiums or taking literal center stage at a local convention center, the Rams and Bengals players hopped on Zoom calls to take in questions from the media ahead of Super Bowl LVI at SoFi Stadium. As Rams star wide receiver Odell Beckham Jr. answered questions from sports journalists across the globe, a "special guest" hopped into the virtual presser.

That mystery guest turned out to be fellow star receiver and former Cleveland Browns teammate Jarvis Landry. Landry, who played with Beckham during their LSU and Browns days, stopped by to congratulate his longtime buddy on the season he's been having with the Super Bowl-bound Rams.

"I ain't got no questions man," Landry told Beckham over the Zoom call. "You are deserving of this moment. Bro, you put countless hours to, you know, where you are today… this is a dream that you are actually turning into a reality."

"I love you. Go get that ring," Landry added, referring to the ring as the Super Bowl championship.

Beckham, moved by his friend's words of encouragement, responded by thanking Landry for inspiring him to be a better person.

"Besides pops," Beckham said, referring to his father. "There is no man who ever came into my life and has had the effect and impact that you have had to make me a better person, player, man, soon-to-be father, brother and lover."

The NFL shared a clip of the touching moment between the two longtime friends.

Beckham and the Rams take on the Bengals Sunday, February 13 at SoFi Stadium in Inglewood.