Study: Online shops try to trick you with ‘dark patterns’ that manipulate your thinking

Princeton researchers analyzed data from more than 11,000 popular shopping sites and found that about 11 percent of them were using some kind of dark pattern.

PRINCETON, N.J. - Many online shopping sites use our psychology against us by subverting user decision-making through design choices called “dark patterns,” and oftentimes, this causes shoppers to make decisions they otherwise wouldn’t.

According to a new study that analyzed data from more than 11,000 popular shopping sites, these tactics are more pervasive than most people realize.

Dark patterns coerce, steer or deceive users into making decisions that they might not if they were otherwise fully informed or given an alternative.

This includes things like using a countdown timer to pressure shoppers into “snagging a deal” even though the deal doesn’t end after the timer runs out, generating deceptive notifications in a random fashion (e.g. using a random number generator to tell shoppers how many others are “currently viewing” a product) and “confirmshaming” — when a site’s pop-up urges users to sign up and phrases the “no” option as a shameful choice, e.g., “No thanks, I like paying full price.”

It's an increasingly common choice to implement dark patterns in the design of online spaces, including social media sites, e-commerce sites, mobile apps and video games, and the research team at Princeton wanted to get a better idea of just how often dark patterns are being used and in what ways.

Out of the 11,000 websites analyzed, researchers found that about 11 percent were using some kind of dark pattern on their user interface, and a total of 183 sites were using deceptive tactics specifically.

According to data, the more popular the site, the more likely it was to be using dark patterns.

"At best, dark patterns annoy and frustrate users," the study’s authors said, "At worst, they can mislead and deceive users. This includes causing financial loss, tricking users into giving up vast amounts of personal data, or inducing compulsive and addictive behavior in adults and children."

One worry about digital shops in particular is that they have a much greater ability to manipulate shoppers’ cognitive limitations and biases.

“For example, unlike brick-and-mortar stores, digital marketplaces can capture and retain user behavior information, design and mediate user interaction, and proactively reach out to users,” the study’s authors said. “Other studies have suggested that certain elements in shopping websites can influence impulse buying behavior.”

The elements to which the authors are referring are things such as product reviews and ratings, discounts and quick add-to-cart buttons, which are all meant to impact a shopper’s decision-making.

The term "dark patterns" was coined by UX Specialist Harry Brignull in 2010, and he describes them as "tricks used in websites and apps that make you buy or sign up for things that you didn’t mean to." 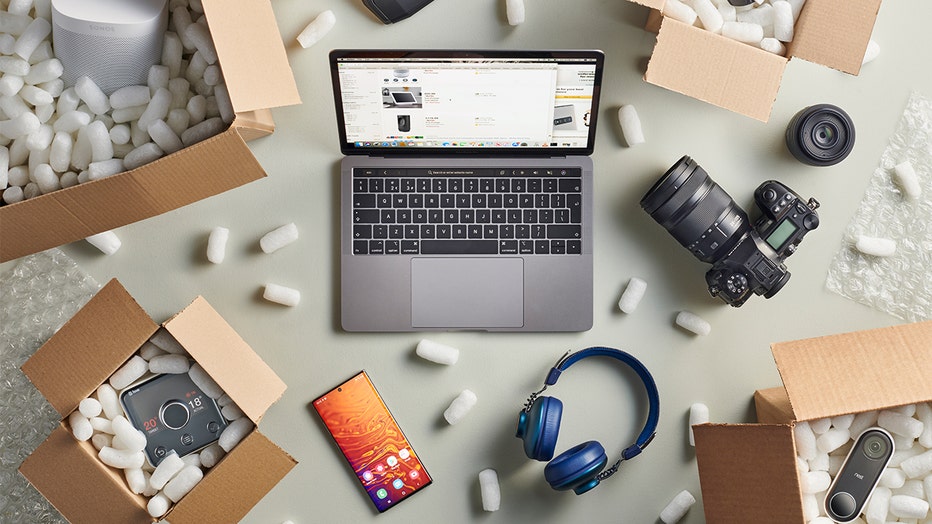 A new study from Princeton University found that many online shops use manipulative tactics, called dark patterns, to trick shoppers into buying and signing up for more. (Neil Godwin/Future Publishing via Getty Images)

While the tactic of using dark patterns has been studied before, those analyses relied on anecdotal data or data collected from user submissions. New research from a team at Princeton University provides the the first large-scale evidence documenting the prevalence of dark patterns.

Researchers developed an automated approach to collecting data about the user experience on shopping sites by creating a web crawler, which simulates a user browsing experience and identifies elements of the design interface. They then extracted all of the user interface designs and inspected the resulting clusters for instances of dark patterns. Finally, they categorized and labeled the dark patterns that they identified.

The research was focused solely on shopping websites for the study, and researchers used the web crawler to visit more than 11,000 of the most popular e-commerce sites worldwide, searching for dark patterns that trick people into signing up for recurring subscriptions or making unwanted purchases that result in financial loss.

They discovered 1,818 instances of dark patterns, which represented 15 dark pattern types across seven broad categories. These instances were found on 1,254 sites out of the more than 11,000 sites included in the data set, which equates to about 11 percent, and 183 sites were found to display deceptive messaging.

Researchers also identified 22 third-party entities that provide e-commerce sites with the ability to create and implement dark patterns on their sites.

The majority of dark patterns were found to be covert, deceptive and information-hiding in nature.

Covert dark patterns steer the user into making specific purchases without their knowledge — such as introducing a decoy to make certain other choices seem more appealing. Deceptive dark patterns induce false beliefs either through affirmative misstatements, misleading statements or omissions, such as a site offering up a discount that seems to be time-limited, when in reality it appears each time the web page is opened or refreshed.

Information-hiding dark tactics obscure or delay the presentation of necessary information to the user, such as when a site doesn’t disclose that additional charges will be added at the very end of checkout.

The study’s authors said that users are becoming increasingly more aware of these tactics, but their new data set could be used to build further countermeasures to help consumers make more informed decisions.

"One such countermeasure could be a public-facing website that scores shopping websites based on their use of dark patterns,” the authors said. “Our data set can also enable the development of browser extensions that automatically detect and flag dark patterns."

The researchers warned that their estimates are likely the lower bound of prevalence due to the limitations of their automated method, which only scraped text data from pages containing products on each site, the site’s cart and the checkout interface.

While this means that dark patterns are probably far more pervasive than the average online shopper realizes, a little awareness can cut down on a lot of subversive manipulation — and hopefully pad your pocketbook in the process.