FOX 2 - Oxford Community Schools Superintendent made his first public statement at length since Tuesday's mass shooting, expressing his sorrow for the victims, parents and community and his praise for how his staff and student body responded during the attack in a video online.

Tim Throne also spoke about teen suspect Ethan Crumbley without naming him, saying he had a meeting with high school officials the morning of the shooting, but said no disciplinary action was warranted at the time.

"I want you to know there has been a lot of talk about the student who was apprehended. That he was called up to the office, and all that kind of stuff," Throne said. "No discipline was warranted. There are no discipline records at the high school.

"Yes, this student did have contact with our front office. And yes his parents were on campus Nov. 30. I will take any and all questions at a later time and that is not now."

Four students lost their lives in the attack - Madisyn Baldwin, 17, Hana St. Juliana 14, Tate Myre 16, and Justin Shilling, 17, while seven other people including one teacher, was wounded.

Throne said that it would likely be weeks before the school is reopened, adding that it looks like a "war zone." Part of that he said was due to the "game plan" that the staff and students had prepped for in evacuating quickly and safely.

"Because they pulled this game plan out so well, this high school is a wreck right now," he said. "And that's okay because they did exactly as they were told, trained and executed the game plan perfectly. I am not sure how long, but it will be weeks probably before this building is ready."

Throne added that he spoke to Gov. Gretchen Whitmer earlier today and that she has assured him help in making sure the school district receives the supplies needed for repairs.

Throne said that the tragedy will not define the school and community. 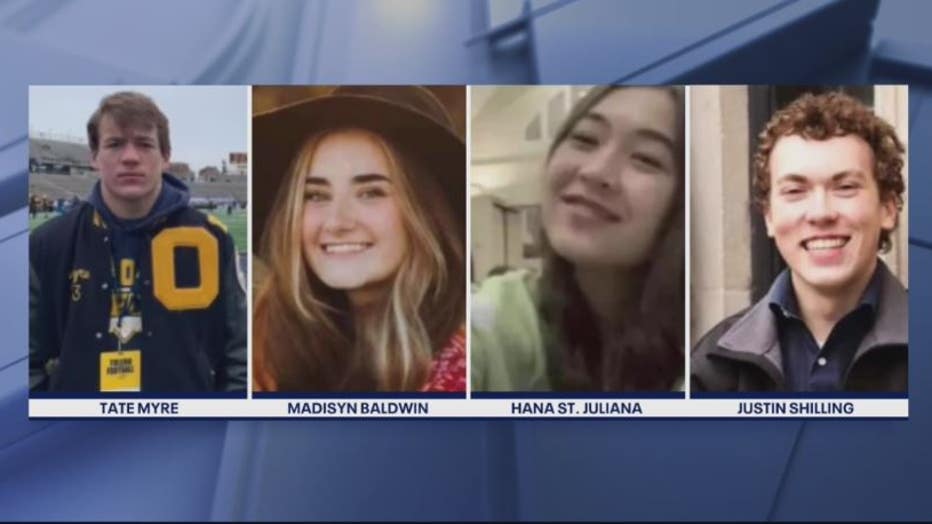 The four shooting victims at Oxford High School who lost their lives in the attack.