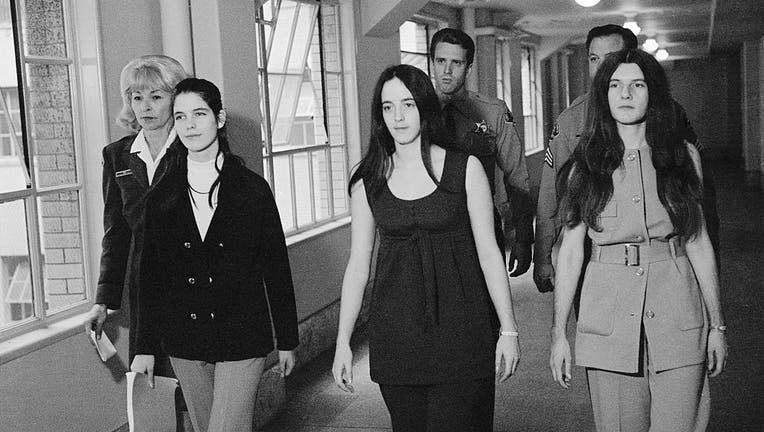 The three female defendants in the Tate-LaBianca murders, (L-R) Leslie Van Houten, Susan Atkins, and Patricia Krenwinkel, return to their cells in a file image taken in 1970. (Credit: Getty Images)

SAN FRANCISCO - For the first time, a California parole panel on Thursday recommended the release of Patricia Krenwinkel more than five decades after she and other followers of cult leader Charles Manson terrorized the state.

Krenwinkel, 74, was convicted in the slayings of pregnant actor Sharon Tate and four other people in 1969. She helped kill grocer Leno LaBianca and his wife Rosemary the next night in what prosecutors say was an attempt by Manson to start a race war. Krenwinkel wrote "Helter Skelter" on a wall using the blood of one of their victims.

She was previously denied parole 14 times.

The new parole recommendation will be reviewed by the state parole board's legal division before likely going to Gov. Gavin Newsom for a decision within five months. He has previously rejected parole recommendations for other followers of Manson, who died in prison in 2017.

New laws since Krenwinkel was last denied parole in 2017 required the parole panel to consider that she committed the murders at a young age and is now an elderly prisoner.

Also, for the first time, Los Angeles County prosecutors weren’t at the parole hearing to object, under District Attorney George Gascón’s policy that prosecutors should not be involved in deciding whether prisoners are ready for release.

However, Krenwinkel’s attorney, Keith Wattley, said relatives of her victims offered the same objections at the hearing as prosecutors have in the past.

What was different this time was that the parole panel was willing to follow the law, he said, recognizing that she has had no disciplinary violations and is no longer a danger to society.

"She's completely transformed from the person she was when she committed this crime, which is all that it's supposed to take to be granted parole," he said.

"I’m hopeful that the governor recognizes that he shouldn’t be playing political games with people’s lives," Wattley said. "The governor would be blocking her parole not because he’s afraid of her, but because he doesn’t like her. And the law doesn’t allow that." 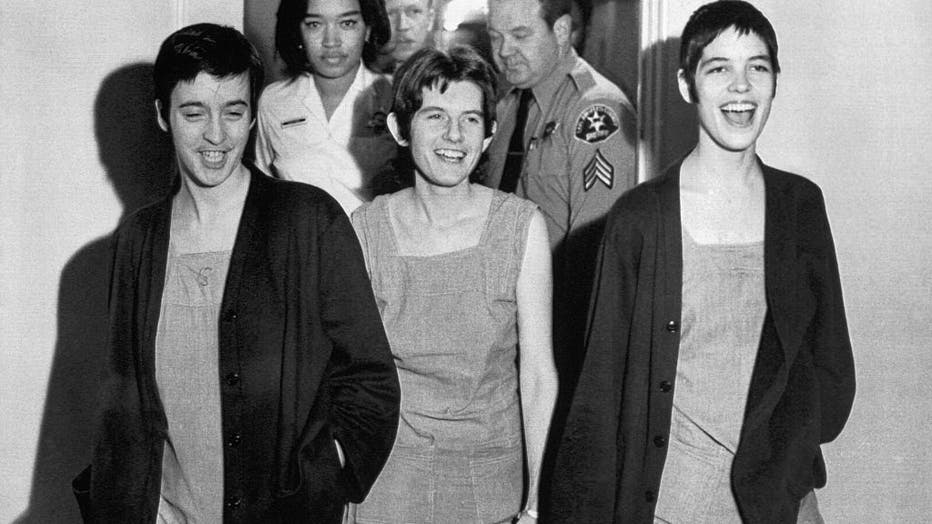 Susan Denise Atkins, (left), Patricia Krenwinkel and Leslie Van Houten (right), laugh after receiving the death sentence for their part in the Tate-LaBianca killing at the order of Charles Manson. (Credit: Getty Images)

Krenwinkel remains incarcerated at the California Institution for Women east of Los Angeles, where she first arrived in 1971. She became the state’s longest-serving female inmate when fellow Manson follower Susan Atkins died of cancer in prison in 2009.

Krenwinkel’s attorney said he understands she is also the longest-serving woman in the United States.

Charles Manson, a small-time career criminal who had reinvented himself as a hippie guru, dispatched a band of disaffected young followers on a deadly weekend rampage that would terrorize Los Angeles.

On that first night, Aug. 8, 1969, Manson sent a handful of his young, mostly female followers to the palatial hilltop estate of actress Sharon Tate with orders to kill everyone there. The 26-year-old actress and four friends were bludgeoned, shot and stabbed scores of times. Their blood was used to scrawl the words "Pigs" and "Helter Skelter" on the walls.

Tate, the wife of director Roman Polanski, was 8½ months pregnant, and her killers later testified that she pleaded in her last moments for her unborn baby’s life. Others killed were coffee heiress Abigail Folger, celebrity hairstylist Jay Sebring and Wojciech Frykowski, an aspiring screenwriter and friend of Polanski, who was out of town.

On the way into the estate, the attackers crossed paths with 19-year-old Steven Parent, who was leaving after visiting an acquaintance who lived in the guesthouse. Parent was shot to death.

The next night, Manson himself led a handful of followers to the home of wealthy grocer LaBianca and his wife, Rosemary, tying up the couple and leaving the others to butcher them with knives.

Authorities would say later that it was part of a plot Manson hatched to persuade gullible young followers to launch a race war that only he could hide them from. He’d gotten the premonition, they said, from a twisted interpretation of the Beatles song "Helter Skelter."

Manson died in 2017 of natural causes at a California hospital while serving a life sentence.

Krenwinkel was a 19-year-old secretary living with her older sister when she met Manson, then age 33, at a party. She testified in 2016 that she soon left everything behind to follow him because she thought they might have a romantic relationship.

But Krenwinkel said Manson abused her physically and emotionally and trafficked her to other men for sex. She said she fled twice only to be brought back and that she was rarely left alone and usually was under the influence of drugs.

At her last parole hearing, Krenwinkel told how she repeatedly stabbed Abigail Folger, 26, heiress to a coffee fortune, at Tate’s home on Aug. 9, 1969.

The next night, she said Manson and his right-hand man, Charles "Tex" Watson, told her to "do something witchy," so she stabbed La Bianca in the stomach with a fork, then took a rag and wrote "Helter Skelter," ″Rise" and "Death to Pigs" on the walls with his blood.

She and other participants were initially sentenced to death. But they were resentenced to life with the possibility of parole after the death penalty in California was briefly ruled unconstitutional in 1972.