Speaker of the House Nancy Pelosi and Senate Majority Leader Mitch McConnell both received a first dose of the Pfizer-BioNTech COVID-19 vaccine Friday morning, shortly after Vice President Mike Pence, his wife Karen, and Surgeon General Jerome Adams were vaccinated on camera from the White House.

"Today, with confidence in science & at the direction of the Office of the Attending Physician, I received the COVID-19 vaccine. As the vaccine is being distributed, we must all continue mask wearing, social distancing & other science-based steps to save lives & crush the virus," Pelosi said in a tweet.

Pelosi continued to encourage mask-wearing and social distancing as the first batch of Pfizer’s vaccine is distributed throughout the country.

She received the vaccine at noon on Friday in Dr. Brian P. Monahan's office, the Capitol's top doctor, according to spokesman Drew Hammill. Pelosi had said Thursday evening that she was planning to receive the shot soon, and that "all Americans should have full confidence in the vaccines."

The speaker said in October that she does not like getting shots and even had a hard time getting her ears pierced.

"They have to talk me into the flu shot under great duress each year," she said. "But if it serves as a model to other people, yes, I would take the vaccine if it is approved by regular order." 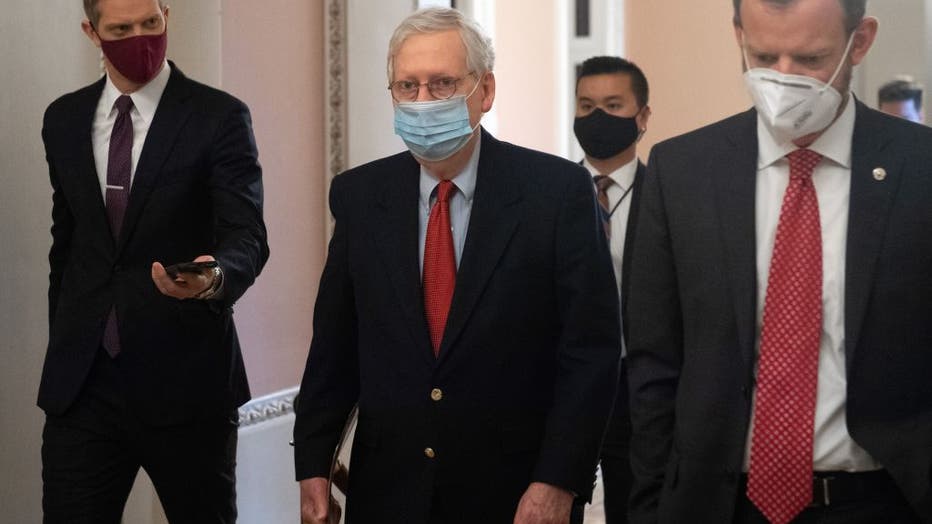 US Senate Majority Leader Mitch McConnell, Republican of Kentucky, walks to the Senate Floor at the US Capitol in Washington, DC on December 18, 2020.

McConnell received his shortly after Pelosi, touting the vaccine’s safety and effectiveness in a tweet.

"Just received the safe, effective COVID vaccine following continuity-of-government protocols. Vaccines are how we beat this virus. Now back to continue fighting for a rescue package including a lot more money for distribution so more Americans can receive it as fast as possible," the majority leader posted.

Pelosi and McConnell join a number of notable public figures who are among the first to receive Pfizer’s historic vaccine.

Pence received his shot on Friday in a live-television event aimed at reassuring Americans the vaccine is safe. He celebrated the milestone as "a medical miracle" that could eventually contain the raging pandemic.

It remains unclear when and if President Donald Trump, who has remained largely out of sight five days into the largest vaccination campaign in the nation’s history, will receive the vaccine.

President-elect Joe Biden and his wife, Jill, were set to receive the vaccine on Monday, according to Biden’s transition team. Vice President-elect Kamala Harris and her husband, Doug Emhoff, are likely to get the vaccine the following week.

Pence, meanwhile, has taken an increasingly visible role in highlighting the safety and efficacy of the shots, including touring a vaccine production facility this week.

It is unclear whether all 535 members of the House and Senate will choose to get the vaccine. The effort comes as top U.S. health officials are trying to convince regular Americans who may be skeptical of the shots to get them and allow the country to rebound from the pandemic.

The U.S. stood on the verge of adding a second COVID-19 vaccine to its arsenal Friday as the outbreak descended deeper into its most lethal phase yet, with the nation regularly recording over 3,000 deaths per day.

The Food and Drug Administration was evaluating a shot developed by Moderna Inc. and the National Institutes of Health and was expected to give it the green light soon, clearing the way for its use to begin as early as Monday.

Both Moderna’s and Pfizer-BioNTech’s shots are so-called mRNA vaccines, made with a groundbreaking new technology. They use a piece of genetic code that trains the immune system to recognize the spike protein on the surface of the virus, ready to attack if the real thing comes along.

The novel coronavirus is responsible for more than 310,000 U.S. deaths and has killed 1.6 million people worldwide. New cases in the U.S. are running at over 216,000 per day on average. Deaths per day have hit all-time highs, eclipsing 3,600 on Wednesday.