LAUSANNE, Switzerland - The International Olympic Committee said it held a second video call with Peng Shuai but again didn't release any video or transcript nor make any reference to the tennis player's sexual assault allegation against a former Chinese government official.

The Grand Slam doubles champion and three-time Olympian dropped out of public view after making her accusation, prompting the women’s professional tennis tour to suspend its tournaments in China.

As Beijing finishes preparations to host the Winter Olympics beginning Feb. 4, the IOC revealed Thursday it held a second video call with Peng following IOC President Thomas Bach’s recent statement that he spoke with her on a 30-minute video call and that she appeared to be "doing fine."

"This was reconfirmed in yesterday’s call," the IOC said Thursday. "Our human and person-centered approach means that we continue to be concerned about her personal situation and will continue to support her."

Once again, the IOC did not release video or a transcript of the exchange, nor explain how the call was arranged. 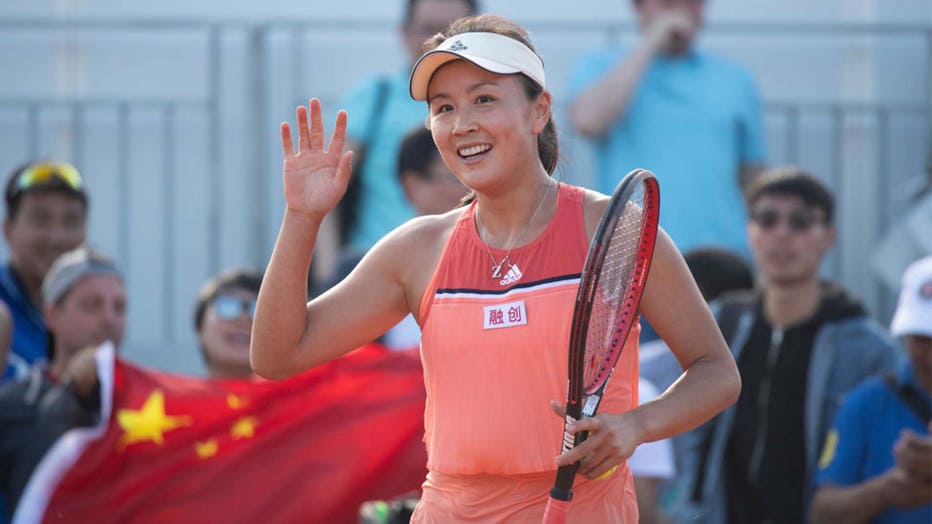 FILE - Peng Shuai of China celebrates victory during the ladies singles first round match against Aleksandra Krunic of Serbia during day three of the 2018 French Open at Roland Garros on May 29, 2018 in Paris, France. (XIN LI/Getty Images)

The IOC repeated its policy of "quiet diplomacy" dealing directly with sports officials "which, given the circumstances and based on the experience of governments and other organizations, is indicated to be the most promising way to proceed effectively in such humanitarian matters."

The IOC said it would "stay in regular touch with her, and have already agreed on a personal meeting in January," shortly before the lucrative Beijing Games begin.

The 35-year-old Peng fell out of public view after raising the allegations about former vice premier Zhang Gaoli in a Nov. 2 social media post that was quickly taken down by Chinese authorities.

Peng is a former No. 1-ranked doubles player and owner of titles at Wimbledon and the French Open.

The International Tennis Federation, the sport’s governing body, said Thursday that Peng’s allegations "must be addressed."

"Our primary concern remains Peng Shuai’s well-being," the ITF said in a statement. "We will continue to support all efforts being made to that end, both publicly and behind the scenes."

Andrea Gaudenzi, chairman of the men’s professional tennis tour, said the situation raises "serious concerns within and beyond our sport" and that the response "has so far fallen short."

"We again urge for a line of open direct communication between the player and the WTA in order to establish a clearer picture of her situation," Gaudenzi said. "We know that sport can have a positive influence on society and generally believe that having a global presence gives us the best chance of creating opportunity and making an impact.