PHOENIX - Two Phoenix City Councilmembers have issued an apology on Monday, after a video surfaced of the two seemingly poking fun at another councilmember who is known to be vocal about Phoenix Police officer-involved shootings.

FOX 10 reported on the incident on Sunday. The holiday-themed video was posted on the City of Phoenix's YouTube page on December 20, 2019. The video features District 7 Councilman Michael Nowakowski and District 5 Councilwoman Betty Guardado looking for Christmas gifts to buy for their colleagues. For Councilmember Carlos Garcia, they got him a shirt saying "I love Phoenix PD."

The controversial part of the video begins at approximately 6:17.

"Hey, how about Carlos Garcia?" Nowakowski said, in the video.

"Well you know, you know he loves police," Guardado responded.

At around the 6:49 mark, the video shows a blue-colored t-shirt with the words "I Love Phoenix P.D." surrounding a heart symbol, and "#PorVida" below the words "Phoenix PD". 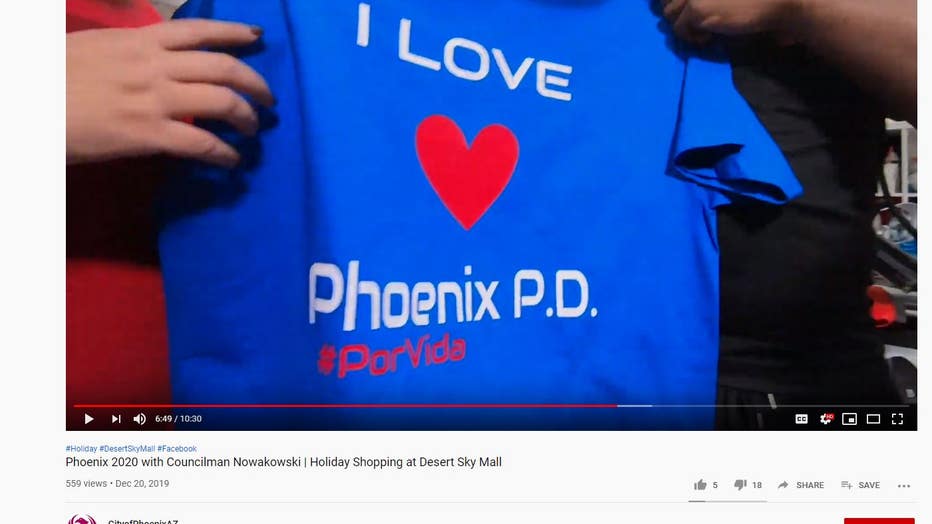 Screengrab of the T-Shirt taken from the video, which was posted on the City of Phoenix's YouTube page.

Garcia once wore a shirt that says "End Police Brutality" at a city council meeting, and in June 2019, he voted no on a contract to replenish ammunition and less-than-lethal weapons for the department.

"After last week, there was no way I would have voted for anything to continue to support the police until we fix the issues we have," Garcia said during the vote.

On Monday afternoon, Councilmembers Guardado and Nowakowski issued a joint statement, which reads:

"We would like to issue an apology to the communities we serve. Our attempt to be lighthearted regarding our friend and colleague was not well thought out. We meant no disrespect to those we are working with to improve accountability and transparency, nor to the men and women of the Phoenix Police Department. We will continue to work alongside Councilmember Garcia, our colleagues, and our residents to move Phoenix forward."

Councilman Garcia also issued a statement in response to the two's statement.

"The District 8 team continues to be committed to ensuring the Phoenix Police Department is accountable and transparent to the people of Phoenix. I hold no ill feelings towards Vice Mayor Guardado and Councilman Nowakowski for the video. My hope is that we can continue to work together and accomplish a Civilian Review Board along with other reform measures that prioritize the safety of all Phoenix residents. The community’s response to this video shows the urgency to make sure we get something done.”

This is not the first time Councilmember Nowakowski has been under fire for controversial comments. in 2016, a video was posted to YouTube where Nowakowski talked about objecting to same-sex marriage and the restrooms transgender people use.

According to a FOX 10 report at the time, the video was recorded as Nowakowski spoke to a group of Christian pastors regarding the issue of public prayer at council meetings, and included comments such as "I never thought I'd see the day that men and men would be married," and "This world is changing. It's time for us to take the leadership and change it back to the way it should be."

Nowakowski's comments at the time were condemned by other councilmembers, including Greg Stanton, who is now a Congressman, Laura Pastor, and Maricopa County Supervisor Steve Gallardo. Officials with groups focused on LGBT issues also issued criticized Nowakowski.

In the aftermath of the controversy, Nowakowski said he regrets his comments, but refused to resign. Nowakowski also attended the 2016 Phoenix Pride Parade, which resulted in further controversy, with Gallardo, who is openly gay, criticizing Nowakowski's decision to take part in the event.