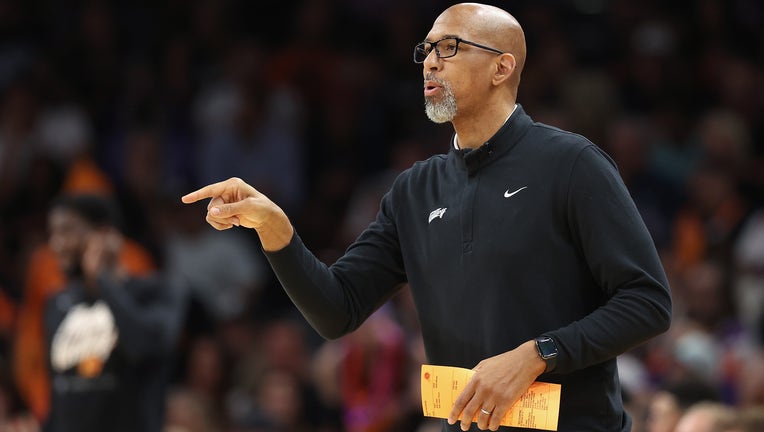 Head coach Monty Williams of the Phoenix Suns reacts during the first half of Game Two of the Western Conference Second Round NBA Playoffs at Footprint Center on May 04, 2022 in Phoenix, Arizona. (Photo by Christian Petersen/Getty Images)

PHOENIX - Monty Williams now has the honor that his Phoenix Suns players have been clamoring that he receive for two years: NBA’s Coach of the Year.

Good luck getting him to take credit.

"I’ve often said about my life that God knocks the ball out of the park and I get to run the bases," Williams said. "Yeah, my name goes on the plaque, but my name represents a lot of names."

The 50-year-old Williams won the award on May 9 after leading the Suns to a franchise-record 64 wins during the regular season. They were NBA’s best team by far, finishing with eight more wins than any other team.

The runner-up to New York’s Tom Thibodeau last season, Williams was the runaway winner this time. He received 81 of 100 first-place votes from a global panel of 100 sportswriters and broadcasters, finishing with 458 points.

Williams is known for his calming presence on the sideline and tight relationships with players. He was brought to Phoenix in 2019 to rebuild a franchise that had been among the worst in the NBA over the previous decade and quickly delivered, especially once 12-time All-Star point guard Chris Paul signed with the Suns in 2020.

Williams said bonding with his players and their families has been rewarding.

"It’s probably more important than everything that we do, from the X’s and O’s to the drills, to even playing games," Williams said. "I’ve probably lost out on jobs because people thought I was more interested in the relationship piece than the competition piece. I think they both go hand in hand."

Paul and fellow All-Star guard Devin Booker both posted on social media earlier Monday that Williams had won the award, even though no official announcement has been made.

Paul added: "WD WS…Congrats Coach Mont on Coach of the Year!!" The WD WS reference is a motto for the Suns, which means well done is better than well said.

Phoenix won a franchise-record 18 consecutive games from Oct. 30 to Dec. 2, including a 16-0 record in November. That was tied for the second-most wins in a month without a loss in NBA history, trailing Atlanta’s 17-0 record in January 2015.

Williams led the Suns to the NBA Finals last season, where they lost to the Milwaukee Bucks in six games. They are currently tied 2-2 with the Dallas Mavericks in the Western Conference semifinals.

This is Williams’ second head coaching job in the NBA. He led the New Orleans Pelicans for five seasons from 2010 to 2015, making the playoffs twice, but was fired after being swept in the first round of the playoffs in 2015.

Paul played for Williams during part of his tenure in New Orleans. The two reunited in the desert and have had considerable success.

Both are still searching for a title, but have learned to enjoy the smaller victories along the way.

"We all want to win a championship, and yet there are some things we do along the way that you can try to enjoy to the best of your ability," Williams said. "But you’re still focused on how you get there. It’s these opposing deals at times. You want to enjoy it, but you’re pounding the rock."