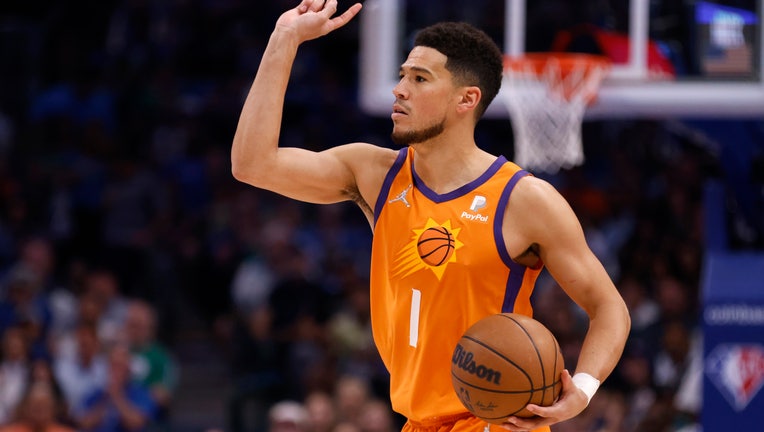 DALLAS, TX - MAY 8: Devin Booker #1 of the Phoenix Suns calls a play against the Dallas Mavericks during the first half of Game Four of the 2022 NBA Playoffs Western Conference Semifinals at American Airlines Center on May 8, 2022 in Dallas, Texas. N

DALLAS (AP) — Luka Doncic tumbled toward the baseline after getting bumped by Chris Paul just before the halftime buzzer, the apprentice showing he has watched one of the masters at drawing fouls.

The trick spurred a critical fourth foul on Paul, setting up the Dallas Mavericks to get even in the Western Conference semifinals.

Doncic scored 26 points while helping Dallas take advantage of foul trouble for Paul to beat the Phoenix Suns 111-101 on Sunday for a 2-2 series tie.

Paul ended up being out of Game 4 early in the fourth quarter, the period when he often dominated the Mavericks during an 11-game winning streak that ended with consecutive home victories for Dallas. Game 5 is Tuesday night in Phoenix.

Dorian Finney-Smith scored a playoff career-high 24 points on the most 3-pointers he’s had, regular season or playoffs. He was 8 of 12 from deep, including consecutive 3s for a 14-point lead midway through the fourth.

Dallas matched its 20 3s (20 of 44) from a Mother’s Day rout of the Los Angeles Lakers in 2011, a win that completed a four-game sweep in the second round on the way to the championship. The Mavericks are playing beyond the first round for the first time since then.

Devin Booker scored 35 points for the Suns, who dropped two straight on the road with a 2-0 lead just as they did in last year’s NBA Finals. Milwaukee won the last four to take the title. Top-seeded Phoenix lost consecutive games for the first time in the playoffs.

"Last year was a learning experience for us," Booker said. "We went to six games last year with the Lakers, six games with the Clippers, six with the Bucks, six with New Orleans (this year). We understand that it’s a series. It’s the playoffs for a reason."

Turnovers were the story with Paul in Dallas’ Game 3 win, when the 37-year-old had the most in any half of his playoff career with seven before halftime.

This time it was fouls, and it started when coach Monty Williams put him back in the game with three in the final minute of the first half. Williams had taken Paul out after his third at the 1:52 mark.

Paul drove to try to score in the final seconds but left the shot short, then made the ill-fated decision to chase the rebound.

"I’ve got to look back at it," Paul said. "I mean, I can’t put myself in the situation to give them that ability to do that. I’ve just got to look at myself and figure out how to do better."

Just 2 1/2 minutes into the second half, Williams had no choice but to use his challenge when Paul stopped and backed into Jalen Brunson as Paul started bringing the ball up the court. The fifth foul was upheld on review.

The sixth also came against Brunson just a minute and a half after Paul had returned in the fourth. Paul finished with five points.

"Everybody’s got to take ownership, and it starts with me," Williams said. "I made some decisions tonight that put us in a tough spot. Should have kept Chris out of the game, especially right before halftime. And then as a team, we’ve got take ownership as far as guarding the ball so we don’t have to help as much."

Booker kept the Suns close into the fourth quarter despite long stretches without his backcourt mate, but Doncic eventually wore them down with post-ups and other drives for buckets or assists.

With the Suns down six midway through the fourth quarter, Doncic backed down the defense for a short bank shot, followed by Finney’s back-to-back 3s.

Then the lead was back down to eight when Doncic drove twice and kicked out to the 3-point line both times. Reggie Bullock hit the first and Brunson the second for a 105-95 lead with 2:52 remaining. Eight of Doncic’s 11 assists were on 3s.

It was unclear what Paul was addressing after the game when he tweeted about a player’s family being accosted by fans in Dallas. He wasn’t asked about it by reporters after the game. "Wanna fine players for saying stuff to the fans but the fans can put they hands on our families," Paul wrote before adding an expletive.

Suns: Crowder kept Phoenix afloat early when the Mavericks were shooting better than 60% from 3, hitting a couple from deep. He finished with 15. Deandre Ayton had 14 points and 11 rebounds.

Mavericks: Finney-Smith’s five 3s in the first half were his most in any half in his career, regular season or playoffs. ... Brunson scored 18 points. Davis Bertans started 4 of 4 from 3 and finished with 12 points.