WINTER HAVEN, Fla. - A visibly frustrated sheriff announced the arrest of seven people – three of which were illegal immigrants – after 5 kilos of heroin and 130 pounds of meth were seized.

One of the illegal immigrants has since been released from a jail in California, according to Polk County Sheriff Grady Judd. The arrests came from three separate investigations involving the agency’s undercover detectives, the sheriff explained Monday morning.

The first investigation occurred after detectives came in contact with Albaro Armando Carillo Jr. and Jose Juan Tafolla-Navarrete in California. Both are illegal immigrants, Judd said. In April, the undercover agents received 7 pounds of meth from the two suspects. In May, they flew out to Los Angeles and purchased 22 pounds of meth from them. In July, they received another 10 pounds.

On August 1, with the help of California agents, the undercover agents arrested the duo.

“Meth and heroin flow freely into this country because we don’t keep out illegal aliens involved in trafficking and drugs,” Judd said. “Both of them or illegal. Did you hear me? They are illegal. They are in this country in violation of the law.”

He said detectives checked on their jail status Monday morning, and were upset to learn Tafolla-Navarrete bonded out of jail without an ICE hold. Carillo remains in jail. He doesn’t have an ICE hold either.

“Can you believe that? Not released and deported. Released,” Judd said, adding that his department plans to report Carillo to ICE from Polk County. 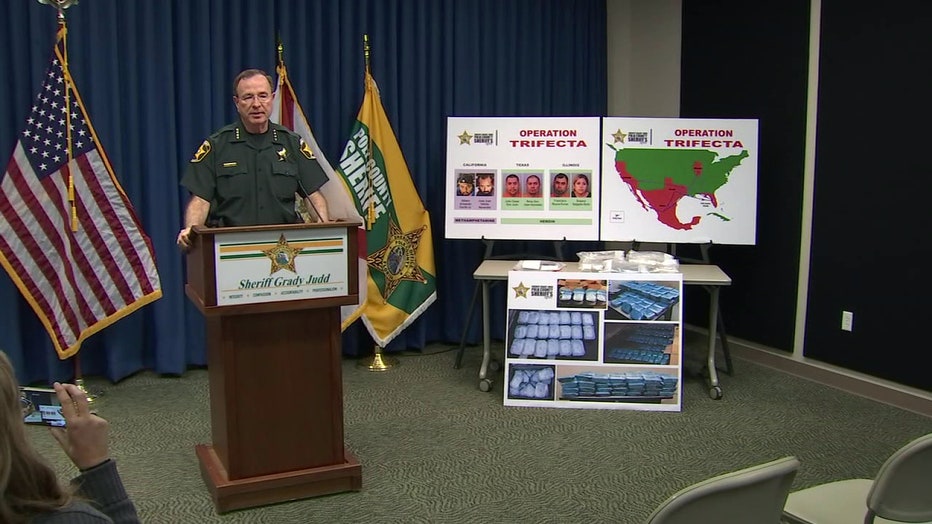 Along the way, undercover agents learned about two separate operations in Chicago, Illinois and Houston, Texas that was selling heroin.

On November 7, Judd said Julio Cesar Don Juan drove from Houston to Polk County to deliver 1 kilo of heroin to the undercover detectives.

On Thanksgiving Day, he, along with his brother, Rene Don Juan-Gonzalez, brought the agents another 1.25 kilos of heroin. They were arrested at a Walmart in Lakeland.

But, Judd said, it wasn’t the only arrest they made on Thanksgiving Day.

Susana Salgado-Solis drove from Chicago with her children, ages 5 and 6, to deliver 3.25 kilos of heroin. A second suspect, Francisco Reyna-Duran, who is an illegal immigrant, flew down from Chicago to Polk County in advance to set up the swap between them and the detectives, the sheriff explained.

Judd said Salgado-Solis left her children alone in a motel. He said when detectives located the children, they were with a Hispanic male, who was arrested for a false 911 report.

Judd said they haven’t been able to directly connect the male to the heroin case.  The Department of Children and Families took custody of the children, and Salgado-Solis refuses to talk to detectives. 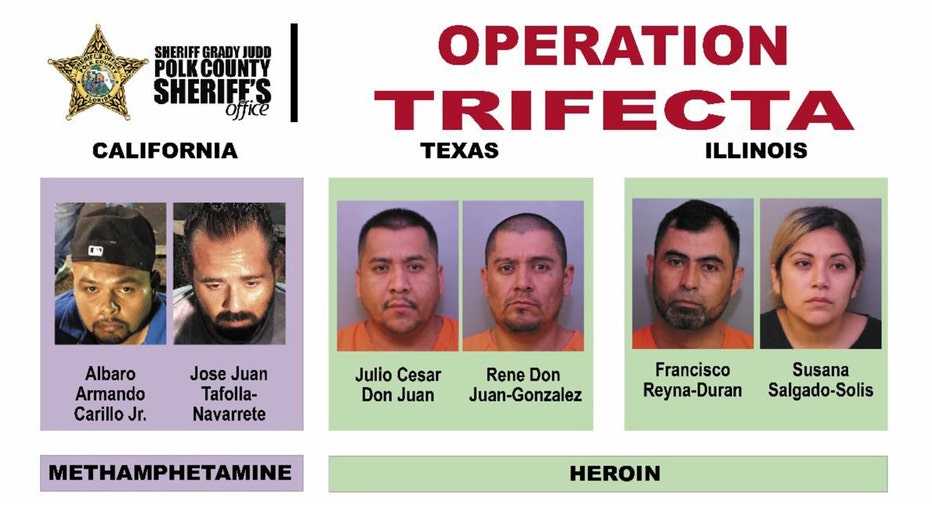 Between all three investigations, approximately $9.5 million of drugs were taken off the streets, Judd said. Over 5 kilos were seized, making it the largest seizure of heroin to date by the agency.

He said when he asked if these suspects had other jobs, he learned they didn’t.

Judd said he was disappointed over the lack of an ICE hold with the California suspects.

“Why didn’t he go to ICE custody and why doesn’t he have an ICE hold?” he asked. “I don’t know what they’re deal is out there. I am dear friends with a lot of sheriffs in California who are very frustrated with the inability to enforce the laws there.”

He said he believes his detectives helped save lives by removing the millions of dollars worth of drugs from the suspects’ possession.