Timeline of the life of Pope Francis

Pope Francis, whose birth name is Jorge Mario Bergoglio, is the leader of the Roman Catholic Church. He's the first pope from South America and from the Jesuit order.

ROME - Pope Francis ate breakfast, read the newspapers and took a walk Tuesday as he continued recovering from intestinal surgery, the Vatican said.

A statement from the Vatican spokesman, Matteo Bruni, said tests performed following the pontiff's Sunday surgery to remove half of his colon yielded "good" and normal result,.

"His Holiness Pope Francis rested well during the night," Bruni said. "This morning he had breakfast, read some newspapers and got up to walk. The post-operative recovering is regular. Routine control tests are good."

Francis, 84, underwent three hours of surgery Sunday for what the Vatican said was a narrowing of the large intestine. The Vatican said doctors removed the left side of his colon.

He is expected to stay in Rome’s Gemelli Polyclinic, which has a special suite reserved for popes, through the week, assuming no complications.

The Vatican has given few details about the pope’s diagnosis or the procedure he underwent, saying only that he had entered the hospital for planned surgery for a diverticular stenosis, or narrowing of the colon. 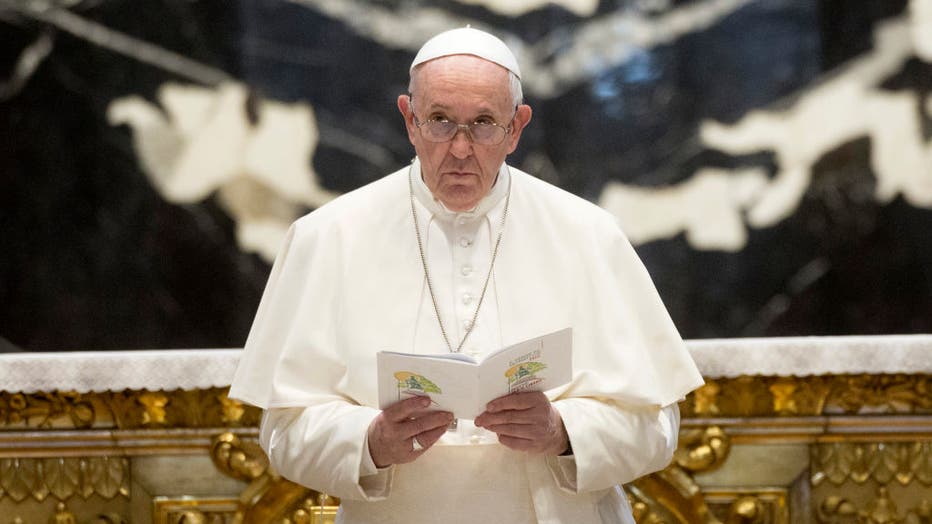 Pope Francis leads a prayer and reflection for peace In Lebanon in St. Peter's Basilica at the Conclusion of the Ecumenical day of Prayer for Lebanon on July 1, 2021, in Vatican City, Vatican. (Photo by Vatican Pool/Getty Images)

It’s a common problem that affects some 80% of people over age 80 but can require surgery if the lining of the colon becomes so scarred that it begins to obstruct it, said Dr. Yann Parc, head of staff at the Saint Antoine Hospital in Paris. Parc was not involved in the pope’s care.

The surgery generally entails removing the left side of the colon and then joining up the remaining healthy parts of the large intestine.

"It looks like the pope had this pathology, and understandably the Italian surgeons have removed that part and stitched it to the rectum to recreate a normal digestive transit," Parc said.

Doctors have said a risk of the operation is that the connection between the joined-up parts of the colon can sometimes fail, causing more pain and possibly an infection. Such a failure is very rare and would require another surgery.

Francis has enjoyed relatively robust health, though he lost the upper part of one lung in his youth due to an infection. He also suffers from sciatica, or nerve pain, that makes him walk with a pronounced limp.

He had a busy schedule in the run-up to Sunday's surgery, including participating in a daylong July 1 meeting with Lebanon's Christian patriarchs, suggesting he was not in excruciating pain before the procedure.

Francis’ next routine appointment with the public would normally be on Sunday, July 11. He customarily appears on Sundays at a window overlooking St. Peter’s Square, blesses the faithful below and speaks for a few minutes, often about current events.

If he remains hospitalized, Francis might opt to do what one of his predecessors did while recovering at Gemelli. During some of his many stays there, St. John Paul II sometimes appeared at his hospital room’s window to wave and bless well-wishers gathered outside.