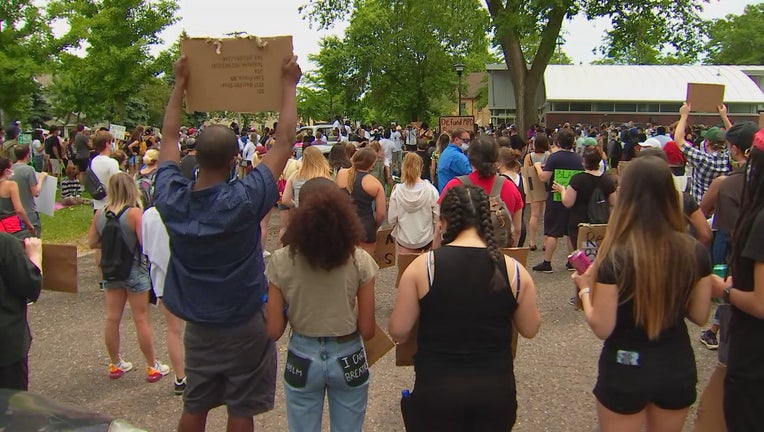 MINNEAPOLIS (FOX 9) - Thousands gathered for another weekend of protests in Minneapolis. Their chants calling for justice for George Floyd but also the defunding the Minneapolis Police Department.

As they marched down University Avenue in northeast Minneapolis on Saturday, thousands called for an end to the city’s police department.

Thousands gathered for another weekend of protests in Minneapolis. Their chants calling for justice for George Floyd but also the defunding the Minneapolis Police Department

"There’s no real path forward without radical change," one member of the rally said.

Organizers of the event are calling for a transition from traditional policing to what they describe as "community-led safety."

"There could be a system of first responders similar to a police force but they should be members of the community, not living in suburbs," said Jordan, another protester from St. Paul. “I think most the jobs that police do can be done by social workers. Let’s hire more social workers and pay them a really good living wage.”

The event organizers, Black Visions Collective, is calling on Mayor Jacob Frey and the city council to defund the police department. Several city council members have said they support such a plan.

"As we strengthen community networks and relationships there will be us looking out for one another so there will be fewer robberies and break-ins and such," said Erika Thorne of Minneapolis.

When the march came to a stop on East Hennepin near Mayor Jacob Frey’s home, the mayor answered calls by the protesters to come outside. When Frey would not commit to abolishing the police, he was quickly pushed out as protesters chanted “go home, Jacob” and “shame.”

In a statement, a spokesperson for Frey’s office said: “The Mayor is committed to working with community towards deep, structural reforms that address systemic racism in our laws and in policing. The mayor does not support abolishing the police department.”

"We’ve tried all these reform initiatives and all these programs," said University of Minnesota student Sandrind Sugi. "There have been black mayors, there was a black president, and nothing has worked and at some point you have to cut it lose."

The group is asking that the nearly $200 million police budget instead be invested in things like mental health resources, the opioid epidemic, and affordable housing.

"What we’re talking about is a process that does need to take place in steps but those steps need to start happening," added Thorne.

Minneapolis Mayor Jacob Frey spoke with FOX 9 about the status of MPD as city leaders push for drastic changes following the death of George Floyd.