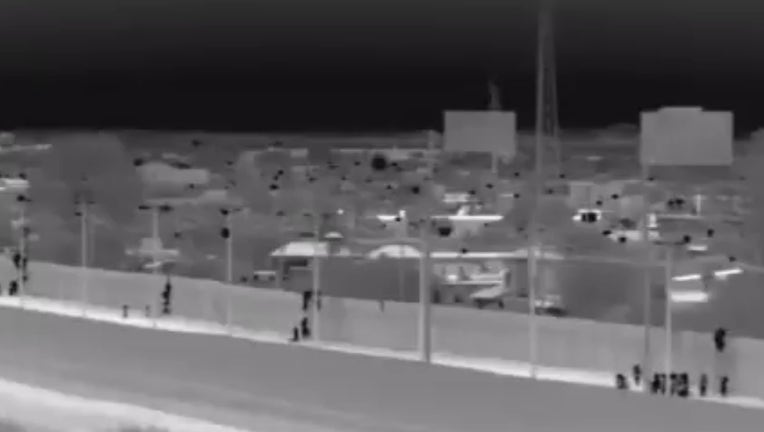 SAN DIEGO (AP) - Immigration has again become a hot political issue as President Donald Trump portrays the Mexico border in a state of crisis, underscored by dramatic images of a caravan of Central American migrants moving toward the U.S. and dozens of people climbing the border fence in Arizona.

The Border Patrol released video Friday of the fence incident near Yuma, Arizona, on the same day that the president traveled to the state for a rally where he stressed the need for a tougher border. The government said smugglers helped the migrants over the wall in four places and that the group was comprised of 108 people, including 52 children.

Trump's critics say the characterization of an out-of-control border is overblown and that Republicans are twisting the issue for political gain more than two weeks before the elections.

Here are some questions, answers and facts about what is happening at the border and with immigration:

WHAT IS HAPPENING AT THE BORDER?

Large groups of Central American families, particularly from Guatemala, have increasingly been making dangerous journeys through Mexico to the U.S. border. Many turn themselves in to U.S. border agents near the banks of the Rio Grande in Texas or in the deserts of Arizona to seek asylum.

Border Patrol agents arrested 16,658 family members in September, up 30 percent from August and up 80 percent from July, according to preliminary figures from Trump administration officials who spoke to AP on condition of anonymity because they were not authorized to give out the numbers.

"If October is any indication, Fiscal Year 2019 is going to be a very busy year," Manuel Padilla Jr., chief of the Border Patrol's Rio Grande Valley sector, tweeted this week.

Agents made 396,579 arrests on the Mexican border during the fiscal year that ended Sept. 30, up 31 percent from a 46-year-low in 2017, according to preliminary figures from the officials. Despite the year-over-year surge, the numbers are still low in historic terms, down 76 percent from more than 1.6 million in 2000.

WHERE ARE MIGRANTS GOING?

The U.S. government is having trouble keeping up with the recent influx, forcing officials to find creative ways to handle the situation.

They have been dropping off immigrants at churches in Arizona, equipping them with an ankle-monitoring bracelet and giving them instructions to make court appearances at a later date. Catholic Community Services of Southern Arizona, coordinating closely with Immigration and Customs Enforcement, recently placed 340 people in motels in Yuma and Tucson until they could leave for other parts of the country.

Family detention space is limited to about 3,300 beds nationally and, under a court settlement, children can generally be held no more than 20 days, causing many families to be released.

Many of the immigrants are seeking asylum from violence in Guatemala, Honduras and El Salvador but the Trump administration has imposed tougher rules for these immigrants. Still, asylum seekers can wait years for their cases to be decided in immigration courts, which have a backlog of nearly 800,000 cases.

In addition, the U.S. continues to see large numbers of children coming to the border without parents. The number of these unaccompanied children held in a network of federally funded locations has soared, including a tent city in Tornillo, Texas, that is being expanded to 3,800 beds.

The White House found itself in a full-blown global crisis this year over a policy of separating children from their parents at the border. More than 2,500 children were separated from their parents after the administration adopted a "zero-tolerance" policy to criminally prosecute every adult who enters the country illegally. Hundreds of parents were deported without their children.

The administration scrapped the policy, but is considering new options to create deterrents for immigrant families.

The government is unable to hold children generally past 20 days under court-mandated guidelines on the care of children in government custody. But administration officials are working to amend the guidelines to allow for longer detentions.

Another possibility officials were considering is to give parents a choice between being detained months or years with their children while pursuing asylum or releasing their children to a government shelter while a relative or guardian seeks custody, administration officials said.

Immigrant advocates say that would leave parents with a horrible choice: face detention together or agree to separation.

The government is moving to create more detention space, but it's a lengthy process.

WHAT'S TRUMP'S TAKE ON IT ALL?

Trump is now touting family separation, even though it is highly debatable that the practice works.

"The one thing I will also say is that when a person thinks they will not be separated our border becomes overrun with people coming in." he told The Associated Press on Tuesday.

Trump has repeatedly lashed out at Central American leaders since a caravan of more than 2,000 migrants that left Honduras, threatening to cut off aid. He tweeted Thursday that he may call up the military to "CLOSE OUR SOUTHERN BORDER!"

The caravan has increased the presence of immigration as a campaign issue with the midterms drawing closer. But it's unclear how many of the immigrants will ever make it to the U.S. on a trek that could extend past the election.

An earlier caravan this year largely lost steam in Mexico and only a couple hundred of the migrants arrived in the U.S. to seek asylum.

Long contributed to this report from Washington, D.C.