WASHINGTON - Supreme Court Justice Ruth Bader Ginsburg was absent from the courtroom Wednesday, missing arguments in two cases due to illness, according to court officials.

Chief Justice John Roberts announced that Ginsburg was “indisposed due to illness” prior to court proceedings but said that she planned on participating in the consideration of the cases by reading briefs.

At 86, Ginsberg is the oldest member of the Supreme Court. If she were to die or retire prior to the 2020 election or inauguration, Senate Republican leader Mitch McConnell has said that the GOP would push to fill the vacancy as soon as possible in order to achieve a 6-to-3 conservative majority on the court that would likely retain its control for decades to come.

Ginsburg’s health issues have spurred much concern over the past 20 years — she has battled four bouts of cancer, beginning with surgery followed by nine months of chemotherapy and radiation to treat colorectal cancer in 1999. Ginsburg underwent surgery for pancreatic cancer in 2009, and then for lung cancer last year. 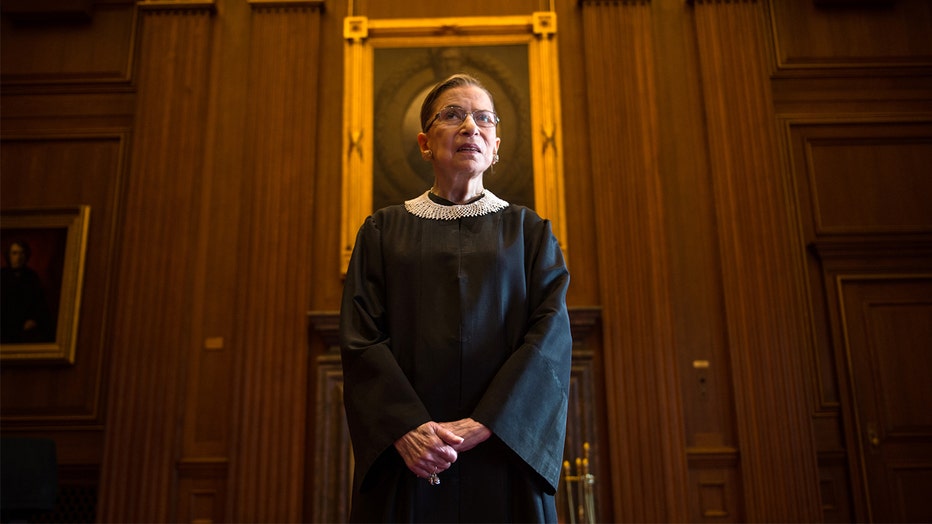 Supreme Court Justice Ruth Bader Ginsburg, celebrating her 20th anniversary on the bench, was photographed in the East conference room at the U.S. Supreme Court in Washington, D.C., on Friday, August 30, 2013. Ginsburg is now 86, making her the oldes (Nikki Kahn/The Washington Post via Getty Images)

In August, the Supreme Court announced that Ginsburg had complete a three-week course of radiation therapy at Memorial Sloan Kettering Cancer Center in New York City to treat a malignant tumor on her pancreas.

“The Justice tolerated treatment well,” the court announced in a press release. “She canceled her annual summer visit to Santa Fe, but has otherwise maintained an active schedule. The tumor was treated definitively and there is no evidence of disease elsewhere in the body. Justice Ginsburg will continue to have periodic blood tests and scans. No further treatment is needed at this time.”

Ginsburg has remained resilient and positive throughout treatment and has taken many opportunities to show off her vitality. Earlier this summer, before she underwent her most recent bout of radiation for the tumor on her pancreas, Ginsburg sat down for an interview with NPR in which she got the last laugh over those who have anticipated her demise.

"There was a senator, I think it was after my pancreatic cancer, who announced with great glee that I was going to be dead within six months," Ginsburg said before breaking into a sly smile. "That senator, whose name I have forgotten, is now himself dead, and I am very much alive."