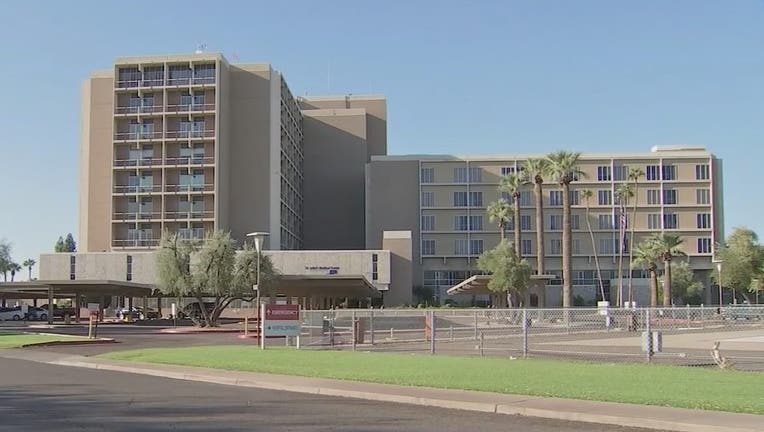 PHOENIX - Contractors overseen by the U.S. Army Corps of Engineers are completing the rehabilitation of a shuttered Phoenix hospital planned to house coronavirus patients. The work comes amid signs a spike of cases may not emerge in Arizona and as Gov. Doug Ducey nears a decision on whether to ease his closure and stay at home orders.

The $4.1 million rehabilitation of St. Luke’s Medical Center should be done by the end of the week and handed to the state Department of Health Services.

Health Services officials on Monday reported no new virus deaths for the first time in a month, holding steady at 275. The state reported its first death on March 21 and had only two other days without deaths before Monday. Confirmed cases climbed to 6,716 with 190 new cases.

Last week saw a major surge of deaths, with three days of 20 or more.

Ducey issued a stay at home order for all non-essential activities on March 30, after closing schools until next fall, ordering bars, restaurants and movie theaters to close and taking a series of other steps. He's expected to decide this week whether to end or ease the stay-home order or loosen other restrictions.

He said he will take his cue from Health Services Director Dr. Cara Christ, who had been monitoring key data to determine if it is safe to reopen a state economy that has seen nearly 420,000 people lose their jobs.

“Anything we do will be very gradual,” Christ said in a Friday interview. “Kind of like we opened the elective surgeries this week, we might take steps like that – its not a full phase one opening. But it would be things that keep the public safe that potentially we could open."

The work at St. Luke's is among a series of steps to prevent an overload of the state’s medical system. Hospitals have also been ordered by Ducey to boost capacity by 50%, sites have been chosen for overflow patients and a “surge line” that helps spread out patients among the state's hospitals has now been running for a week.

That system has helped hospitals like Flagstaff Medical Center, which has been inundated with patients mainly from the Navajo Nation, where a major virus outbreak has been underway.

“In some cases the surge line was able to help them so that the patients could remain up there closer to home if necessary, but that’s exactly what that line is for,” Christ said. “To reduce the pressure and bring them down to the central or southern region, if, there’s available capacity.”

At St. Luke's, a 254-bed hospital that was closed late last year, the Army Corps has been overseeing the overhaul. It wasn't as easy as expected, said Col. Daryll Fust, who is overseeing the project.

“The problem is everybody is under the impression that the hospital was in great shape when they closed the door in November,” Fust said. “But we found a litany of issues that has been basically deferred by the owners because they knew they were closing for quite a long while.”

Those included major plumbing issues, "miles and miles" of heating and cooling ducts where virtually every actuator had failed and major components needed replacing or repair, as well as electrical issues.

Fust said the Corps should complete the work by Friday.

“We’re trying to return it to a functional status, but also taking care of all the things that weren’t working before and all the troubles that we found along the way," he said.

Christ said the state has identified a Walgreens warehouse in Flagstaff and a former Dillard's department store at the closed Fiesta Mall in Mesa as emergency hospital locations. They could be opened within weeks if needed to care for patients leaving regular hospitals but still too sick to go home. The Tucson Convention Center also is being considered.

It isn't clear yet whether Arizona has reached its peak, Christ said.

As of Monday, 1,000 people were hospitalized, with 481 on ventilators to help them breathe. In addition to the spike in deaths, new cases continued to climb last week, but tracking of emergency room visits of people with COVID-like illnesses has decreased since late March.

For most people, the coronavirus causes mild or moderate symptoms, such as fever and cough that clear up in two to three weeks. For some, especially older adults and people with existing health problems, it can cause more severe illness, including pneumonia, and death. The vast majority of people recover.