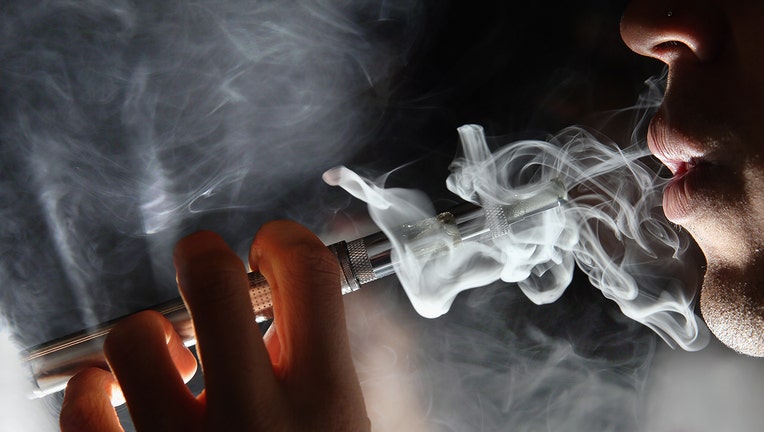 In this photo illustration, a man smokes an E-Cigarette. (File photo by Dan Kitwood/Getty Images)

CHICAGO (AP) - New research shows 1 in 7 U.S. adults have tried electronic cigarettes. That's an increase but it's offset by a small decline in the number currently using the devices.

About 3 percent of adults were current users in 2016, down from almost 4 percent in 2014, the study found. Adults who said they have tried vaping at least once reached just over 15 percent in 2016, versus 12.6 percent in 2014. That means an estimated 33 million U.S. adults have tried e-cigarettes, said University of Iowa researcher Dr. Wei Bao, the lead author.

The decline in e-cigarette use among current smokers and increased use among former smokers suggests that some adults are using them to quit smoking tobacco. But a rise in use among adults who never smoked tobacco is concerning, Bao said.

The study was published Tuesday in the Journal of the American Medical Association.

E-cigarettes are battery-powered devices that turn liquid often containing nicotine into an inhalable vapor. They have been sold in the United States for about a decade.

The devices have been touted as a way to help smokers quit traditional tobacco products but solid evidence of that is lacking, and uncertainty over their long-term health effects has raised concerns about their use, especially by teens. Under federal law, sales are banned to those under 18.

Previous data show recent use among U.S. teens declined in 2016 after rising in previous years. In 2016, 11 percent of U.S. high school students and 4 percent of middle schoolers said they'd used the devices during the previous month.

In the new study, researchers analyzed annual U.S. government in-person surveys for 2014 through 2016 that asked Americans aged 18 and older questions about health-related habits. About 100,000 adults were involved.

Current use included adults who use e-cigarettes daily or just some days; ever-use included those who frequently used the devices in the past and adults who have only tried them once.