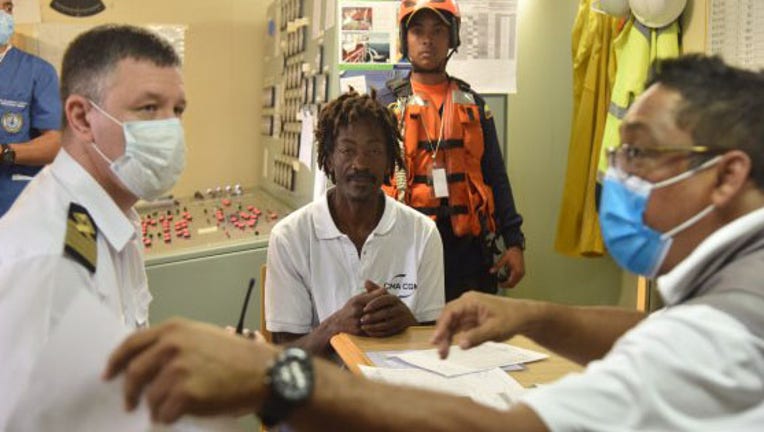 BOGOTA, Colombia - The Colombian navy rescued a man from Dominica who says he survived 24 days adrift in the Caribbean on a sailboat by eating ketchup, garlic powder, and seasoning cubes.

Elvis Francois, 47, had scrawled the word "help" in English on the boat's hull, which officials said was key to his rescue.

The sailboat was spotted from the air 120 nautical miles northwest of La Guajira peninsula and Francois was taken to the port city of Cartagena by a passing container ship, the Colombian navy said in a statement Wednesday.

Francois told Colombian authorities that his ordeal began in December when currents swept the sailboat out to sea while he was making repairs off the island of St. Martin in the Netherlands Antilles, where he lives.

"I called my friends, they tried to contact me, but I lost the signal. There was nothing else to do but sit and wait," Francois recalled in a video released by the navy.

He said subsisted on a bottle of ketchup, garlic powder and Maggi cubes.

Cmdr. Carlos Urbano Montes told The Associated Press on Thursday that Francois said he collected rainwater with a cloth. He said Francois was found in good health, but told official he had lost weight.

Francois said on the videotape that he had to constantly remove water from the boat to prevent it from sinking. He also tried to light a fire to send a distress signal without success.

A Colombian woman who had fallen off the grid two years ago was miraculously discovered alive at sea by flabbergasted fishermen. (Credit: Rolando Visbal via Storyful)

Finally, a plane passed by and he signaled with a mirror. He said the navy told him that he was spotted when the plane passed again.

"At some point I lost hope and thought about my family, but I thank the coast guard. If it weren’t for them I wouldn’t be telling the story," Francois said.

Urbano Montes said the sailboat was abandoned at sea when Francois was picked up by the merchant ship.

The navy said Francois received a medical check on shore and then was handed over to immigration authorities for his return home to Dominica.