MESA, Ariz. - A Salt River Fire Department firefighter has died and another is in extremely critical condition after a crash on State Route 87 in Mesa, according to officials on April 8.

The crash, according to the Arizona Department of Transportation, happened near Circle Street and State Route 87. The freeway was closed in both directions for hours while the crash investigation continued.

The crash involved an ambulance and tractor-trailer. Authorities say the ambulance was responding to an emergency 911 call at the time.

Arizona Department of Public Safety (DPS) stated that "the ambulance was attempting to pull out from a side street when it was struck by the semi."

The EMT driving the ambulance died in the crash, and a paramedic passenger is in extremely critical condition. The driver of the semi sustained minor injuries.

At the scene, DPS Captain Paul Etnire said as the ambulance was pulling out to turn left onto SR 87 northbound, it collided with the semi heading southbound. The crash pushed the two vehicles across the highway and into the ditch. The front cab of the ambulance was torn off, and the semi-truck was left mangled.

"This is just a tragedy, and it’s a tragedy for anybody who dies on our roadways," said Capt. Etnire.

Impairment wasn't a factor in the crash, authorities confirm.

The firefighter who died in the crash was identified as Brendan Bessee, 24, by the Globe Fire Department, where he worked as a reserve firefighter. The other injured paramedic's Tyler Packer and he's in critical condition.

A GoFundMe has been set up for Packer and it can be found here.

"They were two of my firefighters for the community and recent hires," said Salt River Fire Department Chief Daryl Dash. "They’ve been with the department for a little over four months, and great guys, great individuals. It’s a tragic loss that we’ve lost one of them."

Chief Dash said April 8, 2022, will be a day he will never forget, as he never imagined two of their own first responders would need emergency help themselves.

In the hours following the crash, fire crews from across the Phoenix area came out to honor the crew, as a procession took the body from the crash site, and to the Medical Examiner's Office in Downtown Phoenix.

"Pretty much every fire chief has reached out to us to show their support, and we really appreciate it, especially this time," said Chief Dash.

Bessee's passion was playing hockey. He played for the GCU Club Hockey Team during the 2018-2019 season. He played in six games before being injured.

"Although his stint with the team was short, his impact on our team's success during that time was very noticeable. Brendan was one of our hardest-working players. He played fearlessly every shift and was an amazing teammate," said Bessee's former GCU coach Danny Roy. 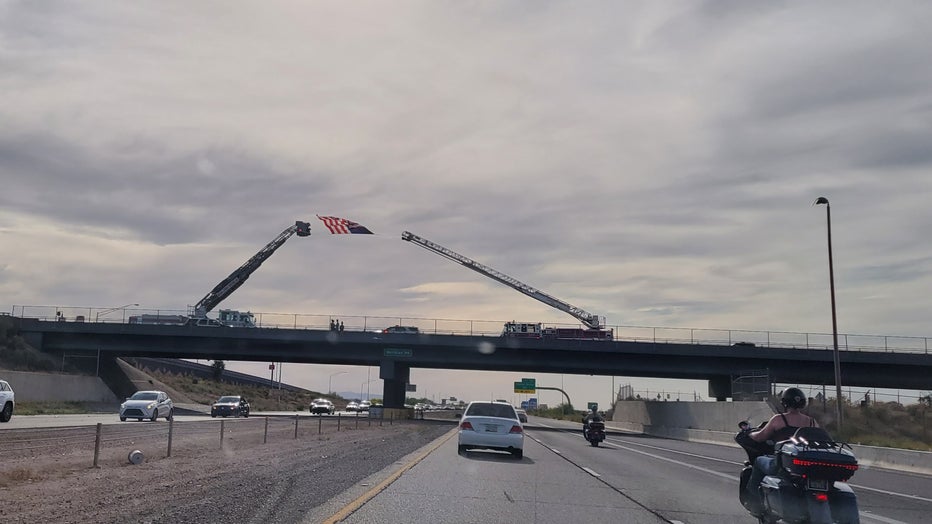 First responders pay their respects as a procession was planned to line the freeway on April 9 in honor of a fallen Salt River firefighter. Photo courtesy of Stacey Stubbs

Around 5 p.m. on April 9, a procession was held in honor of Bessee, heading from the Maricopa County Medical Examiner in downtown Phoenix to Globe, his home.

"We join in mourning the loss of Firefighter/EMT Brendan Bessee. Brendan also served the Globe/Miami community as a Reserve Firefighter with Globe Fire. Our prayers are with his family as well as the brothers and sisters he served with, remarked Globe Fire Chief Gary Robinson.

Arizona Governor Doug Ducey has ordered flags to lowered to half-staff on April 13 in honor of Brendan Bessee, a Salt River firefighter and EMT who was killed in a crash last week. Bessee, 24, was driving an ambulance on the Beeline Highway when it collided with a tractor-trailer. Fellow paramedic Tyler Packer was critically injured.

Melinda Jackson and her niece Brittney have seen many bad accidents on SR-87, also known as Beeline Highway. The crash that took the life of Bessee hits the community extra hard, they say.

People have hung ribbons on trees around station 294, a memorial is growing in the station parking lot, expressing condolences and gratitude. A hockey stick pays tribute to Bessee.

The community didn’t know him, but Jackson says they are forever grateful.

Arizona Gov. Doug Ducey announced flags will be lowered to half-staff on April 13 in honor of Bessee.

A crash involving an ambulance has closed off State Route 87 in Mesa, according to officials.

The crash, according to officials, involved an ambulance and a semi along State Route 87 in Mesa. FOX 10's Stephanie Bennett reports.

A procession was underway from the Maricopa County Medical Examiners Office to Globe after a Salt River firefighter was killed in a crash on SR-87 on Friday, April 8. The firefighter who died in the crash was identified as Brendan Bessee by the Globe Fire Department, where he worked as a reserve firefighter.

Major Phoenix-area freeway closures, restrictions this weekend: What to know for April 8-11

Several major closures will be in effect this weekend on I-10 and I-17 in the Phoenix area due to pavement maintenance and other improvement projects.

Road rage shootings more than doubled in Arizona over the past 4 years, figures show

Road rage shooting has become a bigger problem for Arizona drivers, with statistics showing such incidents have more than doubled over the past four years.