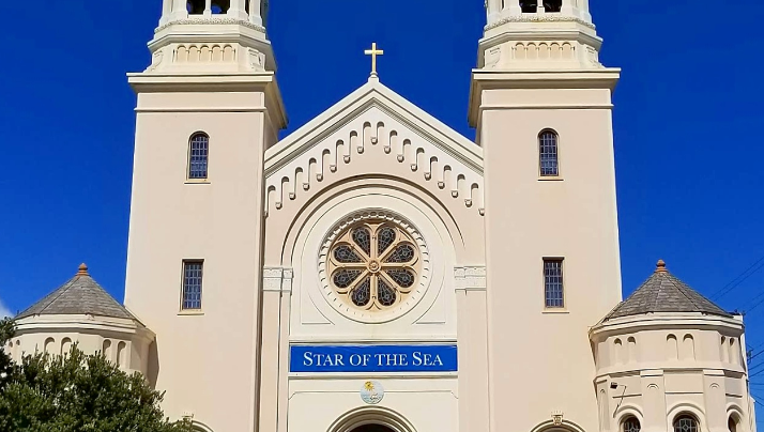 Star of the Sea Church on Geary Boulevard in San Francisco.

SAN FRANCISCO - A San Francisco priest who is also a prolific blogger chastised his worshipers for staying away from church, saying many people appear to be "more concerned with safety than sanctity" and that "fear has replaced faith."

In a weekend church bulletin, Father Joseph Ilo of Star of the Sea Catholic parish said that has a priest, he knows thousands of people. And how many of those have Covid? he asked rhetorically.

After threats from city, Catholic archbishop in SF agrees to obey coronavirus rules

"Many have stopped attending Mass to avoid the slightest chance of getting sick," Ilo wrote. "Covid is real but please know that news reports on Covid are largely unreal."

Ilo also brought politics into the fray, noting that stoking fear about the deadly virus is raging during an election year.

"Those who control the media have stated a vitriolic opposition to our incumbent president," he wrote.

President Donald Trump has also questioned the seriousness of the virus, choosing only recently to wear a face mask.

However, the numbers are real. About 150,000 people in the United States and 8,500 people in California have died of coronavirus, according to data provided by Johns Hopkins University.

It wasn't immediately clear if Star of the Sea at 4420 Geary Boulevard is actually holding live, in-person worship services indoors, which would be a violation of San Francisco's health orders during the coronavirus pandemic.

Ilo referred questions to a spokesman, who didn't have the answer.

Statewide, to be allowed to host indoor services, churches must limit attendance to 25% of building capacity or a maximum of 100 attendees, whichever is lower. But indoor services are not allowed in counties on the state's monitoring list for three consecutive days, which San Francisco falls under. And even so, San Francisco's rules are stricter than the state's and is not allowing indoor worship services at this moment.

And in a limited capacity, outdoor services are allowed, as long as worshippers wear masks and don't sing. 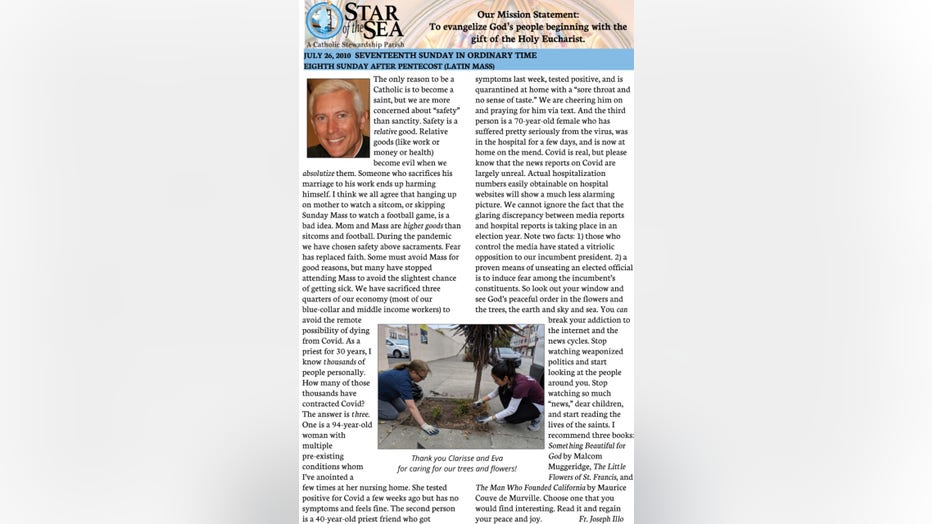 Star of the Sea was one of three churches targeted recently by the San Francisco City Attorney's Office.

In early June, the city attorney called out Ilo specifically for hosting a large rosary. And the next week, San Francisco also received a complaint that the Star of the Sea held  Mass in person, confirmed by a video posted on YouTube of the sermon given where neither the priest giving the sermon nor the altar boy are wearing face coverings.

Star of the Sea is not the only church to have contested the shelter-in-place orders.

Throughout California and the country, individual pastors have said that they listen to a higher authority and have argued, sometimes in court, that not being able to meet with others and pray is a violation of their constitutional rights. In turn, there have been coronavirus outbreaks following many of these services, including in Rancho Cordova near Sacramento as well as in Mendocino and Butte counties, to name a few.

News of the Star of the Sea also comes after Saints Peter and Paul Church in San Francisco's North Beach hosted a wedding in early July, after which at least 10 guests tested positive for the coronavirus, including the newlywed couple, two guests told the Chronicle.

On Tuesday, the Chronicle also reported that the city likely won't cite the Catholic Archdiocese for the wedding, even if it came days after the office sent a cease-and-desist letter ordering church officials to stop holding large, indoor services.

Right after the letter was sent, the Archbishop of San Francisco promised, through its lawyer,  to stop holding these gatherings and has now repeated that order to the priests.

Archdiocese spokesman Mike Brown told KTVU on Tuesday said he really doesn't know the particulars of what goes on at the Star of the Sea, or any of the other 90 parishes in its jurisdiction, noting the decentralization of the church.

"The Archdiocese isn't in the business of monitoring liturgies, weddings and funerals," he said. "It's not a question of top-down enforcement."

He said that the Archbishop regularly sends out letters to the priests reminding them to follow county public health orders.

But as for Ilo's specific COVID-19 comments?

"Parish priests write a lot of things," Brown said. "Father Ilo is an active blogger. He writes every week and he's got quite a following. None of what he writes is reviewed before, during or after its published."

Tani Nagoakka of Berkeley said that "it is very important for Catholics to be at Mass to worship and to receive sacraments. This is where God blesses us with grace. We feel such sadness without these. It is part of the tradition of our Church and keeps us spiritually healthy which is even more important than physical health."

Personally, she has been "attending" services online, but have gone to Mass outdoors in Oakland last week and in Mountain View the previous week.

However, Joan Schwarz grew up Catholic and said she doesn't need to go to a church to feel spiritual.

"God is everywhere," she said. "I talk with God every day, sometimes all day and I know He hears me."

In her opinion, the reason this priest, and most priests for that matter, wants people to actually attend church because "that’s where the collection plate is."