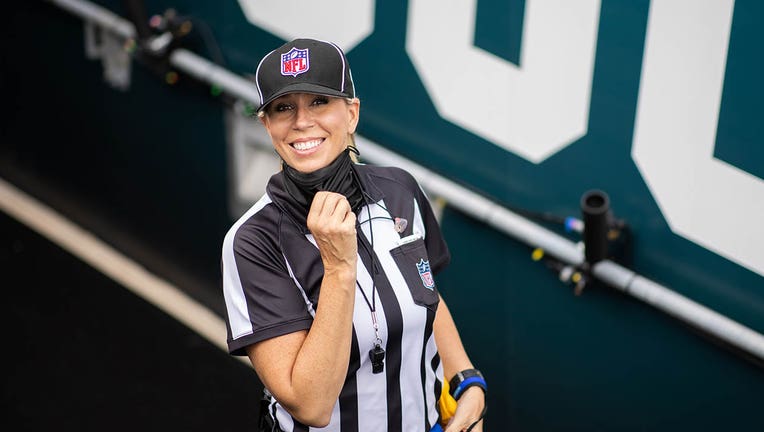 JACKSONVILLE, FLORIDA - OCTOBER 18: Line judge Sarah Thomas #53 poses for a photo before the start of a game between the Detroit Lions and the Jacksonville Jaguars at TIAA Bank Field on October 18, 2020 in Jacksonville, Florida. (Photo by James Gilbe

TAMPA, Fla. - While Super Bowl LV will already be a historic one with COVID-19 restrictions and the Tampa Bay Bucs playing on their home field, it will also be the first time a female will officiate the big game.

Sarah Thomas, a down judge, will be part of the officiating crew. It will cap her sixth NFL season by becoming the first female to officiate the Super Bowl in NFL history.

In 2015, she was named the first full-time female NFL official. Later on, Thomas became the first female to officiate an NFL playoff game in 2019.

"Sarah Thomas has made history again as the first female Super Bowl official," Troy Vincent, Sr., the NFL’s executive vice resident of football operations, said in a statement. "Her elite performance and commitment to excellence has earned her the right to officiate the Super Bowl. Congratulations to Sarah on this well-deserved honor."

Despite the pandemic, Mayor Jane Castor says it's possible to host a safe Super Bowl.

Referee Carl Cheffers will lead the seven-person crew of on-field game officials. Cheffers has been a game official for 21 seasons in the NFL and was promoted to referee in 2008. He has worked 17 playoff games, including the Super Bowl in 2017.

This will be the first Super Bowl for Coleman as well as Thomas and second for Cheffers, Bryan, Baynes, Hall and Paganelli.

"Their body of work over the course of a 17-game season has earned them the honor of officiating the biggest game on the world’s biggest stage," Vincent said. "They are the best of the best."