Thunberg scolded the audience at the U.N. Climate Action Summit on Monday, repeatedly asking, "How dare you?"

“My message is that we’ll be watching you,” she said. “This is all wrong. I shouldn’t be up here. I should be back in school on the other side of the ocean. Yet, you all come to us young people for hope. How dare you!” 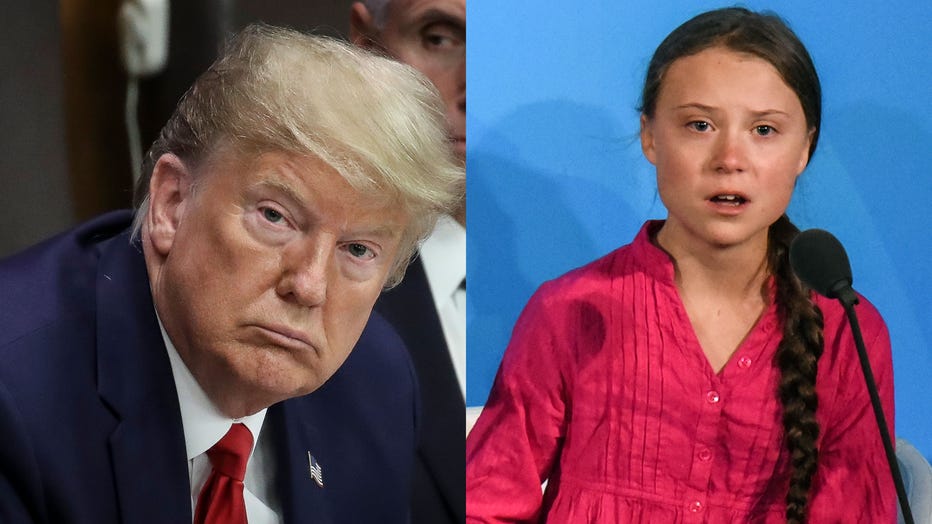 Thunberg started the climate strike movement with a lone protest in front of her country’s parliament about a year and a half ago.

"We are in the beginning of a mass extinction and yet all you can talk about is money. You are failing us," Thunburg added.

In a tweet late Monday, Trump said: "She seems like a very happy young girl looking forward to a bright and wonderful future. So nice to see!"

Trump spent only a few minutes at the climate summit, a centerpiece of this year's U.N. General Assembly schedule, choosing to focus instead on religious persecution — an issue that resonates with his evangelical supporters.

The president arrived in New York against a backdrop of swirling international tensions, including questions about his relationship with Ukraine, the uncertain future of Brexit, the U.S. trade war with China, stalled nuclear negotiations with North Korea and a weakening global economy. Trump met Monday with leaders of Pakistan, Poland, New Zealand, Singapore, Egypt and South Korea.

He will speak before the U.N. General Assembly Tuesday, with his administration's desire for a collective response to escalating aggression by Iran high on the agenda.