The FOX Forecast Center will keep an eye on a series of storm systems across the U.S. that will bring rain, snow and even severe weather to millions of Americans this week.

Your location will mean everything as temperatures will dictate what type of precipitation will fall in the frozen variety and where severe weather, including possible tornadoes, could develop.

You can stay ahead of the disruptive weather by downloading the FOX Weather App. America’s Weather Team will monitor the storm systems and send alerts when dangerous weather approaches your area.

Here are the four weather events that the FOX Forecast Center will be tracking this week.

AAA estimated that about 55 million Americans would travel 50 miles or more over the Thanksgiving holiday, and Sunday is expected to be a busy travel day as everyone heads home.

But a potent storm system is bringing much-needed rain across the eastern half of the country, and that will likely lead to some delays on the roads and even in the sky for those catching a flight back home.

"There’s a big area of low pressure that we’re tracking, and this is bringing with it showers, and a couple of rumbles of thunder in and around Atlanta," FOX Weather Meteorologist Michael Estime said.

So for people catching a flight at Hartsfield-Jackson Atlanta International Airport, there may be delays and even cancellations due to the rain.

The precipitation also stretches to the north into places like Chicago, so passengers heading to Chicago O’Hare International Airport should call ahead to ensure flights are still scheduled and on time before heading off to the airport.

The storm system will continue to push off to the east during the day on Sunday, bringing the wet weather to places like Washington, Philadelphia, New York City and Boston. 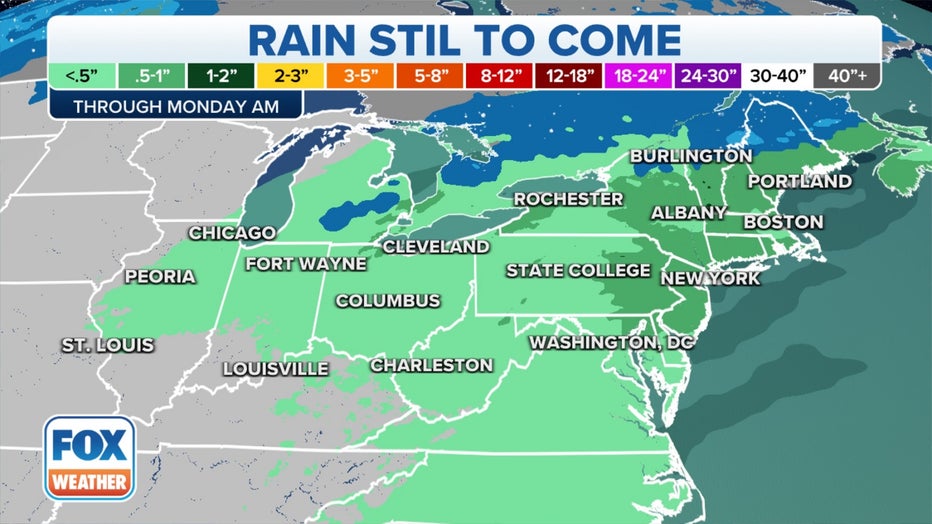 "Speaking about New York, we’re expecting wet weather to move on through by about midday (Sunday)," Estime said. "So, if you’re going to be heading out to any of the airports in New York, expect rain."

And while rain will mainly fall across the Northeast and New England, some areas in the higher elevations could see snow by the time the system winds down on Monday.

"Places like Burlington, Vermont, upstate New Hampshire and northern Maine, a couple of snowflakes are getting ready and set to move in by daybreak on Monday," Estime said.

In terms of rainfall totals, this will not be a flooding weather event.

"On average, about a half-inch of rain is possible," Estime said. "A couple of spots, in and around Toledo, Ohio, I-75 there, could pick up around an inch, maybe two inches in the heaviest rain bands."

Severe storms, including tornadoes, possible in the South this week

As that storm system exits the country on Monday, another will approach parts of the South on Tuesday. That system could trigger severe thunderstorms, including a few tornadoes, in parts of Texas, Louisiana, Arkansas, Mississippi and Tennessee.

This threat comes after the National Weather Service confirmed an EF-1 tornado in St. Charles Parish just west of New Orleans on Saturday. 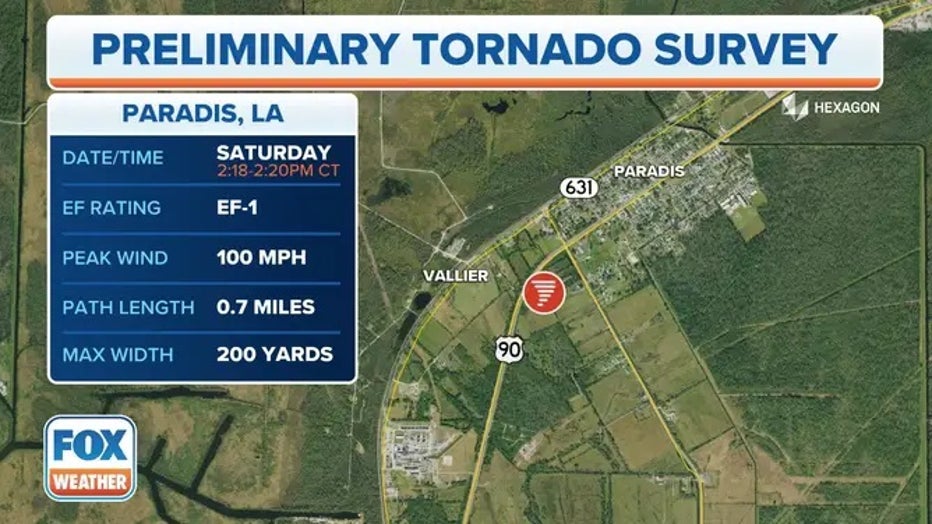 An EF-1 tornado touched down in Paradis, Louisiana on Saturday.

The tornado touched down in the city of Boutte and brought down trees and the roof of a building, causing damage to several other buildings between Wisner Street and Highway 306 in Paradis.

"As we look ahead to Tuesday, there’s pretty high confidence this far out that we have the chance for severe weather again, likely to hit portions of East Texas right through Louisiana into Mississippi," FOX Weather Meteorologist Craig Herrera said. "The chance does extend all the way into portions of Kentucky and into Tennessee as well." 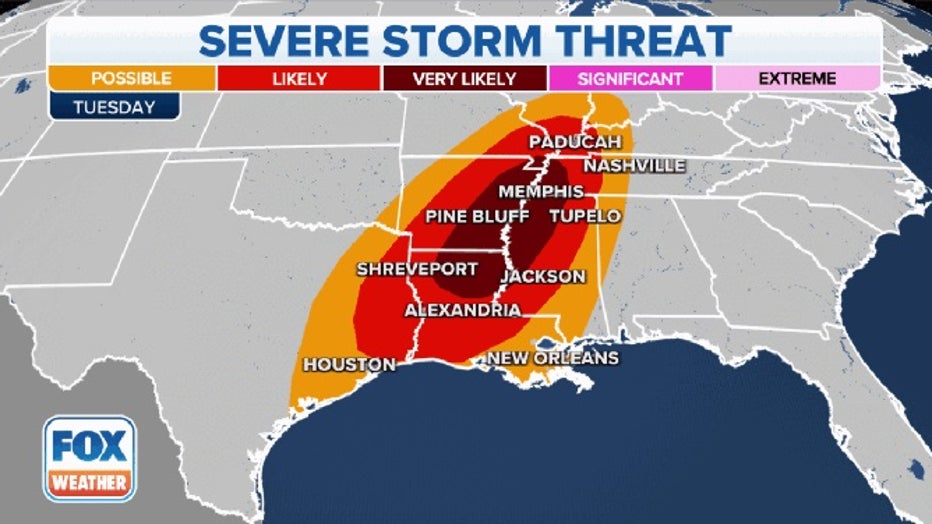 Herrera said the timing of the storms is still in question, but it appears as though the severe weather could develop late Tuesday into the overnight hours.

"The chance for tornadoes is there, some damaging winds and some hail with this one as well," Herrera said.

And tornadoes that do develop could be strong (EF-2 or greater).

So, if you’re among the millions of people living in Shreveport and Lake Charles, Louisiana, Jackson, Mississippi and Memphis, Tennessee, you should have the FOX weather app handy, and notifications turned on in case any tornado warnings are issued overnight.

Snow expected from the Rockies to the Midwest

Snow is expected to break out Monday night across western Nebraska, and South Dakota as an area of low pressure moves off the Rocky Mountains, according to the FOX Forecast Center.

As the low begins to strengthen, the snow will increase in coverage and intensity on Tuesday.

That means snow will likely stretch from Colorado to Minnesota, and during the second half of Tuesday, a band of heavier snow is expected to develop in eastern Nebraska, southern Minnesota and northern Wisconsin. 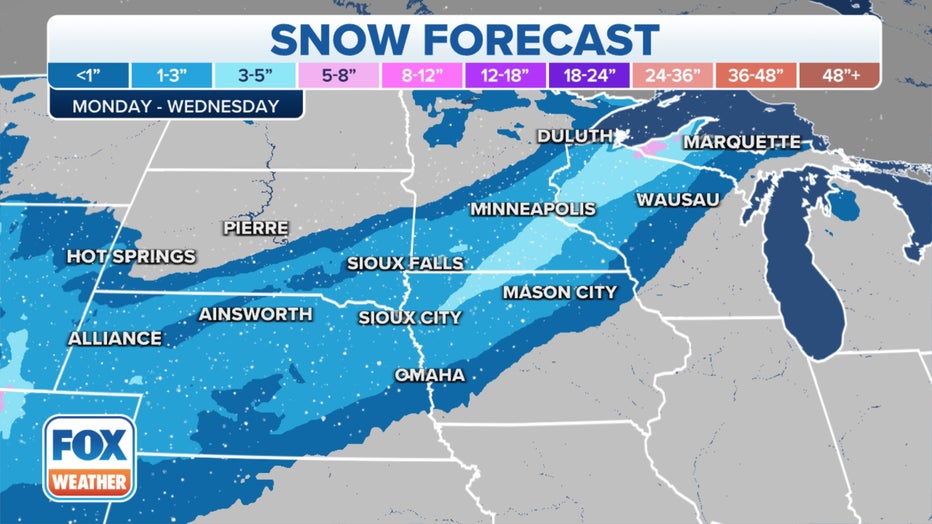 Those are the locations where snow totals will be the highest.

The FOX Forecast Center believes at least 3 inches of snow could fall, and a few places could see snow totals as high as 6 inches in some areas.

If you’re going to be out on the roads on Tuesday and Wednesday, travel could be slower along I-80, I-90 and I-35.

HOW TO PREPARE YOUR FAMILY, HOME CAN CAR FOR A WINTER STORM

Series of storms to impact the Northwest

Temperatures will be much cooler in the Pacific Northwest, and wet weather could last through the entire workweek.

"Traveling today, it’s going to be a tough day, especially over the Cascades," Herrera said. "We just had the Apple Cup, so people headed over to eastern Washington and are trying to get back to western Washington, or students are trying to get back over the Cascades. It’s going to be tough. If they can postpone the trip, that would be great because of the snow coming down."

Rain will fall in low-lying areas, like Seattle, over the next several days.

Winter Weather Alerts have been posted in the Cascade Mountains from the Canadian border to the Oregon-California state line.

And the FOX Forecast Center believes as much as three feet of snow could fall before the storm system moves out.

Seattle will be chilly, and temperatures there will be cold enough to allow a few snowflakes to fall. However, impacts from the winter weather in the Emerald City are expected to be limited. 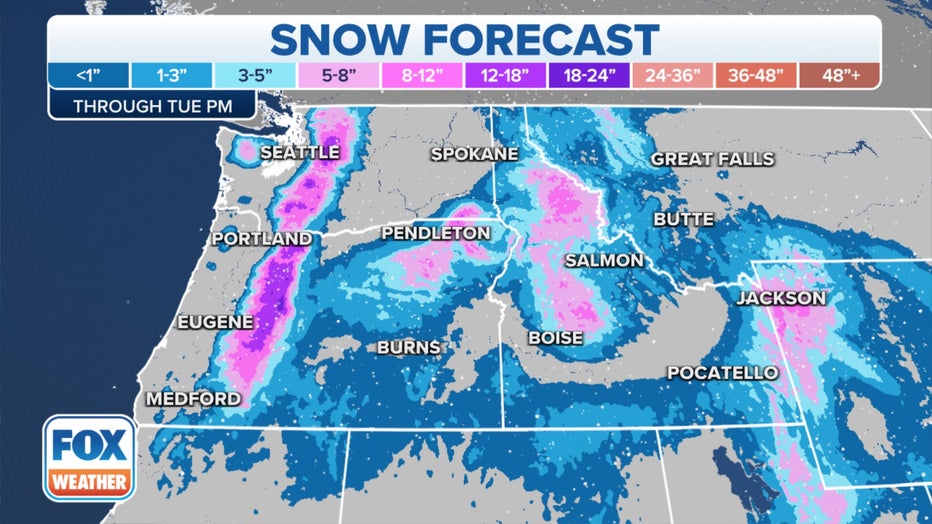 The winter weather made for some treacherous driving conditions Saturday in southeastern Washington, and the Washington State Patrol reported responding to several crashes where freezing fog and slick roads were to blame.

The FOX Forecast Center also believes another round of wintry precipitation will begin in the middle of the week and could last through the weekend.

Forecast models show some heavy snow impacting the Cascades, which could lead to officials shutting down mountain passes to travel. 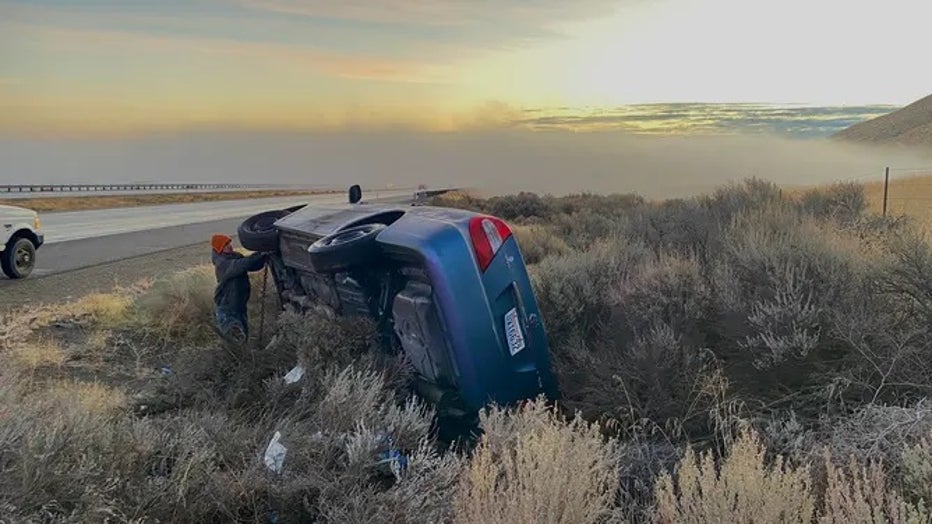 Some of the moisture could also make it as far south as California and the Sierra Nevada, which desperately need the rain.

Large areas of California and Nevada are experiencing drought conditions that have been classified as extreme and exceptional. 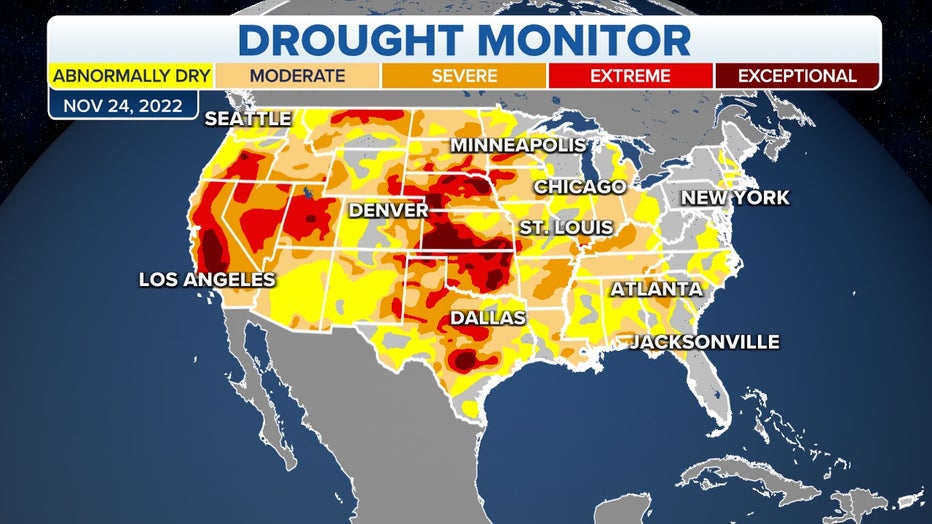