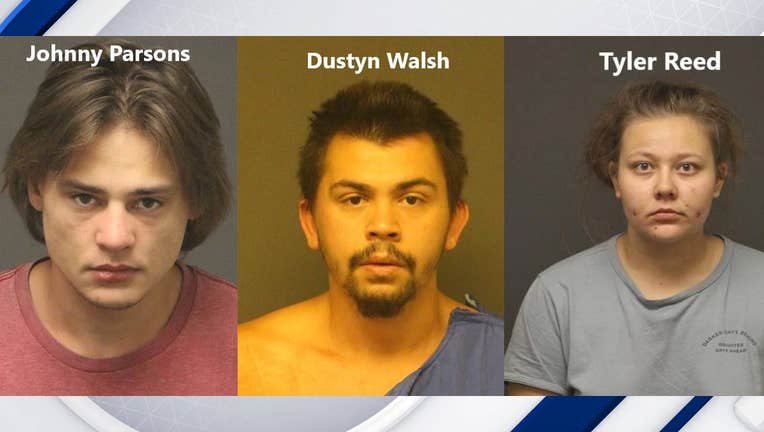 KINGMAN, Ariz. - Three Mohave County residents have been arrested in the killings of two people found dead in a residence in the northwestern Arizona rural community of Chloride, the county Sheriff’s Office said.

The Sheriff’s Office identified those arrested on the night of Sept. 30 as Dustyn Wade Walsh, 19; Johnny Ford Parsons, 20, and Tyler Susanne Reed, 19, all of Golden Valley.

The victims were previously identified as Bryan Dean Drake, 57, and Robin Rae Hammontree, 61, both of Chloride.

Sheriff’s officials didn’t disclose the relationship between Drake and Hammontree or say how they were killed.

However, a statement announcing the arrests said detectives learned that Walsh, Parsons and Reed went to the victims’ residence to confront Drake about unspecified allegations “from several years prior.”

“The confrontation became physical, resulting in the death of Drake and Hammontree. Walsh, Parsons, and Reed also ransacked the residence and stole several items within the residence, as well as the victim’s vehicle, which was later located abandoned. All three subjects admitted their involvement in this incident,” the statement said.

Today’s News Herald, a newspaper in Lake Havasu City, reported on Oct. 1 that Drake was arrested in 2018 on suspicion of sexual abuse, molestation of a child and sexual conduct with a minor under the age of 15.

The victim alleged instances of sexual abuse by Drake between 2009 and 2015, according to the newspaper, which said Drake was tried last year and acquitted in County Justice Court.

Sheriff’s deputies were called out to the Chloride residence by a neighbor about 8 p.m. on Sept. 28 and found the two bodies inside.

Online court records didn’t indicate whether they have attorneys who could comment on their behalf.

Chloride is an old mining town 20 miles west of Kingman.