Lockdown orders easing and greater testing availability were among factors that contributed to the rise in cases.

LOS ANGELES - In the battle against COVID-19, some public health officials in the U.S. are being pushed out or choosing to quit their jobs amid a lack of support from elected officials, a gross shortage in critical infrastructure and an onslaught of attacks from the public.

Nurses, doctors and other medical officials that make up a patchwork army on the front lines of the fight to stop the spread of the novel coronavirus are in many places under assault, despite being paramount to ending the pandemic.

"While the devastation experienced by so many is heartbreaking, it is also disheartening that an increasing number of public health officials, across the country—myself included—are threatened with violence on a regular basis," Ferrer said in a released statement.

According to Ferrer, the threats against her began last month during a COVID-19 Facebook Live public briefing when someone "very casually suggested that I should be shot," said Ferrer.

Ohio’s Dr. Amy Acton, who resigned June 11, had a security detail assigned to her after armed protesters went to her home.

Earlier the same week in California, Orange County Chief Health Officer Dr. Nichole Quick resigned on June 8 after weeks of criticism and personal threats from residents and other public officials over an order requiring face coverings in public.

In May, before Quick’s resignation, a group of nearly 100 people attended a meeting with county supervisors where they waited hours to speak out against an order requiring face coverings. One person invoked Second Amendment rights to bear arms, while another read Quick’s home address aloud.

RELATED: Majority of 23,000 US nurses surveyed report having to reuse disposable PPE 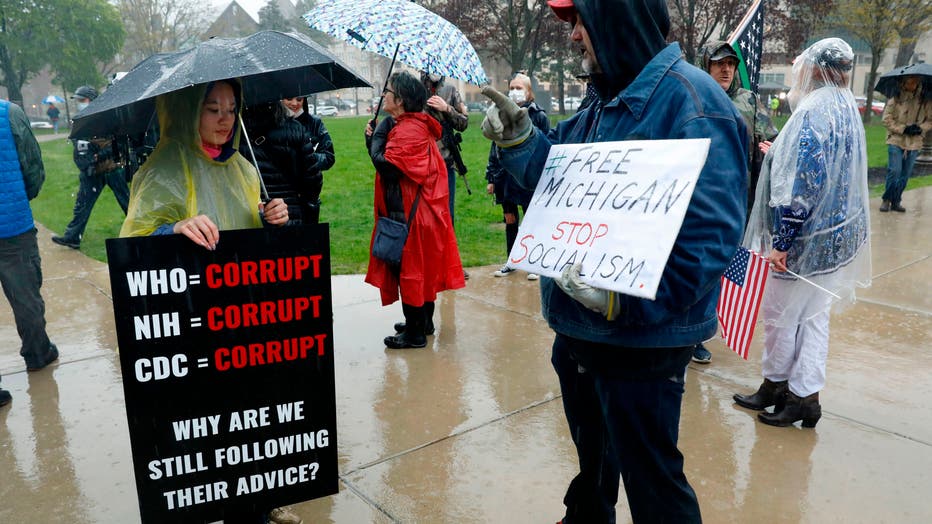 FILE - Demonstrators protest in Lansing, Michigan, during a rally organized by Michigan United for Liberty on May 14, 2020, to protest the coronavirus pandemic stay-at-home orders.

As pressure rises, many more health officials have chosen to leave or been pushed out of their jobs. A review by Kaiser Health News and The Associated Press found that at least 27 state and local health leaders have resigned, retired or been fired since April across 13 states.

From North Carolina to California, they've left their posts due to a mix of backlash and stressful working conditions, all while dealing with chronic staffing and funding shortages. Some health officials haven't been up to the job during the biggest health crisis in a century. Others previously had plans to leave or cited their own health issues.

A recent survey released in May, conducted by National Nurses United (NNU) found that a majority of respondents reported having to reuse personal protective equipment (PPE) intended for one-time use and reported a perceived extreme lack of regard for RN and patient safety by their employers.

National Nurses United, the largest union for registered nurses in the United States, released the survey on May 20 of more than 23,000 nurses, many of whom cited a “complete disregard for worker and public health on the part of health care employers and the government.”

Just before the novel coronavirus outbreak became widespread in March and April, National Nurses United released a survey on Feb. 24 from 4,700 respondents regarding whether or not they felt an adequate plan was in place or if they had enough supplies to deal with a possible widespread outbreak of the virus in the U.S.

Maureen Dugan, a registered nurse of 31 years who serves on the board of directors for the California Nurses Association blamed the "for profit" system of American health care for the general lack of preparation many nurses felt in the face of an outbreak.

RELATED: Nurses worried about lack of plan, protective equipment for potential COVID-19 spread in US

Since the pandemic began, federal public health officials have complained of being sidelined or politicized. The Centers for Disease Control and Prevention has been marginalized, and a government whistleblower said he faced retaliation because he opposed a White House directive to allow widespread access to the malaria drug hydroxychloroquine as a COVID-19 treatment.

In Hawaii, Democratic Rep. Tulsi Gabbard called on the governor to fire his top public health officials, saying they were too slow on testing, contact tracing and travel restrictions. In Wisconsin, several Republican lawmakers demanded the state’s health services secretary resign, and the state’s conservative Supreme Court ruled that she had exceeded her authority by extending a stay-at-home order.

Many local health leaders, accustomed to relative anonymity as they work to protect public health, have been shocked by the threats, said Theresa Anselmo, executive director of the Colorado Association of Local Public Health Officials.

After polling local health directors across the state at a May meeting, Anselmo found about 80% said they or their personal property had been threatened since the pandemic began. About 80% also said they had encountered threats to pull funding from their department or other political pressure.

In Colorado, the Tri-County Health Department, serving Adams, Arapahoe and Douglas counties near Denver, has received hundreds of calls and emails from frustrated citizens, deputy director Jennifer Ludwig said. Some were angry their businesses couldn't open. Others were furious with neighbors who weren't wearing masks outside.

Then rocks were thrown at an office window — three times. The department also received an email calling its members “tyrants,” adding “you’re about to start a hot-shooting… civil war.” Health department workers decamped to another office.