CAPE CANAVERAL, Fla. - After nine years, Americans are back in the business of launching astronauts into space.

Following a weather delay earlier this week, Mother Nature finally allowed NASA and SpaceX to end the longest gap in U.S. spaceflight history Saturday. Douglas Hurley and Robert Behnken lifted off at 3:22 p.m., their Falcon 9 rocket blazing into hazy skies over Kennedy Space Center as thousands of tourists watched from up and down the coast and even President Donald Trump looked on.

The clouds parted just in time for the launch. Forecasters had expected only a 50-percent chance of acceptable conditions, and it looked ominous when storms were building as Hurley and Behnken walked out of the famous doors at KSC’s Operations and Checkout Building and rode in Teslas to the launch pad, then rain pelted the area as they finished getting strapped into the Dragon capsule. 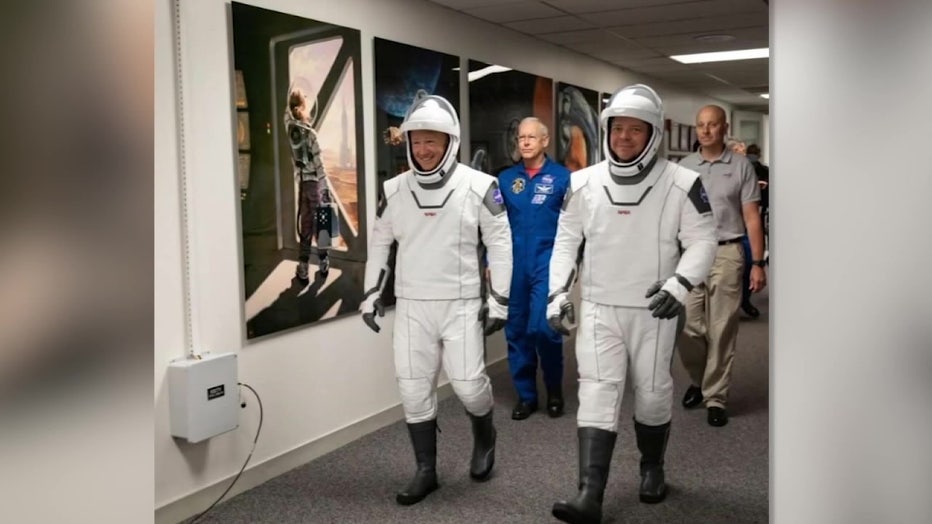 Their initial launch attempt was scrubbed late in the countdown Wednesday because of the possibility of lightning from a nearby thunderstorm, disappointing thousands of tourists who lined the Space Coast’s beaches and bridges. President Trump had flown in aboard Air Force One, landing at the old space shuttle runway. 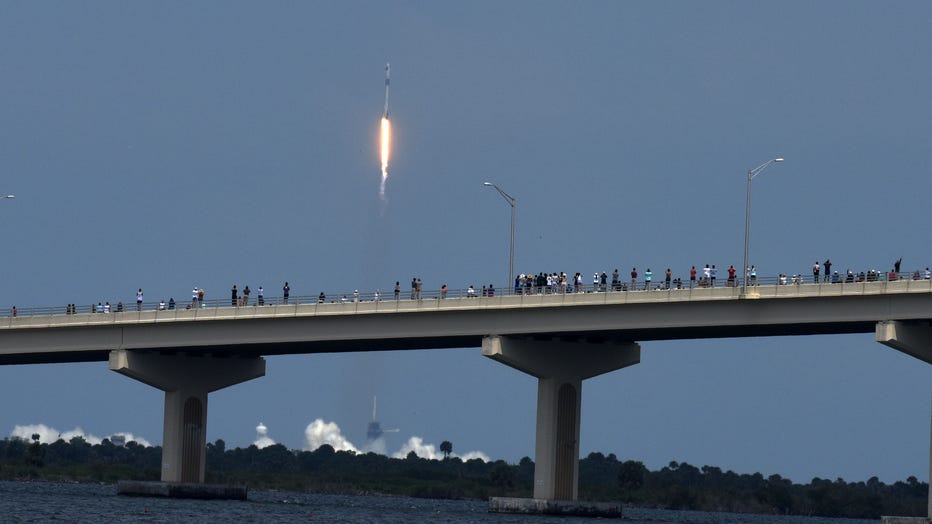 The crowds and the president were back Saturday, and with no technical issues, the combined NASA and SpaceX teams were ready for a break in the clouds. As countdown clocks hit zero, the booster’s nine engines ignited, finally kicking off a new era in U.S. spaceflight.

RELATED: ‘WE DID IT!!!’: Astronauts, proud Americans share their reactions to the 2020 SpaceX launch 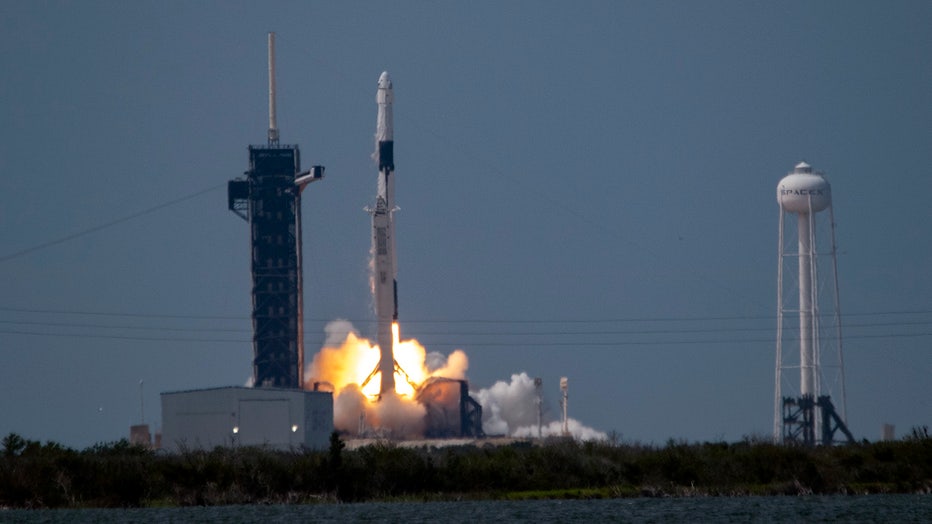 The test flight of the new SpaceX Dragon capsule is the first orbital checkout of a new American spacecraft since the debut of the space shuttle over 39 years ago. It’s also the first time a private company has flown astronauts into orbit.

“They are, in fact, test-pilots. And as test pilots, they will test-fly this spacecraft,” NASA administrator Jim Bridenstine explained before launch.

RELATED: Meet the dinosaur hitching a ride to space with U.S. astronauts 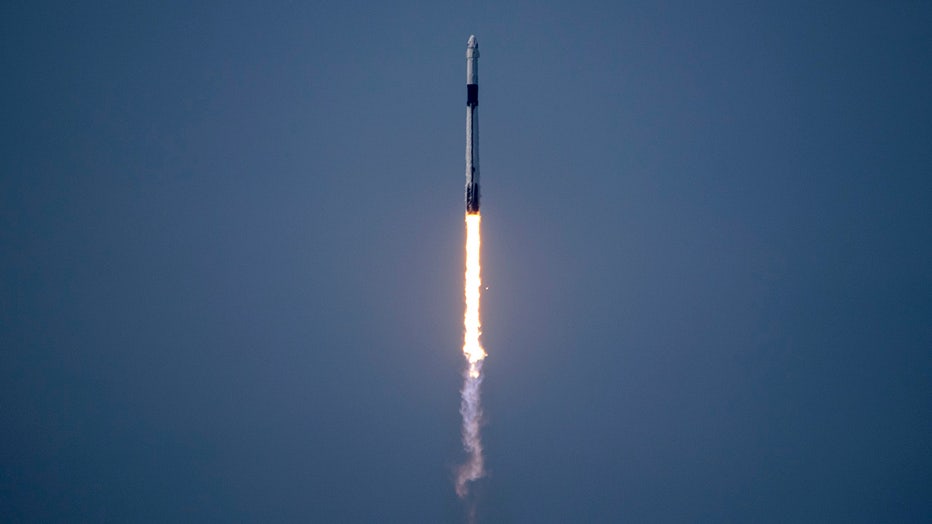 Twelve minutes after the rumbling, crackling lifotff, the men were in orbit, checking out their new craft.

"I've heard that rumble before, but it's a whole different feeling when you've got your own team on that rocket. They are our team. They are America's team," Bridenstine offered.

"The names of Hurley and Behnken will stand in the history books alongside those of legends like Alan Shepard, Gus Grissom, John Young," President Trump said after the launch.

One-on-one with the vice president

If the mission is a success, it will mean NASA can stop paying for seats aboard Russian rockets and instead rely on American companies like SpaceX to ferry astronauts to the space station, just as they have for cargo and supplies.

Hurley, 53, and Behnken, 49, have each flown two shuttle missions and were assigned as two of NASA’s first four commercial crew astronauts in 2015. Hurley is the mission’s commander, while Behnken will hold the new title of joint operations commander.

Both are married to fellow astronauts; Hurley’s spouse is Karen Nyberg, while Behnken is married to Megan McArthur. 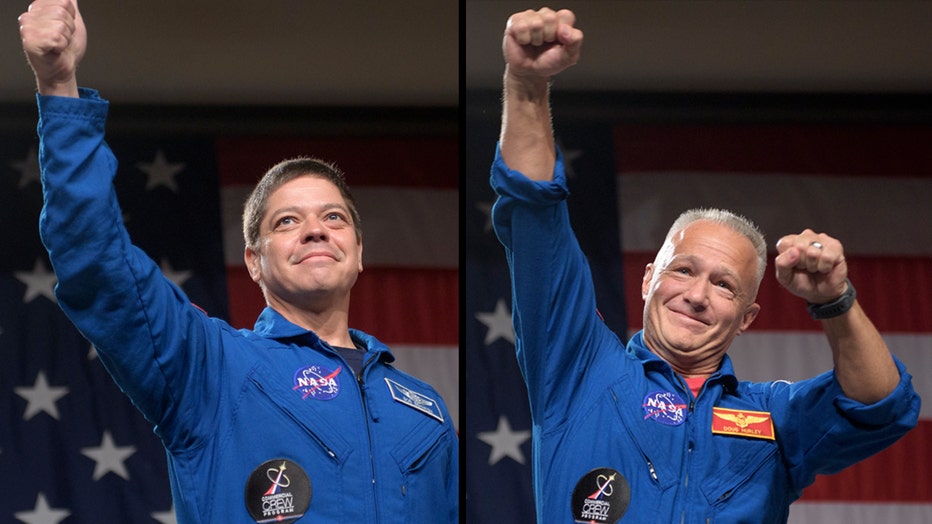 - Born in in St. Ann, Missouri

- Logged 708 hours in space and has spent 37 hours spacewalking

WHAT ARE THEY RIDING 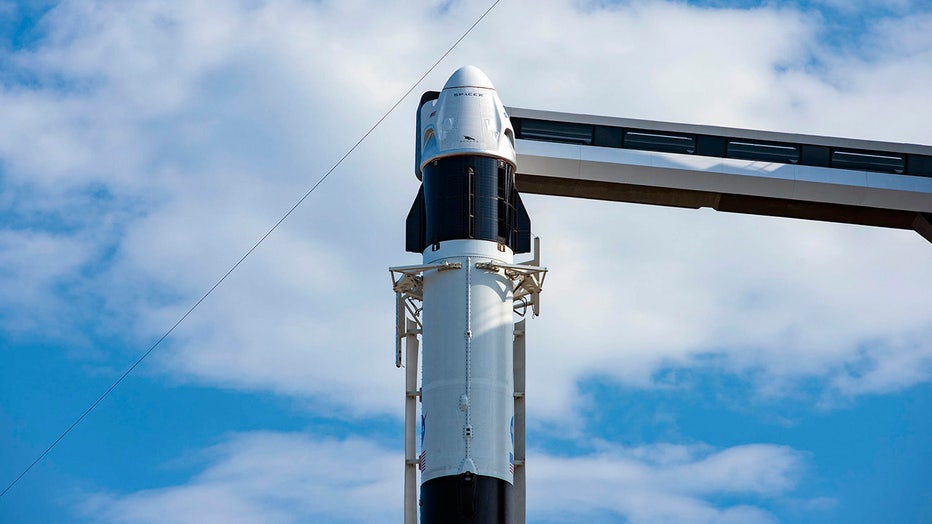 A close look at the Crew Dragon capsule, ready for flight atop its Falcon 9 rocket. SpaceX photo.

The Dragon spacecraft being flown on the Demo-2 mission is the upgraded version of SpaceX’s cargo-ferrying capsules, which have made 20 successful automated flights to and from the International Space Station.

Though the capsule-style spacecraft and splashdowns at sea may seem like a throwback to the space race of the 1960s, the Dragon capsules are significantly upgraded over their Cold War counterparts.

Not only are they larger, with seats for up to seven astronauts, they are reusable. Their gleaming white interiors are decked out with LED lighting and flat-screen displays, looking nothing like the dark grey industrial switch-filled panels that lined the walls of NASA’s first capsules.

The Dragon is hoisted by SpaceX’s Falcon 9 rocket, and while the first-stage booster is reusable, NASA requested a brand-new booster for this mission. In a nod to history, though, SpaceX was given permission to paint NASA”s red “worm” logo on the rocket and spacesuits, the first use of that logo since 1992.

NASA’s astronauts have sported many different looks through the years. From the sleek silver of the Mercury program to the proper white suits of Apollo and even the bright orange of the shuttle days, the flight suits have always made a statement – a blend of fantasy and function.

But while Hurley and Behnken walked out of the same Kennedy Space Center doors that every other astronaut has, they looked a lot different than their predecessors. SpaceX hired Hollywood designer Jose Fernandez to help give the company’s spacesuits a unique look.

The bright white suits match the shiny white interior of the spacecraft, and they are just as sleek. They provide the same level of protection for the astronauts, but add new features like 3D-printed helmets and touchscreen-friendly gloves. 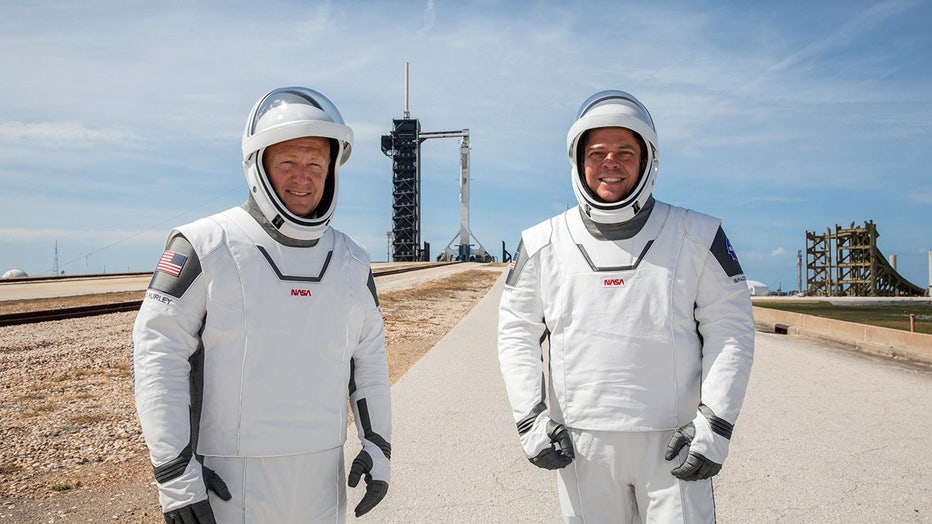 The one-piece suits are custom made for each astronaut, NASA says. A single connection point on each suit’s thigh attaches life support systems, including air and power connections.

And the suits themselves are not the only thing that got a makeover. Two white Teslas made their debut Wednesday, replacing NASA’s silver Astrovan as the astronauts’ ferries to Launch Pad 39A in a not-very-subtle show of SpaceX corporate synergy.

The Dragon capsule will dock with the space station at 10:29 a.m. on Sunday. Then, Hurley and Behnken will spend anywhere from one to four months aboard the station, depending on how the capsule performs.

One highlight of their flight will be taking home a symbolic American flag left behind at the space station by the crew of Atlantis in 2011. That flag, which also flew on the first shuttle mission in 1981, will next be taken to the moon during NASA's Artemis program.

Following their mission, the crew will splash down off the coast of Florida.

If the Demo-2 flight goes well, the next SpaceX crew could fly as soon as August 30, NASA says. But they aren’t the only company developing space taxis; Boeing’s Starliner capsule flew an uncrewed test flight last year that experienced several issues and never made it to the space station.

Boeing plans to refly that test mission before putting astronauts aboard, perhaps later this year.

NASA, meanwhile, will be free to focus on longer-term deep-space missions. The Orion capsule, which flew an uncrewed test mission in 2014, will carry astronauts back to the moon as part of the Artemis program. 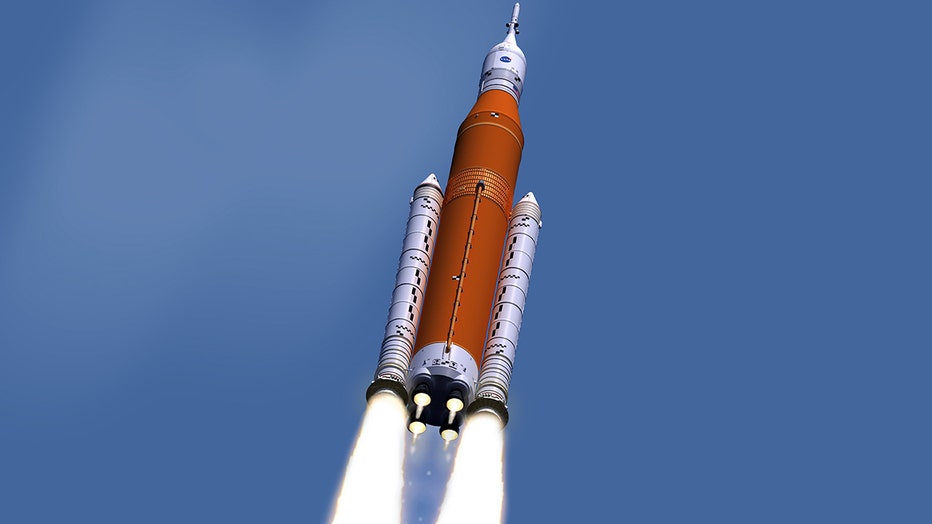 NASA artist's rendition of the Orion capsule atop an SLS rocket.

The agency is developing a large rocket  -- more powerful than the Saturn V moon rocket -- using the space shuttle’s engines and upgraded boosters to launch the elements of a lunar outpost. The first launch could happen in 2021, with a moon landing in 2024. 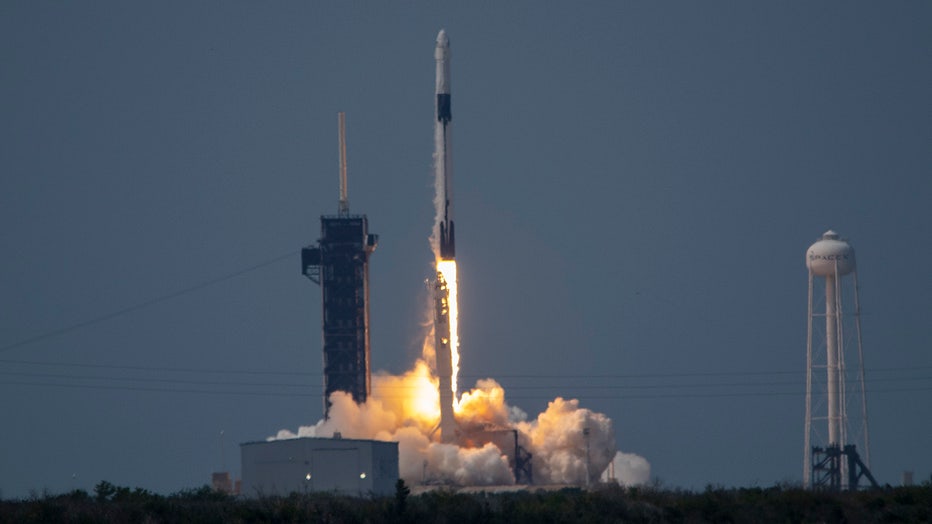 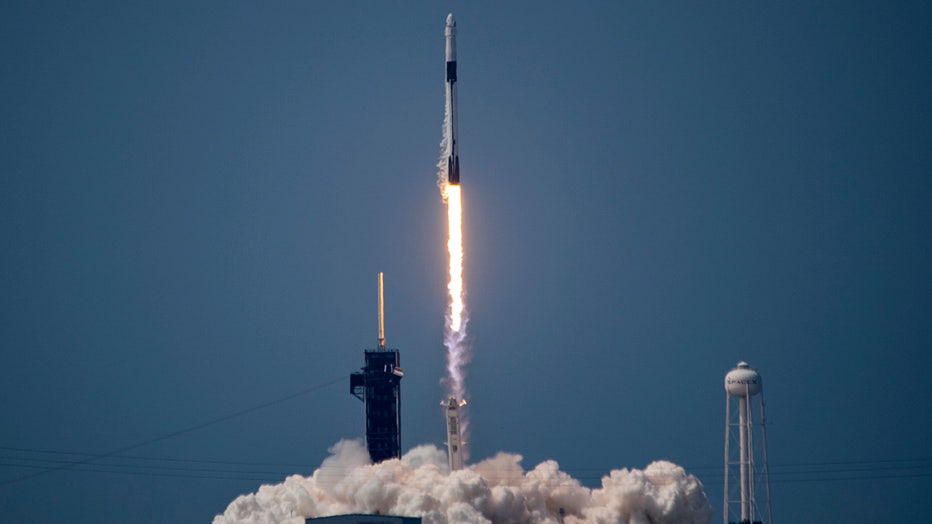 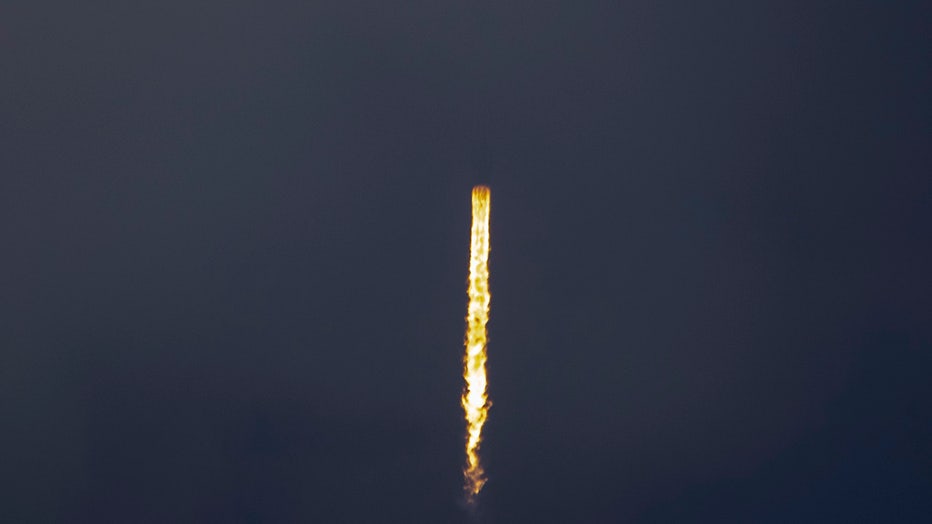 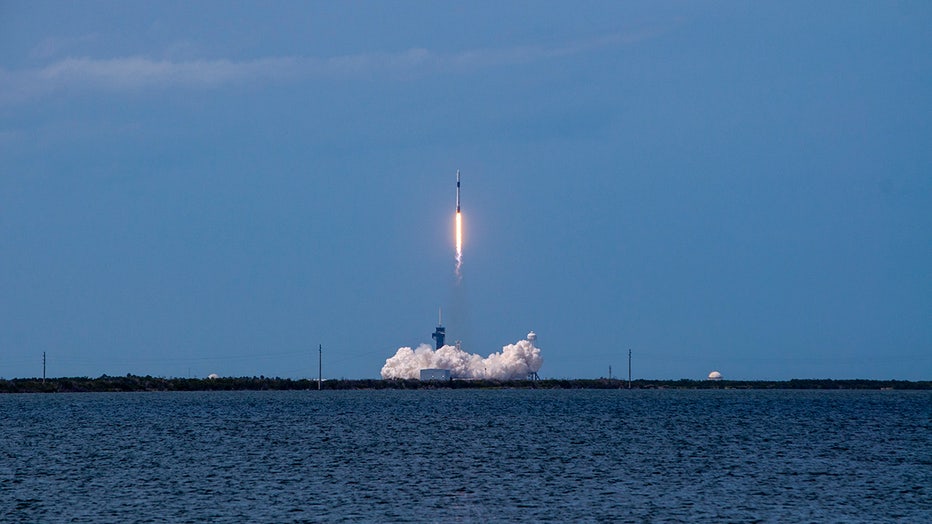 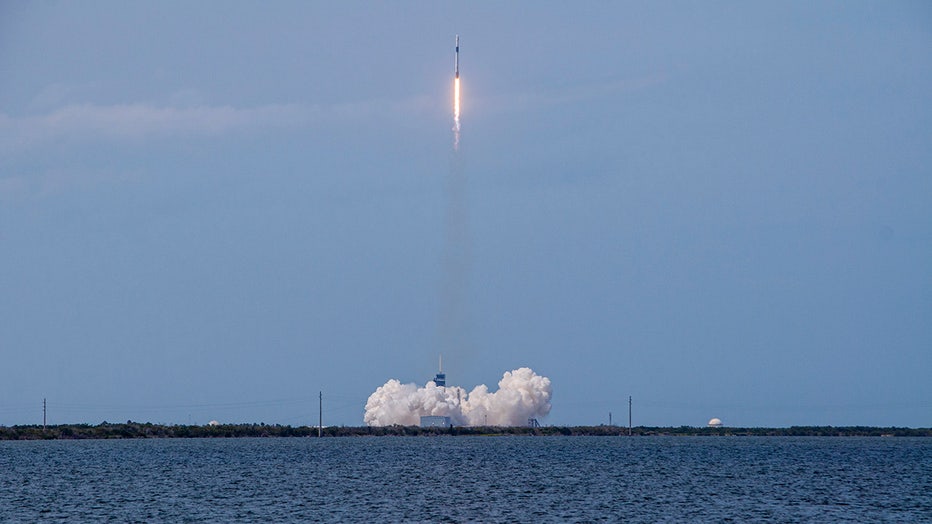 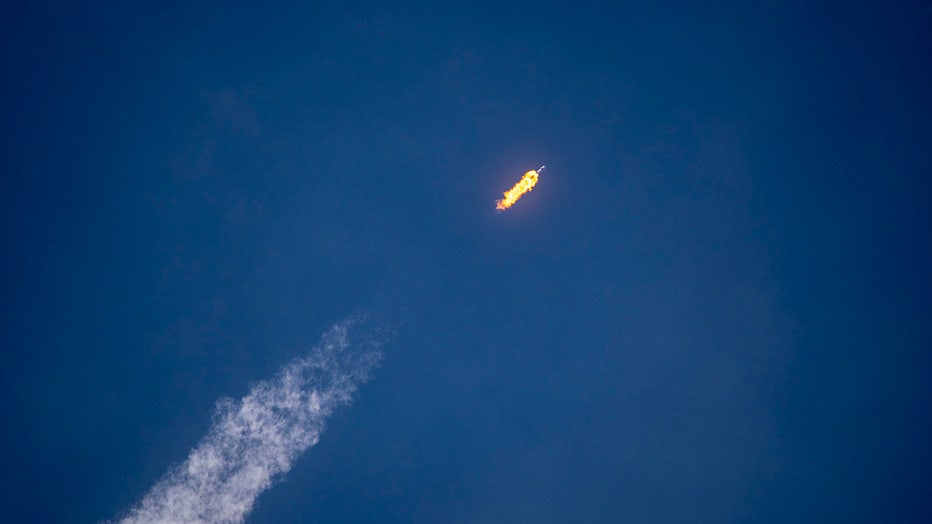 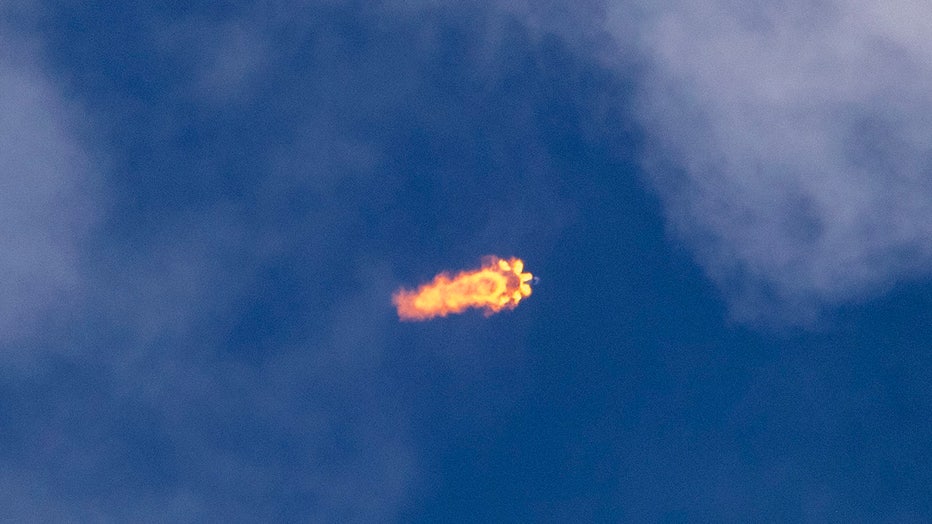