String of car burglaries in Maricopa neighborhood has community on edge

After several car burglaries took place overnight Monday in a Maricopa neighborhood, police say a woman caught on video acting erratically is the person of interest.

MARICOPA, Ariz. - A rash of car burglaries happened overnight in a Maricopa neighborhood, and police are searching for leads on a suspect and person of interest captured on surveillance video.

Four car burglaries have been reported to the Maricopa Police Department as of Mar. 1, all happening on the same block or within minutes of other homes.

So far, police have videos of a woman running through residents' properties in the early morning hours, unnerving residents.

Walber Mancio woke up to find out a stranger trespassed on his property around 4 a.m. 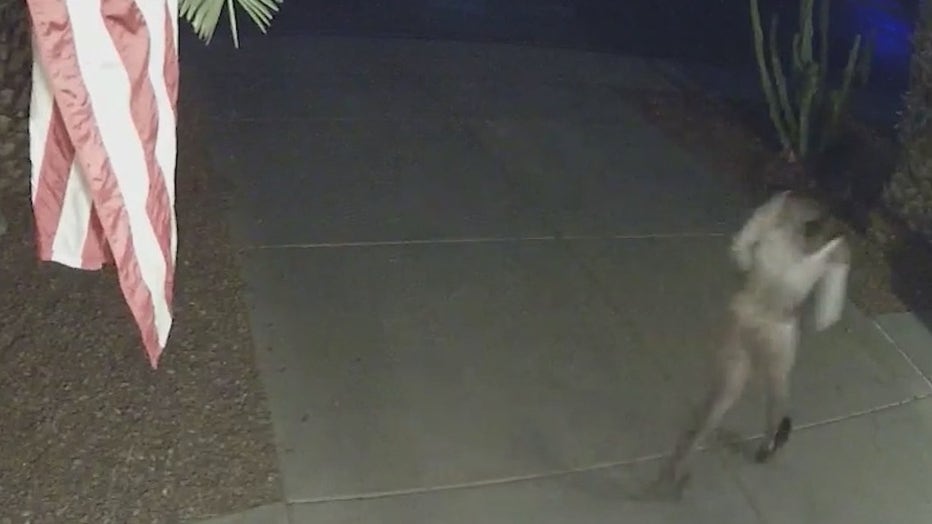 "Like 4:30, I got some texts from my neighbor saying, 'Hey, do you know this girl?' and I said, 'No I don't.' And she was trying to get into our side gate and he got her on his camera, which is on the balcony. She was trying to fiddle with the gate," Mancio said.

In the video, you can see the woman opens the gate before the dogs in the backyard of Mancio's neighbor scares her off.

"Usually it's quiet here nothing like this ever happened before," Mancio said.

She's being called a person of interest by police, wearing a white top and tights, running through the area of North Santa Cruz Drive.  Mancio says someone opened his mom's car door but didn't take anything.

For Nicolette Craig, just two doors down, her car and her husband's car were burglarized with nearly $200 stolen.

"My doors were all shut but I noticed that everything inside of it was completely destroyed," she said, adding, "And for them to hit consecutive houses, it's actually quite scary."

There are other videos in the area showing the person of interest running across the street.

Out of the four car burglaries reported, one victim had a gun stolen from their car. It's unknown if the woman caught on video actually has any connection to the crimes, but because of the timing, police want to know who she is.

"It's a little scary 'cause your sense of security goes away once you realize that you don't have the safety that you thought you had because somebody is going around running around your house," Craig said, adding, " ... to know I'm walking around my house and somebody is outside robbing me at the time I'm here."

For now, neighbors are talking with each other, keeping a close eye on their security footage and locking up their cars.

"Looking around seeing anything suspicious going on, just tell our neighbors and tell the police," Mancio said.

Police are asking anyone who lives in the village's subdivision are asked to check their surveillance cameras and also report anything out of the ordinary to Maricopa Police at 520-568-3673.