Every June, the LGBTQ+ community and allies celebrate Pride Month.

WASHINGTON - U.S. support for same-sex marriage has reached an all-time high at 70%, an increase of 10 percentage points since 2015 when the Supreme Court ruled same-sex couples can marry in all 50 states, according to a new poll released by Gallup.

The current 70% support is the highest since Gallup first began asking the question in 1996 when support for same-sex marriage stood at just 27%. The global public opinion polling company said support has been trending upward over time, reaching a majority level for the first time in 2011.

In 2015, the Supreme Court ruled on the Obergefell v. Hodges case in a narrow 5-4 decision that declared nationwide the right to same-sex marriage. At that time, Gallup said support in the U.S. had reached 60%.

"Since then, the issue has been less prominent in U.S. politics, and public support for same-sex marriage has continued to increase," the company said.

"The latest increase in support among all Americans is driven largely by changes in Republicans' views," the company said. 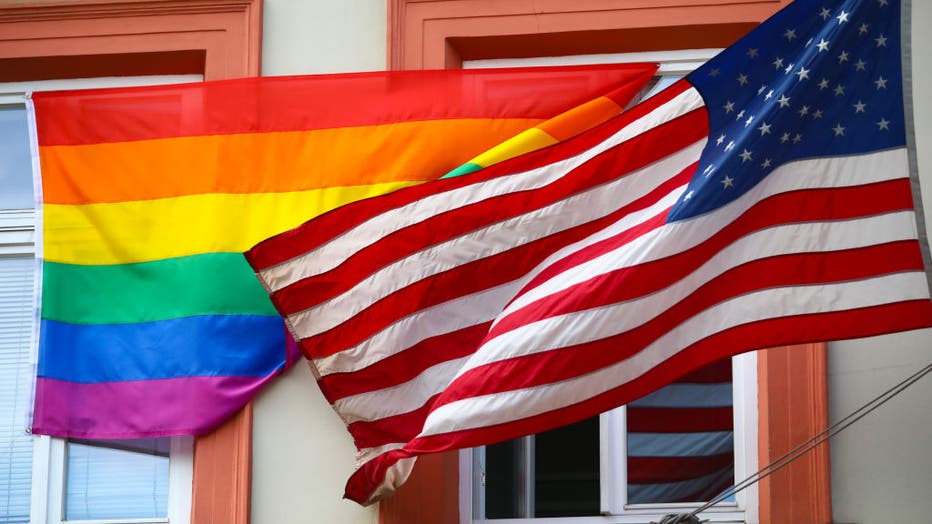 FILE - The LGBTQ pride flag is seen hanging next to the U.S. national flag over the entrance to the U.S. Consulate General in Krakow, Poland on June 2, 2021. (Photo by Beata Zawrzel/NurPhoto via Getty Images)

Democrats, who have been among the biggest supporters of legal same-sex marriage, stood at 83% in 2021. Gallup said this percentage has been on par with the level of support the company has recorded over the past few years, suggesting "that support for gay marriage has reached a ceiling for this group, at least for now."

There are still age differences that remain, though Gallup said age groups across the board are the most supportive they’ve ever been. Currently, 84% of young adults, 72% of middle-aged adults, and 60% of older adults say they support legal same-sex marriage.

"Gallup's trend illustrates that Americans' views can shift in a relatively short time span, creating a new consensus — even as polarization on other measures intensifies," the company concluded.

Gallup's annual Values and Beliefs poll was based on telephone interviews of more than 1,000 adults across the U.S. between May 3 to 18, 2021.

Earlier this year, the company said 5.6% of U.S. adults reported that they identify as LGBT, up from 4.5% in 2017. Within this group, more than half (54.6%) of LGBT adults identified as bisexual, about a quarter said they are gay, 11.7% identified as lesbian, and 11.3% identified as transgender.

An additional 3.3% gave another non-heterosexual preference or term to describe their sexual orientation, such as queer or same-gender-loving, Gallup said.

"One of the main reasons LGBT identification has been increasing over time is that younger generations are far more likely to consider themselves to be something other than heterosexual," the company said in its annual update.

One in six adult members of Generation Z, those between the ages of 18 to 23 in 2020, said they consider themselves to be something other than straight.

RELATED: Celebrate Pride Month 2021 with these LGBTQ movies and shows that are free to stream