SANTA CLARITA, Calif. - At least two students were killed and several others were hospitalized with gunshot wounds following a shooting at Saugus High School in Santa Clarita on Thursday, officials said. The 16-year-old gunman, who carried out the shooting on his birthday, has died from a self-inflicted gunshot wound.

A vigil was held Thursday night for the victims of the Saugus High School shooting in Santa Clarita.

Authorities said surveillance video showed a 16-year-old male student pull a .45 caliber semi-automatic pistol out of his backpack, shot five students in the quad on campus before turning the gun on himself.

The gunman, 16-year-old Nathaniel "Nate" Berhow passed away Friday afternoon from his injuries.

The shooting claimed the lives of 15-year-old Gracie Anne Muehlberger and 14-year-old Dominic Blackwell. Two other girls, ages 14 and 15, and another 14-year-old boy, were transported to area hospitals for their gunshot wounds.

The shooting took 16 seconds and investigators say they still don’t have a motive.

The gun used in the shooting is currently at the sheriff’s crime lab as officials work on finding where the gun originated from. During a press conference Friday afternoon the sheriff’s department as well as the ATF said they recovered six guns that were registered to the suspect’s deceased father. All six have been accounted for and do not match the one used in the attack, Sheriff Villanueva stated. 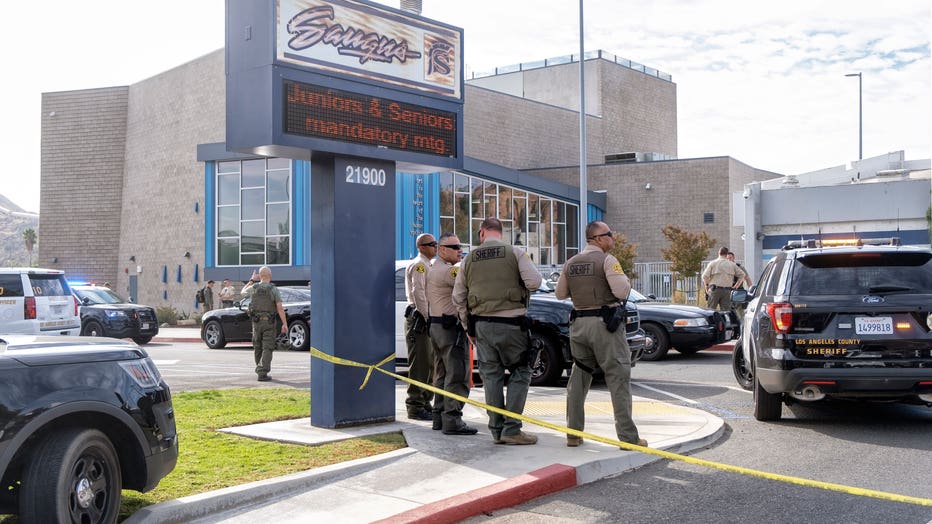 The suspect was identified through video surveillance at the school and first-hand witness accounts. Sheriff Alex Villanueva said the shooter was a student at the school but did not release his name to the public because he is a minor. However, neighbors who lived next door to the suspect and others at Saugus High School identified him to FOX 11 as 16-year-old Nathaniel "Nate" Berhow. 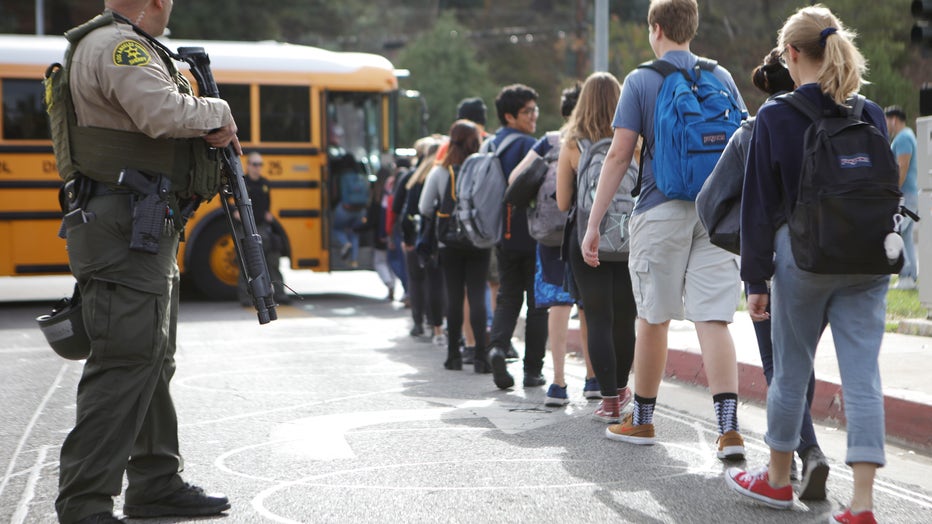 SANTA CLARITA, CALIFORNIA - NOVEMBER 14: Students are evacuated from Saugus High School onto a school bus after a shooting at the school left two students dead and three wounded on November 14, 2019 in Santa Clarita, California. A suspect in the shoo

Deputies with the Santa Clarita Valley Sheriff's Station responded to the school around 7:30 a.m. after receiving reports of shots fired. The school is located at 21900 Centurion Way in Santa Clarita, about 35 miles northwest of downtown Los Angeles.

Related: What we know about the Saugus High School suspected shooter

The school was placed on immediate lockdown and law enforcement officers were working to clear each classroom individually. 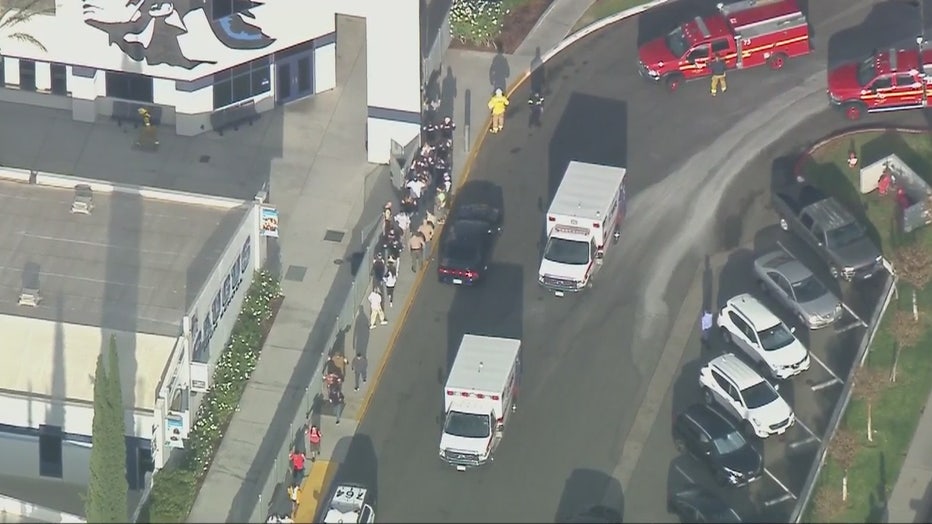 "This is a pretty sobering incident for those involved, including first responders," Los Angeles County Fire Department Chief Daryl Osby said during a news conference, noting that several first responders had children who attended the school.

Every student at Saugus High School was in the process of being interviewed by law enforcement officers before they would be released to their parents. "We need to conduct a thorough investigation. We apologize for the wait," LASD Undersheriff Tim Murakami said in a tweet.

Officials at Henry Mayo Hospital in Valencia said they initially received four patients from Saugus High. One female and one male student succumbed to their injuries at the hospital. A third victim was treated for injuries and released.

The fourth patient transported was the shooting suspect, who remained in critical condition, according to Sheriff Alex Villanueva. 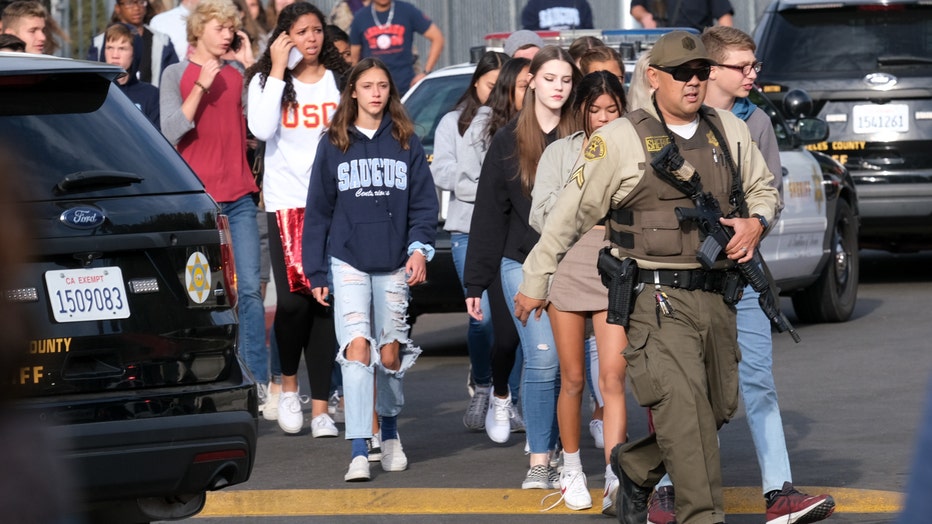 A hospital spokeswoman for Providence Holy Cross Medical Center said that they received two victims from the high school. One was airlifted and the other was transported by ground. Both students were being treated for gunshot wounds, one in good condition and the other in fair condition.

Officials at Olive View Hospital also reported that a 15-year-old female student was transported by ground to their facility for injuries not associated with gunfire. She was expected to be released a short time after she was admitted.

GET LIVE BREAKING NEWS UPDATES ON THIS STORY BY DOWNLOADING THE FOX 11 NEWS APP:

A short time later, all schools in the neighboring Castaic Union School District were placed on lockdown as a precaution. That lockdown was lifted just before 10 a.m.

Central Park on Bouquet Canyon Road in Santa Clarita was being used as a reunification location for parents. The City of Santa Clarita asked the public, "If you do not need to get to Central Park, please avoid the area. Traffic into the park for reunification is jammed, so it will take some time to get through." 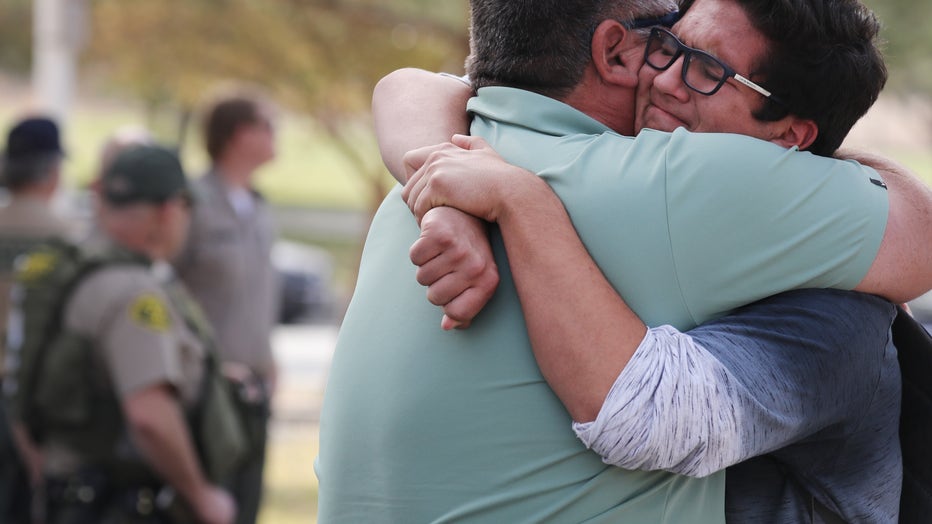 SANTA CLARITA, CALIFORNIA - NOVEMBER 14: Kurt Rennels hugs his son Eric (R) after reuniting at a park near Saugus High School after a shooting at the school left two students dead and three wounded on November 14, 2019 in Santa Clarita, California. A

President Donald Trump reacted to the shooting with a series of tweets saying, "We continue to monitor the terrible events at Saugus High School in Santa Clarita, California through our ongoing communications with Local, State, and Federal Authorities... We send our deepest condolences to the families and friends of those tragically lost, and we pray for the speedy recovery of the wounded."

California Governor Gavin Newsom released the following statement in response to the shooting:

"I am closely monitoring the incident at Saugus High School in Santa Clarita this morning, and my Administration is working in close coordination with local law enforcement. Jennifer and I extend our thoughts to the parents, families and friends of the students and faculty, and the Santa Clarita community."

Vice President Pence addressed the shooting at the beginning of his remarks at a NASA event on Thursday afternoon.

"It's another heartbreaking day for students and parents in America," he said. "In this nation, we mourn with those who mourn, and we grieve with those who grieve. To the families, and to those critically injured, on behalf of the American people, I say from my heart: the hearts of every American are with you today, our prayers are with you, and our prayers are with all the doctors, nurses and hospital staff that are treating your loved ones."

A Disaster Distress Helpline was established to provide 24/7 immediate crisis counseling and support for those affected by the school shooting. The number to call is 1-800-985-5990.

More than 2,300 students attend Saugus High School in grades 9-12, according to the school's website.

Editor's Note: This story has been revised to clarify that only two students succumbed to their injuries.