The Mohave County Sheriff's Office says deputies responded just before 5 a.m. on Aug. 10 to a home near Shipp Drive and Verde Road after three suspects wearing camouflage and face masks reportedly identified themselves as being with the U.S. Marshals Office, demanding to be let into the house.

"The occupants of the residence requested the subjects to show their identification to confirm they were in fact with the Marshal's Office," the Mohave County Sheriff's Office said. "The suspects were unable to show any law enforcement credentials and the residents refused to allow the subjects in."

The suspects then allegedly kicked the door in and were armed with a shotgun, a rifle, two handguns and a baseball bat.

One of the residents was led to a back room by one of the suspects before the other two residents were beaten with the bat by a suspect.

The suspects fled the scene. The victims were taken to a Kingman hospital and are expected to survive.

"The guns, bat, clothing, and masks used during this incident were recovered," the sheriff's office said. 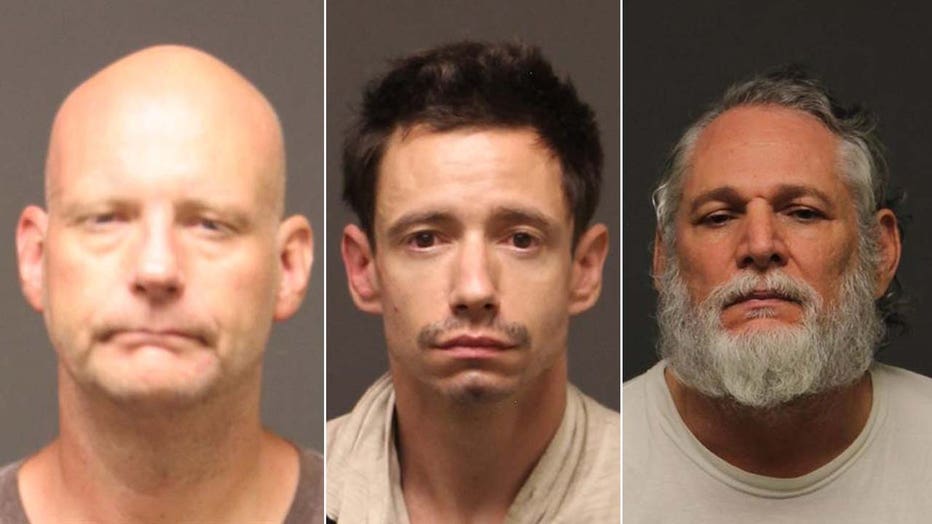 Investigators say Perez had recently been served an order of protection by his estranged wife for domestic violence and was removed from his home a month before the home invasion.

Perez allegedly asked Wortman and Hutchins to help him collect property from his home "under the pretense that his estranged wife's new boyfriend was physically abusing his handicapped son."

"The men armed themselves and drove to the residence," the sheriff's office said. "Once at the home, Perez escorted his adult son to a back room. Perez then came out and began to strike both his estranged wife and her mother with the baseball bat."

Both Wortman and Hutchins stopped Perez from continuing the assault and all three men fled the scene, according to the sheriff's office.

Wortman and Hutchins were arrested and booked into jail for burglary and aggravated assault.

Perez was arrested and booked into a Nevada jail where he awaits extradition back to Arizona. He is also accused of burglary and aggravated assault.