A South Texas couple just got back to the United States with their newly adopted son from Ukraine. They managed to get on one of the last flights out of the country before airlines began canceling service.

DALLAS - A San Antonio couple adopted a boy from Eastern Ukraine, the same area where Russian troops are being deployed.

They almost didn’t get him out of the country in time. The child is very sick. Flights were being cancelled and Americans were being told to evacuate immediately.

Kelci and Theron Jagge talked to FOX 4 from the Texas hospital where their newly adopted son, Ruslan, is now being treated.

The 4-year-old was born with cerebral palsy and has spent his whole life in an orphanage.

The Jagge’s adoption story started more than a year ago. Kelci saw Ruslan’s photo on Instagram and fell in love immediately.

"We saw his picture before we even decided to adopt," she said. "We were like, ‘The time is now. There’s no better time."

But when it came time to finalize the adoption and pick Ruslan up in Ukraine, the Jagges learned the trip would be difficult. Word of possible war had taken over the country.

Ruslan’s orphanage was in the part of Eastern Ukraine that Russian President Vladimir Putin just declared independent and where he’s ordered troops to deploy. 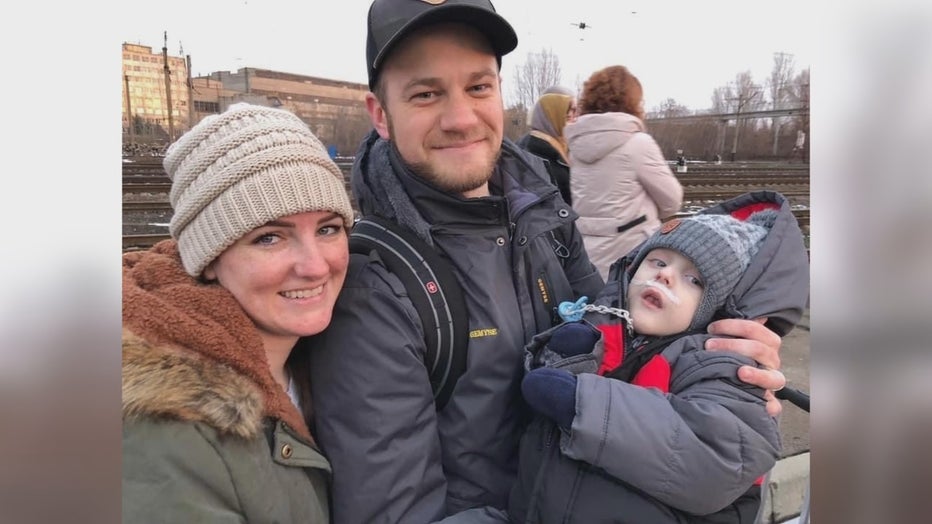 When the Jagges got there, Russian troops were building up along the country’s border and Americans were being told to evacuate.

They started getting emails from the embassy urging them to leave and at the same time, Ruslan was battling pneumonia.

"We were racing against time at this point," Theron said. "We were not able to get a visa for him finalized until after hours the Friday before the embassy was evacuated. So, he got the last visa that the embassy issued before the evacuation."

They tried to get Ruslan’s visa fast-tracked and thought they succeeded but they were stopped at the airport. They were told his papers weren’t valid.

With word that an invasion was imminent and flights out of Ukraine being canceled, the Jagges hired an attorney. It was a success.

A few days later, they were able to leave. The family’s nurse and the nonprofit she works for found them a flight home.

"It was all the Lord. It was all God," Theron said. "Little things happened along the way that opened up the doors to get us home."

Since the Jagges’ plane touched down back home in San Antonio last week, they’ve spent sleepless nights by Ruslan’s bedside in the ICU.

The couple also can’t help but to think of the children still in his orphanage with unpredictable days ahead.

"I know a lot of people look at us like, ‘Why are you going there? You are crazy.’ Well, if that’s your child and your child was stranded in a war zone you would do anything to get them out," Kelci said.

Ruslan’s orphanage had to be evacuated when Russia invaded and took Crimea back in 2014. They are waiting to hear if they’ll be evacuated again.