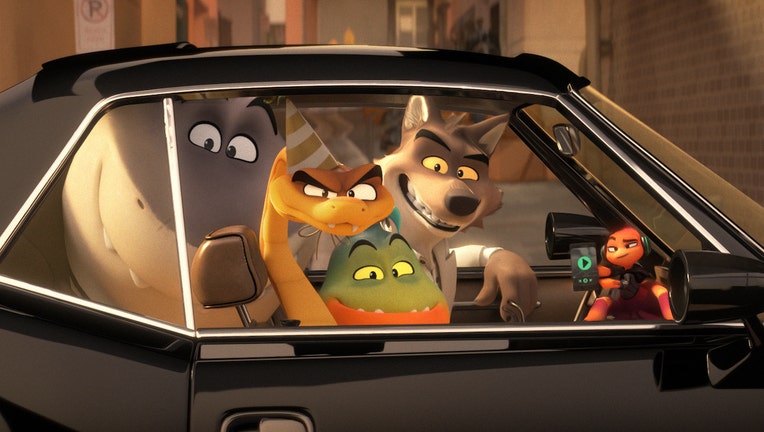 CHICAGO - Editor's note: This review originally ran on April 22, 2022 as "The Bad Guys" hit theaters. It has been republished in light of the film's success on Netflix.

Mix one part "Zootopia" with two parts "Ocean’s Eleven" and just a dash of the visual flair of "Spider-Man: Into The Spider-Verse" and you’ve got "The Bad Guys," the new animated caper from DreamWorks. Based on a book series by Australian author Aaron Blabey, "The Bad Guys" anchors its story around a pack of career criminals who consider their lack of moral scruples a point of pride. But considering how sweet these bad guys are with one another, is there a chance they might have a good side after all.

Indeed, much in the same way "Paddington 2" used its family movie charms to lightly touch on themes of prison reform, "The Bad Guys" has a thematic interest in restorative justice: What are the social forces that shape someone to go bad? And what if instead of just locking them away, we offered them a path towards transformation and rehabilitation?

RELATED: Free family movie night: ‘The Secret of NIMH’ is creepy and captivating

While a truly great version of this material would have pushed those themes even further, "The Bad Guys" mostly keeps things on the lighter, sillier side of the kids movie spectrum. Still, that touch of thematic depth helps elevate a fun family film that zips along on stylish, fast-paced heist movie irreverence and some welcome visual originality. This is DreamWorks animation as filtered through the lens of a Guy Ritchie or Quentin Tarantino action movie. And that proves to be a winningly slick combo.

About "The Bad Guys": So you're a tough guy, just can't get enough guy 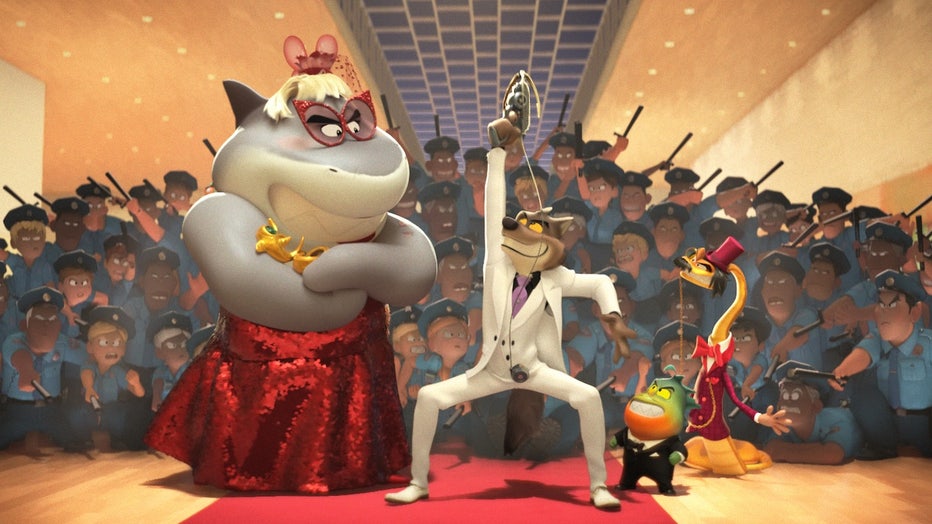 RELATED: ‘The School for Good and Evil’ is a hit on Netflix - but is it any good?

As first-time feature director Pierre Perifel establishes in a "Pulp Fiction"-inspired opening sequence, the reputation of the Bad Guys precedes them. When people cower in fear at the very sight of the Big Bad Wolf, bank robbing is a breeze. But did the crew members earn their "bad guy" moniker because of their infamous heists? Or did they only go into a life of crime because the world already saw them as bad?

The film puts that question to the test during a heist-gone-wrong, where Mr. Wolf talks the crew out of jail time by suggesting the Bad Guys deserve a chance at redemption under the tutelage of Professor Marmalade (Richard Ayoade), a self-important philanthropist guinea pig. And though Wolf secretly reassures his friends this is all just part of a long con, the "tingle of goodness" might be more addictive than he expects. 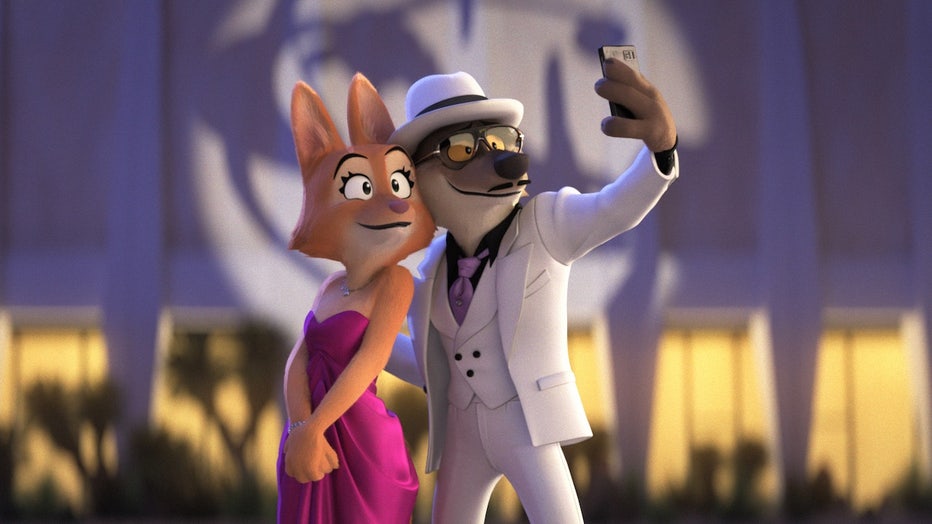 There’s an emotional core beneath the fast-and-loose jokes in "The Bad Guys," thanks in large part to Rockwell’s soulful voice performance. He sells Mr. Wolf as both a dashing career criminal and a vulnerable guy with hidden hopes and dreams. And that brings a dose of heart to the movie, whether Wolf is bantering with his old buddy Snake, flirting with self-possessed Governor Diane Foxington (Zazie Beetz) or gently rescuing a cat from a tree.

WATCH FREE ON TUBI: Two seasons of "Scooby-Doo Where Are You?" — get the app

See ‘The Bad Guys’ for: A new look from DreamWorks

The other big calling card for "The Bad Guys" is its stylized look championed by animator-turned-director Perifel. Following in the footsteps of recent off-the-beaten-path animated films like "Spider-Man: Into The Spider-Verse" and "The Mitchells vs. the Machines," "The Bad Guys" challenges the CG style that's become the default for kids entertainment. Instead, Perifel pulls in elements of traditional hand-drawn animation to give his world a whole new sense of depth and perspective. 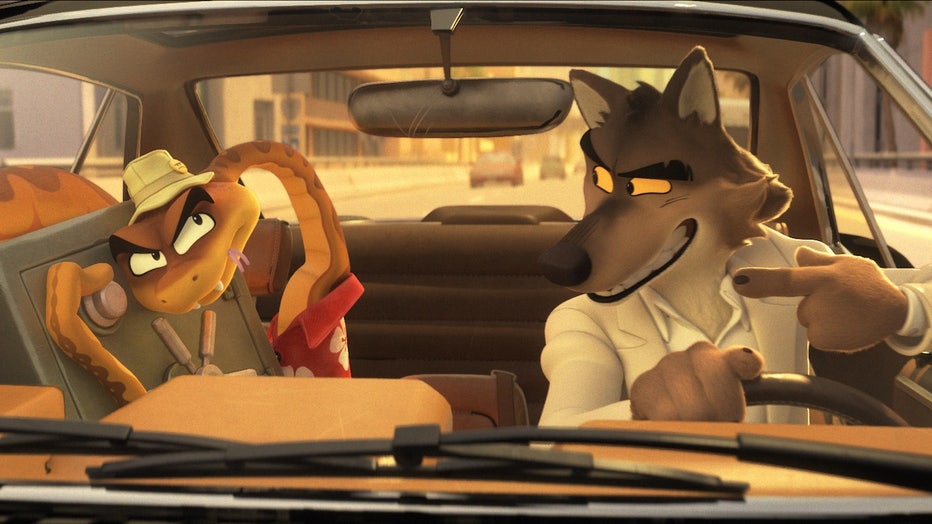 For instance, while the characters’ bodies are 3D, their eyes have an old-school 2D look that harkens back to Hanna-Barbera or "Looney Tunes" cartoons. The action sequences, meanwhile, are inspired as much by the kineticism of Japanese anime as by live-action crime capers. And though the whole film is animated, its mix of anthropomorphized animals and regular human characters calls to mind the mixed media effect of "Who Framed Roger Rabbit" — all touches that give the film a pleasing original aesthetic that complements the more familiar beats of its baddies-turn-good story.

WATCH FREE ON TUBI: The animated classic "The Iron Giant" — get the app

Indeed, "The Bad Guys" ultimately becomes a little too enamored with action movie tropes in its second half, sacrificing the depth of its emotional themes for more rote, plot-heavy incident. (Of the Bad Guys crew, only Wolf and Snake feel like fully developed characters.) Still, it’s refreshing to see a project push animation in new directions rather than just resting on the genre’s CG laurels. If "The Bad Guys" doesn’t enter the top tier of the animated echelon, it’s still a fun time at the movies — and a strong calling card for Perifel as an animation director to watch.

Make it a double feature with "The Secret of NIMH," streaming free on Tubi

The Secret of NIMH (1982): Animal testing, a brutal struggle between rival rat factions, a widowed mom with a sick kid and a potentially lethal housing crisis, plus an extremely creepy owl voiced by legendary character actor John Carradine, all in a movie somewhat inexplicably rated G. It's difficult to know what kids accustomed to the fast-paced digital animation of the 21st century will make of the hand-drawn "NIMH" — though anyone with an appreciation for the classic Disney cartoons might see how it fits just to the side of the Disney canon. In some ways, the movies Don Bluth made in the 1980s, including "NIMH," "An American Tail" and "The Land Before Time," feel like an alternate history of Disney: Here’s what those animators might have gotten up to if they hadn’t been floundering for much of the decade. Read the rest of film critic Jesse Hassenger's retrospective. Rated G. 82 minutes. Dir: Don Bluth. Featuring: Elizabeth Hartman, Dom DeLuise, Peter Strauss, Arthur Malet, Derek Jacobi, Paul Shenar, John Carradine, Hermione Baddeley, Shannen Doherty, Wil Wheaton, Ina Fried.

Where is "The Bad Guys" streaming?

"The Bad Guys" is currently streaming on Netflix. Plans start at $9.99 a month; higher tiers include better quality video and the ability to stream on multiple devices simultaneously. "The Bad Guys" is also available to rent via places like Redbox, Apple TV, Vudu and Amazon’s Prime Video.