Tik Tok is a short-form video app that allows users to create and share fun content with added filters, music, animation and more.

LOS ANGELES - TikTok has enlisted some of the top animation creators on its platform to share ways they spread kindness online as part of a new campaign aimed at tackling the issue of bullying.

The campaign called #CreateKindness includes a video series raising awareness about the many ways online bullying can occur and how users can better navigate some of these issues. TikTok said it aims to cultivate "an inclusive atmosphere," and that bullying behavior "damages the trust-based nature of the app by harming people's confidence in themselves."

Some of the app’s most-followed creators, including King Science with 11.6 million followers, made animated videos that offer perspectives on the root causes of bullying online and how to overcome negative comments by focusing on the positive ones. The campaign also features videos by milkymichii, Recokh, Kelly Emmrich, AmyRightMeow and Rosie.gif.

In a video titled "What We Don't See", King Science encourages people to treat others with compassion and to "remember that you never know what someone is going through."

Another video, called "Power of Words" by Rosie.gif, highlights the impact words can have on a person and implores users to consider their comments before they post.

AmyRightMeow, who has more than 911,000 followers on the platform, gives advice in a video called "Walk Away" on dealing with negative comments — suggesting that users block or simply ignore them as a way to continue creating and using the platform happily.

"By using their distinctive animation styles and voices, and revealing themselves at the end of the videos, these creators drive home an important message: behind every account is a real human being who deserves to be treated with kindness and respect," TikTok said in a news release. 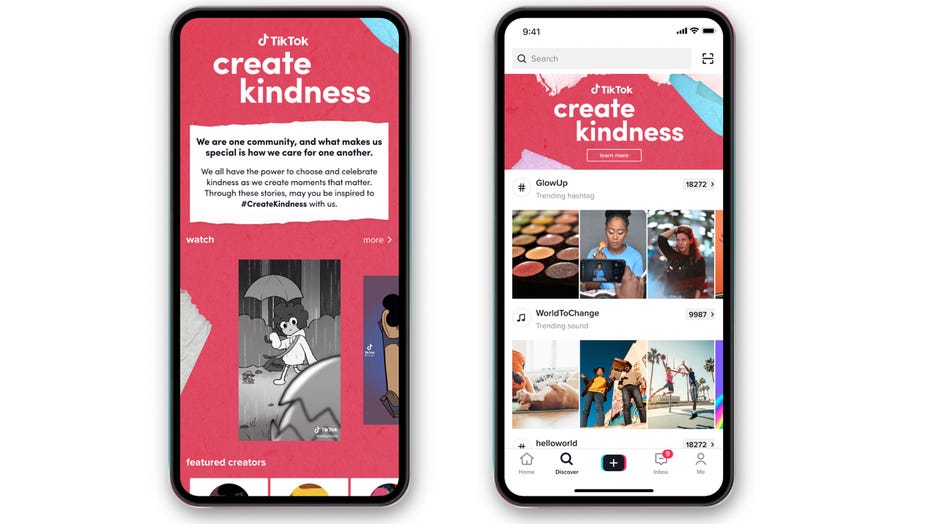 TikTok launched an anti-bullying campaign called #CreateKindness and is sharing videos made by some of its top animation creators. (Photo credit: TikTok)

The videos will live on TikTok’s Discover page throughout the month and on the account @TikTokTips. The company is also encouraging users to participate in the #CreateKindness campaign by creating videos that inspire people to spread kindness.

The company has introduced a range of features aimed at preventing harassment and bullying on the platform, including the ability to filter and review comments before they appear and a pop-up that asks people to reconsider posting unkind or inappropriate comments.

TikTok added that "it’s critically important to continue cultivating an atmosphere where everyone feels safe and welcome to create and share authentically. Bullying is not tolerated on TikTok."

TikTok, which is owned by the Chinese company ByteDance and runs its U.S. operations out of Culver City, California, was the target of former President Donald Trump last year.

Trump sought to ban the Chinese-owned TikTok from smartphone app stores in the U.S., citing a security threat because the Chinese government could spy on app users’ personal data. But on Wednesday, the Biden administration dropped the Trump-era executive orders that attempted to ban both TikTok and WeChat and said it would conduct its own review aimed at identifying national security risks.

Last year, the Trump administration also brokered a deal that would have had U.S. corporations Oracle and Walmart take a large stake in the app owned by ByteDance on national security grounds. But the proposed U.S. takeover of TikTok remains in limbo.

The unusual arrangement stemmed from an executive order under Trump that aimed to ban TikTok in the U.S. unless it accepted a greater degree of American control.