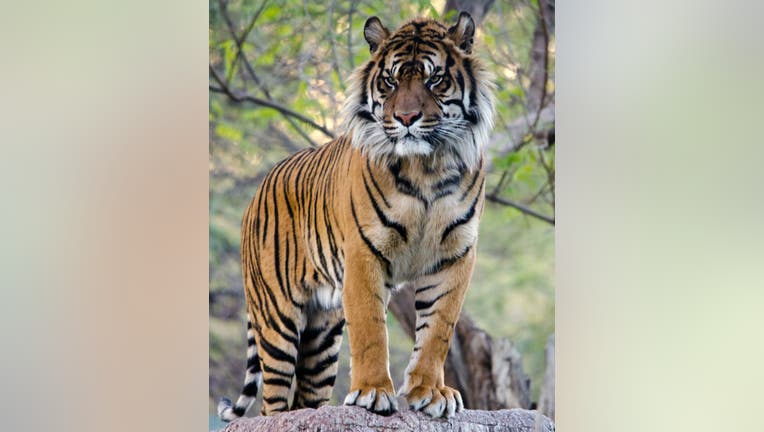 A 17-year-old Phoenix Zoo resident, a Sumatran tiger named Jai, sadly passed away after his battle with kidney failure, the zoo announced on Feb. 2.

PHOENIX - A 17-year-old Phoenix Zoo resident, a Sumatran tiger named Jai, sadly passed away after his battle with kidney failure, the zoo announced on Feb. 2.

"Zoo veterinarians had been aware of elevated renal values from previous exams, but Jai recently became clinically affected by the disease," the statement read, in part.

Jai arrived at the zoo in 2005 from the Louisville Zoo and Kara Schilling, Curator of Mammals for the Phoenix Zoo, said, "He has been a tremendous ambassador for his wild counterparts and our team has enjoyed every minute we’ve had the pleasure of caring for him."

As for his illness, the zoo explained, "Chronic kidney disease is common in domestic and non-domestic cat species and can form over a period of months or years. A study in Australian zoos in 2018 showed that Sumatran tigers had the highest percentage of deaths related to kidney disease (75%) among the various species of cats in zoos. Kidney disease is one of the most common causes of death in tigers."

His roars, grumbles and how he impatiently waited for his meals are what his keepers will miss, along with him being very vocal. "He was a very vocal cat who always made his viewpoints known. He will be greatly missed!" Schilling said.

The decision to euthanize Jai was a hard one, but it was necessary to keep him from suffering.

"We made the difficult decision as an animal care team when we felt his quality of life was severely impacted," says Dr. Gary West, Senior Vice President of Animal Health and Living Collections. "Ultimately, because it requires anesthesia to give him supportive care and fluid therapy, we decided that we would not continue to do that. The team decided that when his appetite greatly decreased, and his activity level declined we would proceed with euthanasia."

The median life expectancy for Sumatran tigers is 18.4 years of age.

The zoo said on Instagram that Sumatran tiger, Joanne, is at the zoo, and that she is just fine on her own. "Tigers are solitary in the wild and only come together for breeding. Joanne can be seen in 'Isle of the Tiger' on the Zoo’s Tropics Trail," the post read.