Former President Donald Trump and New England Patriots owner Robert Kraft were accused in a new report Wednesday of trying to influence the investigation into the team’s 2007 Spygate scandal.

The NFL determined the Patriots were guilty of videotaping the New York Jets’ defensive coaches signals from a prohibited location during a Sept. 9, 2007 game. The league fined Patriots head coach Bill Belichick $500,000, the Patriots $200,000 and took away a 2008 first-round draft pick.

Specter raised an issue with NFL Commissioner Roger Goodell at the time over the tapes being destroyed and wondered if there was a connection between the tapes and the Super Bowl win over the Philadelphia Eagles in 2005.

The Spygate case would eventually fizzle out. The Patriots would win three more Super Bowls and help prop up Tom Brady as the greatest quarterback in NFL history and the Patriots as the most dominant sports franchise at the start of the 21st century.

An ESPN report on Wednesday alleged that Trump "dangled campaign cash" for Specter in exchange for the investigation to go away. Trump reportedly told Specter he was acting on Kraft’s behalf.

Fox News did not immediately hear back from the Patriots, Trump or Shanin Specter on a request for comment.

Robbins confirmed to Fox News the comments made to ESPN. 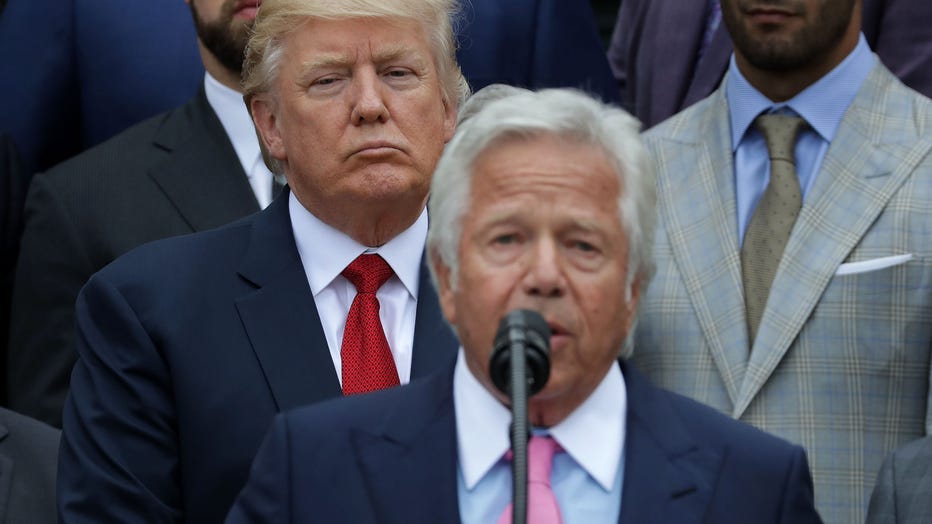 Specter’s son Shanin and Charles Robbins – a former communications aide for Specter who also co-authored their books – talked to ESPN about the late senator’s involvement with the scandal and the alleged involvement of Trump.

According to ESPN, Robbins and Specter spoke about a then-upcoming book "Life Among the Cannibals," which published in 2012, and tape-recorded their conversation. Specter reportedly told Robbins a "mutual friend" told him if he laid off the Patriots his pocket would be lined and that the "friend" acted on behalf of Kraft. The friend wasn’t revealed in the conversation or published in the book.

Robbins told ESPN in 2017 "the friend" may have been Trump, who at that time had just stepped into the Oval Office as president, and that he never pressed Specter on it. Trump had previously cut Specter’s campaign a check for $1,000 in 1983, according to the report. Trump had also publicly called him a friend. Shanin Specter had spoken to ESPN previously about the "mutual friend" but wasn’t sure on the name until now.

Shanin Specter said his father was angry over it. He said his re-telling of the ordeal now isn’t politically motivated despite his support for President Joe Biden and he didn’t report the allegations because he didn’t think, citing case law, it would be considered a bribe.

Records showed that neither Kraft nor his company Kraft Group donated to Specter.

Jason Miller, a senior adviser to Trump, denied the allegations in the ESPN report.

"This is completely false. We have no idea what you're talking about," he told the outlet.

Kraft also denied allegations to ESPN through a spokesman: "Mr. Kraft is not aware of any involvement of Trump on this topic and he did not have any other engagement with Specter or his staff."