WASHINGTON - President Donald Trump tweeted a video after making no public appearances since a mob of his supporters violently laid siege to the U.S. Capitol.

Despite previously calling the protesters "special" in a video that he tweeted amid the riot Wednesday, Trump denounced their actions in the new video posted Thursday, saying the rioters "defiled the seat of American democracy."

"To those who engage in the acts of violence and destruction, you do not represent our country, and to those who broke the law, you will pay," Trump said.

Trump said "we must get on with the business of America," and said while he greatly contested the results of the 2020 election, he recognized the certification of Biden’s election win.

Trump, for the first time, verbally acknowledged that "a new administration will be inaugurated" on Jan. 20. "My focus now turns to ensuring a smooth orderly and seamless transition of power," Trump said.

In the video, Trump claimed he "immediately" deployed the National Guard to support local law enforcement and quell the unrest, but a statement by Acting Defense Secretary Christopher Miller did not mention Trump’s involvement.

On Wednesday amid the pro-Trump riot at the U.S. Capitol, White House Press Secretary Kayleigh McEnany tweeted that the National Guard was on the way along with other federal protective services at Trump's direction, but it was not clear that Trump himself gave the order.

Miller said in his statement, "Chairman Milley and I just spoke separately with the Vice President and with Speaker Pelosi, Leader McConnell, Senator Schumer and Representative Hoyer about the situation at the U.S. Capitol. We have fully activated the D.C. National Guard to assist federal and local law enforcement as they work to peacefully address the situation. We are prepared to provide additional support as necessary and appropriate as requested by local authorities. Our people are sworn to defend the constitution and our democratic form of government and they will act accordingly."

On Wednesday, pro-Trump rioters stormed the U.S. Capitol and unleashed unprecedented scenes of mayhem, temporarily halting Congress’ attempt to count the Electoral College votes in order to certify the victory of President-elect Joe Biden in the 2020 election.

Moments after Biden’s victory was certified by a joint session of Congress Wednesday, Trump for the first time acknowledged his defeat in the Nov. 3 election in a statement tweeted by a White House communications aide and announced there would be an "orderly transition" on Jan. 20, Inauguration Day.

But earlier on Wednesday when violent Trump supporters breached through barricades and into the Capitol, Trump spent much of that day watching the insurrection on television from his private dining room off the Oval Office. But aside from sparing appeals for calm issued at the insistence of his staff, he was largely disengaged. 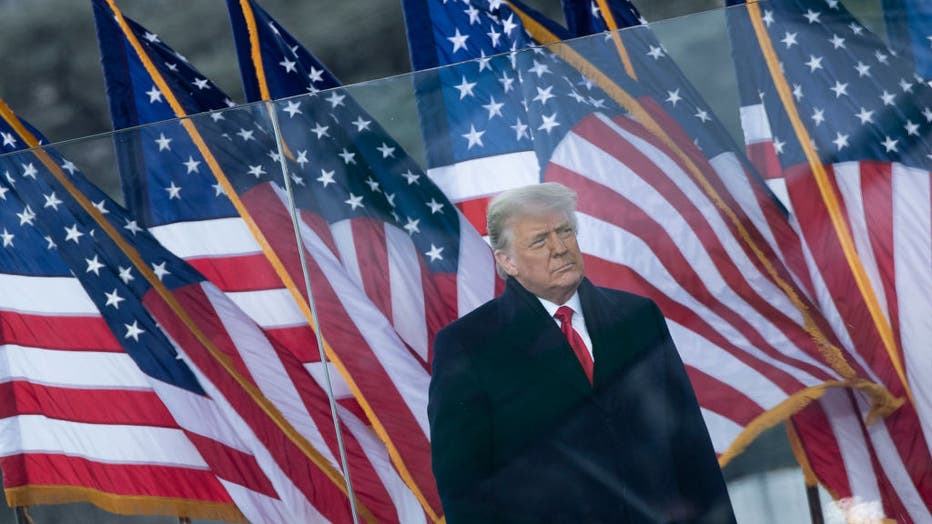 US President Donald Trump speaks to supporters from The Ellipse near the White House on January 6, 2021, in Washington, DC.

Trump only reluctantly issued the tweets and taped a video encouraging an end to the violence. The posts came at the insistence of staff and amid mounting criticism from Republican lawmakers begging him to condemn the violence and tell his supporters to stand down, according to the official.

Even as authorities struggled to take control of Capitol Hill after protesters overwhelmed police, Trump continued to level baseless allegations of mass voter fraud and praised his loyalists as "very special."

"I know your pain. I know your hurt. But you have to go home now," he said in a video posted more than 90 minutes after lawmakers were evacuated from the House and Senate chambers. "We can’t play into the hands of these people. We have to have peace. So go home. We love you. You’re very special."

The violence that left one woman shot and killed was the culmination of months of rhetoric from Trump attempting to sow mistrust in the integrity of the 2020 election.

The president had spent the past two months refusing to concede and making baseless allegations of widespread voter fraud, even though his own Justice Department, federal courts, including the Supreme Court, and state governments have said repeatedly the vote was carried out freely and fairly.

After nearly four hours of violent riots, officials were able to get things under control and secure the Capitol.

What followed was a slew of condemnation by political figures and lawmakers, both Democratic and Republican and even the resignation of high ranking Trump administration officials.

Transportation Secretary Elaine Chao on Thursday became the highest ranking member of Trump’s administration to resign in protest after the pro-Trump insurrection at the Capitol.

In a statement, Chao, who is married to Senate GOP leader Mitch McConnell, said the attack "has deeply troubled me in a way that I simply cannot set aside."

Mick Mulvaney, Trump’s former chief of staff-turned-special envoy to Northern Ireland told CNBC Thursday that he had called Secretary of State Mike Pompeo "to let him know I was resigning. ... I can’t do it. I can’t stay."