A mass shooting is defined by "a minimum of four victims shot, either injured or killed, not including any shooter who may also have been killed or injured in the incident," according to the Gun Violence Archive. There were a total of 198 mass shootings across the United States between Jan. 1 and May 11, the data showed.

After a year of sheltering in place and lockdowns due to the COVID-19 pandemic, mass shootings seem to be back and plaguing headlines. For many, the fear of contracting an invisible virus is suddenly compounded by the forgotten yet more familiar fear of getting caught in a random act of violence. 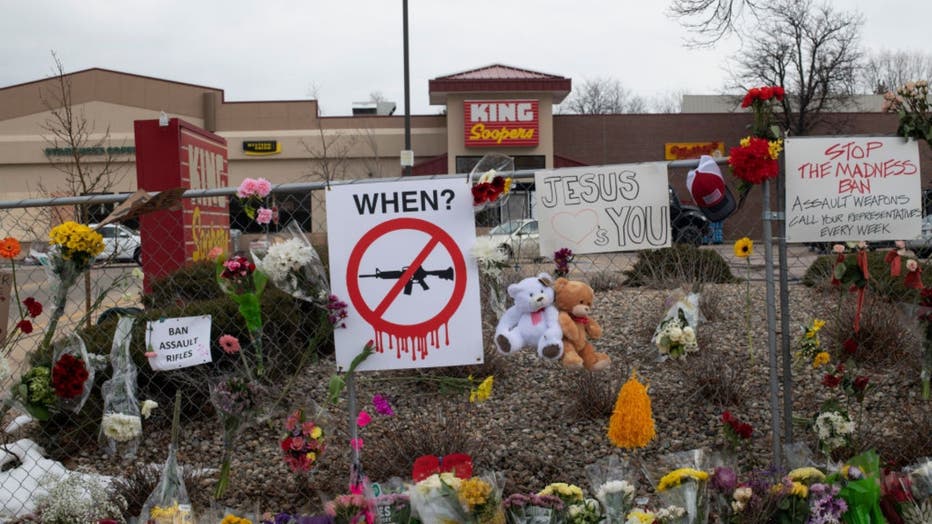 FILE - The memorial at the King Soopers on Table Mesa in Boulder, United States on March 24, 2021.

Despite what may seem like a sudden bombardment of mass shootings, gun-related homicides in midsized and big cities in America skyrocketed during coronavirus, and criminologists believe the pandemic and the socioeconomic loss in many communities are factors driving that trend.

A study by the Council on Criminal Justice tracked a 30% increase in homicides overall in a sample of 34 U.S. cities in 2020, as well as an 8% increase in gun assaults.

Here are the 13 mass shootings that took place between May 7-9 alone:

RELATED: 2 arrested in shooting near 10th and Walker, police say

RELATED: Four people in serious condition after being shot on Detroit's west side

More than 21 million people completed a background check to buy a gun last year, shattering all previous records, and a survey found that 40% identified as new gun owners — many of whom belong to demographics not normally associated with firearms, according to the National Shooting Sports Foundation, a firearm industry trade association. Purchases of guns by Black Americans increased 58% over 2019 and sales to Latinos went up 46%, the group said.

Gun advocates tie the increase in gun sales to pandemic anxiety and a loss of faith in the ability of police officers and government institutions at all levels to keep the public safe amid what at first was a little-understood, invisible menace.

Tim Schmidt, president and founder of Wisconsin-based U.S. Concealed Carry Association said he had "mixed feelings" about the surge in first-time buyers.

RELATED: ‘This has to end’: Biden urges Senate to bring gun control bill to floor ‘now’ in wake of FedEx shooting

"On the positive side, I'm excited that a lot of people have become new gun owners. Oftentimes, a person does not become a gun owner until something bad happens in their life… but in this situation, most of these people, nothing bad happened to them, but rather society, in general, is making them feel nervous," Schmidt said. "I just hope that these people are taking it serious in terms of the amount of education and training and commitment that it really takes to be a responsible gun owner."

Some experts believe that there is a clear first step towards understanding the country’s gun violence epidemic: to declare instances of mass violence public health issues.

"How can we learn to live with the guns, whereas right now we’re dying with them?" said David Hemenway, a professor of health policy at Harvard University. "The public health approach in a one-sentence description is, ‘Let’s make it really easy to be healthy and really difficult to get sick and injured.’ We have to agree we have a big problem and it’s a societal problem. Then, there are so many things we can talk about."

"When you see people getting killed, I mean, in this last month, it’s just been horrifying what’s happened. How can you say that’s not a public health issue?" Fauci said.

President Joe Biden also called gun violence a "public health crisis" when he announced in April a set of executive actions and proposals on gun control. He insisted the actions do not contravene Second Amendment rights.

RELATED: Supreme Court to take up right to carry gun for self-defense

"I also urged Congress to hear the call of the American people – including the vast majority of gun owners – to enact commonsense gun violence prevention legislation, like universal background checks and a ban of weapons of war and high-capacity magazines," Biden continued in an April statement. "Too many Americans are dying every single day from gun violence. It stains our character and pierces the very soul of our nation."

Biden has taken some executive actions on guns, targeting homemade "ghost guns" and the stabilizing braces for handguns that allow them to be fired from a shoulder, like a rifle. He has not proposed new legislation to revoke gun manufacturers’ liability protections or to toughen federal background checks, despite pledging to send such legislation to Congress on his first day in office. Instead, he’s supporting legislation proposed by House Democrats.

But that bill, approved by the House, is sitting in the Senate — and that’s where the vote counting gets tricky for the Biden White House.

RELATED: Boulder shooter was allegedly 'chuckling' to himself as he murdered ten people: report

Legislation on guns and policing cannot be considered in Congress via the budget reconciliation process, the route that Democrats took to pass virus relief with just their party’s 50 votes in the Senate. That’s the same way they appear on track to tackle infrastructure. That means Democrats would need 10 Republicans to join them to pass the firearms or police legislation under current Senate procedures.

"I strongly, strongly urge my Republicans friends in the Congress who refuse to bring up the House-passed bill to bring it up now," Biden said in April, referring to the gun control measure. "Who in God’s name needs a weapon that can hold 100 rounds, or 40 rounds or 20 rounds. It’s just wrong and I’m not going to give up until it’s done."

Josh Horwitz, executive director of the Coalition to Stop Gun Violence, said that while "I always want the Biden administration to do more," he doesn’t see a "lack of effort" from Democrats in Congress or in the White House.

The White House is in frequent contact with gun control advocacy groups. Most say they are pleased with the first round of executive actions Biden took and cautiously optimistic about his promise to work to pass legislation on Capitol Hill.

"I think the key question is how much pressure we’re going to be able to put on Senate Republicans. How many more daily gun violence episodes, how many more mass shootings, are we going to have to watch?" Horwitz said. "The ship of state takes some time to turn — but we don’t have time because people are dying every single day."

Fox News and the Associated Press contributed to this report.